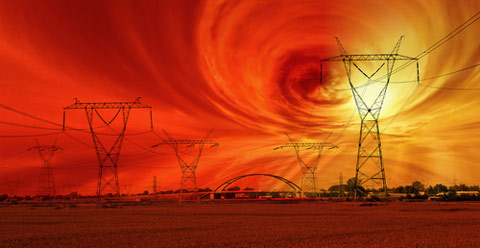 Thought it couldn’t happen here? Well it just did.

A major geomagnetic storm – triggered by a solar mass coronal ejection – just took place this week on a massive scale – creating a level 4 event that produced brilliant auroras (visible in the sky over northern parts of North America and Europe) as well as significant solar-magnetic distortions in the atmosphere:

The Earth is being battered by a huge solar storm, which could disrupt the power grid and GPS as well as letting people see beautiful auroras.

A potent blast of magnetic plasma shot out of the sun on Sunday, travelling faster than usual, according to the US National Oceanic and Atmospheric Administration (NOAA). It brought with it the biggest solar storm at least since March, and perhaps since September 2005.

The solar weather brought with it aurora — spectacular lights that could be seen over the US overnight. (source)

Astronauts and northern dwellers tweeted photos of the amazing light show it produced:

Reuters reported on the severity of the storm, suggesting the power of solar events, and ultimately the vulnerability of our fragile civilization and its unprotected electric grid:

On Sunday, during the summer solstice, a huge blast on the sun sent coronal mass ejections in our direction, which reached Earth on Monday afternoon [and] could go on throughout Tuesday.

The geomagnetic storm was classified G4, the second-highest possible degree – the last on such a scale happened in March, when auroras were seen as far south as New Mexico.

An event on a slightly larger scale – categorized as a G5 event – which scientists agree could happen anytime and may be imminent in the next 30 years – would be enough to disrupt the power grid and cut off our ties to modern electronic society.

This massive and brilliant solar storm should double as a dire reminder as to why an EMP threat to civilization is perhaps the most relevant wide-scale existential crisis.

To put it simply, a truly massive solar magnetic event could trigger devastating consequences – tens of millions could starve, while billions could face prolonged periods – perhaps years and even a decade without a restoration of power, essential services and other modern luxuries.

Experts have warned that ‘within one year 9 out of 10 Americans would be dead.’

Natural News pointed out the stark realities, and reminded people of the sober necessity to prepare – not only by stockpiling weapons, ammo and supplies, but by leading a more self-reliant lifestyle.

The question is: Are you ready if and when the grid goes down? How long could you survive without electricity?

The sobering reality is that the majority of the U.S. population is totally unprepared for such a scenario, particularly those living in large cities.

The only protection is to become as self-sufficient as possible, and this is crucial not only because of the threat of solar flares, but also a number of other possible scenarios in which we can no longer depend on the grid.

However, prepping for a grid failure or other disasters is not something one can do overnight. And it’s not all about stockpiling water, food, guns and ammo.

It’s more about changing one’s overall mindset and slowly beginning to become self-reliant in both thoughts and actions. Even those living in urban areas will have a chance at survival if they begin making the necessary changes in thinking and lifestyle. (Read more at NaturalNews.com)

As SHTF has previously reported, transitioning to a lifestyle where you can grow your own food, and harvest your own energy (such as with solar panels) is key to avoiding the potentially deadly disruptions that a massive solar storm or manmade EMP attack could cause.

Living a more independent life in general minimizes the importance of the oh-so-vulnerable grid and offers greater freedom to individuals and communities who have brought the generation of power back home.

Decentralization and local, voluntary cooperation are the keys to survival before and after the “big event”… read more about that here.

Are you prepared? Because it really could happen, and it almost did.