BREATHING YOUR OWN EXHAUST: Vipers and Thieves!

This article was contributed by Tom Beck of  Portfolio Wealth Global.

The elites have BEEN WINNING for so long that they feel they’re invincible. This is exactly what ROMAN EMPERORS believed and what every monarch and dictator has felt at one point or another, but the MISTAKES BEING MADE by the Deep State agents, specifically in the fields of politics and social brainwashing, ARE PLAIN STUPID.

There’s no doubt that the Internet has made their existence known to many tens of millions. If you do not understand that the politicians we have, our most successful performers and influencers, our news media flow, our educational systems, and our cultural principles are CONTROLLED FROM ABOVE and impacted by clear agenda, you have not truly internalized the existence of the most powerful people of the past 100 years.

I want to be clear that this is no longer UP FOR DEBATE. We know, for a fact, that the stock market has been TAMPERED WITH by the Plunge Protection Team and by central banks. You can see how growth is continuing to outperform value for the LONGEST STRETCH of our lifetime.

The CLASSIC INVESTORS, the veterans, are out of the markets, though.

I will say it again: the well-known billionaires that normally outperform the index are sitting IN CASH. You can’t convince them to get bullish right now! 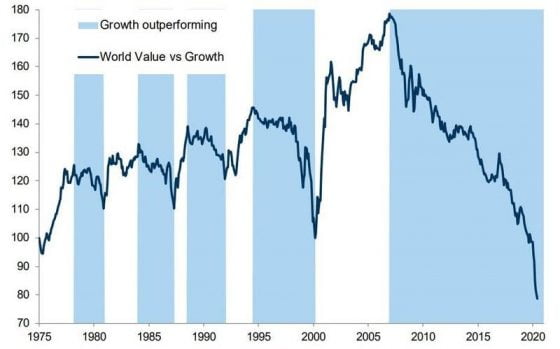 Do you want a textbook definition of a bubble? WE’RE IN ONE! If you’re calling it out like I am, you’re on the outside and you’re ACKNOWLEDGING THAT you’re fine with missing out on the upside because it will pop, leaving you with a real chance to buy cheaply.

The bubble isn’t over, though, since it is gathering momentum, so know that it still HAS WIND at its back. In fact, the biotech sector, which is one of its MOST VOLATILE subsectors, is shooting up.

As you can see below, the sector has done INCREDIBLY WELL in this century, and it just announced itself again, beating its 2015 all-time high, which tells you the TREND IS STRONG.

What this historically means is a SUBDUED GOLD market for a while. Biotech and precious metals are INVERSELY CORRELATED, so know the odds are gold has peaked for the time being and it will consolidate above $1,500 and gather momentum for its 2021 move. 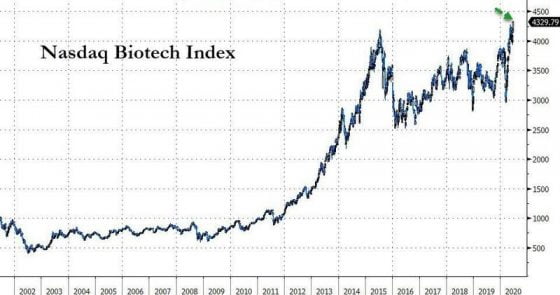 The ONE THING that could change all this is AN ELECTION STUNNER, which means a Biden victory.

That could CHANGE EVERYTHING, and I believe the Deep State is really going to FLOOR IT to make this a reality, but I’ve never seen a lousier candidate, so it will take MOUNTAINS OF PROPAGANDA to upset the status quo and TILT THE ODDS.

For now, buyers ARE CERTAIN that Trump will win and Powell will KICK INTO 6TH GEAR since their appetite for stocks is insatiable right now.

You can see how the markets are trying NOT TO SUCCUMB to the reality that COVID-19 and its unemployment disaster have inflicted; they are trying to go back to the FEBRUARY HIGHS, but it’s a foolish mistake. 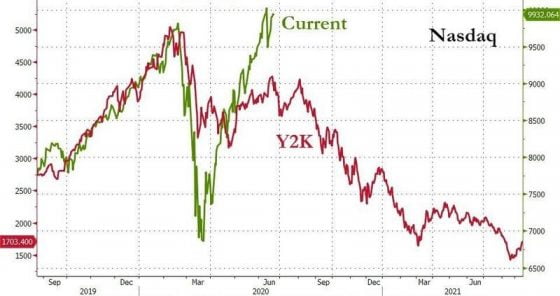 Sure, the COVID-19 bear market was artificial – it’s not really a natural market event, so we can’t refer to it as such, but we also CAN’T IGNORE the power grab and the CRAZINESS of the response.

By bailing out just about everyone in the name of social justice, the government and the FED have also created a class of companies that DON’T DESERVE to breathe another day.

Take a look at this:

These companies are RIDDEN WITH DEBT and they’re doing no good to you and I. They exist thanks to FREE MONEY, but they actually delay real growth.

The MMT lunatics are partying on the deck of the Titanic, but the iceberg cometh.

HAVE CASH on hand; this bubble has not burst yet.