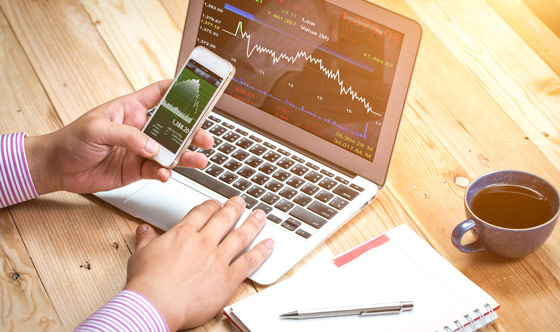 This article was originally published by Lior Gantz at the WealthResearchGroup.com.

There’s nothing that President Trump wants more than to see permanently low interest rates. To him, the risk in doing so is minimal, since most other countries are already implementing a similar strategy, without inflationary problems. When CEOs began deploying massive share buyback programs to prop up their company’s EPS results, the 2nd round of buybacks was much bigger, since the precedent was already set.

The pioneers might take the heat, but the followers have an easier time justifying their actions by saying that the other guy is doing it as well. When one child gets two scoops of ice cream, the other one wants the same and knows he is going to get it. Trump is pointing to Europe and Japan, saying they are injecting massive amounts of currency to their systems and wants to match their actions.

Trump wants what Obama had, which he defines as funny money to work with; he wants what Europe has, which are zero interest rates.

One small problem, though – the economy is really slowing: 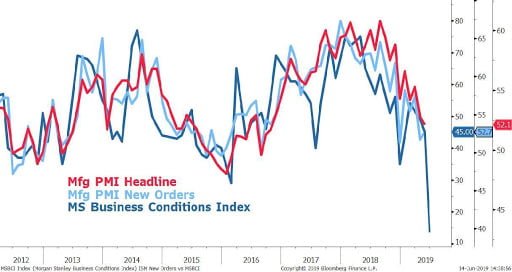 When the FED cut rates and stimulated the U.S. economy from 2009 up until 2015, there was so much slack and room for improvement that businesses were able to absorb the extra juice. It was like a car going downhill and every now and then, you squeeze the pedal a bit more, so the car runs a little faster. But right now, the car is on the highway, heading for a steep hill and lowering rates would be like shifting from 4th to 5th to 6th, which would make the RPM grind to a halt and cause the engine to shut down.

It might be the most dangerous proposition in this monetary experiment and Trump should be very careful with what he’s asking for.

Not only is the next 90-day period, historically, the worst of all when it comes to market returns (July 12th – October 12th), but the FED keeps tightening the balance sheet, letting bonds mature, but not reinvesting them, and selling Mortgage-Backed Securities. Therefore – AND DON’T GET CONFUSED – we’re tightening right now!

Even if the FED lowers rates, it’s not committing to the same aggressive easing and stimulus as it did before. Lowering rates into a hot economy that is slowing is like putting fuel into a nearly full tank – the impact isn’t that impressive.

Of course, Trump is worried about every detail of the economy, because that’s his ticket for getting Americans to vote for him again; so in his mind, when the question of higher rates or lower ones is contemplated, it’s a no-brainer.

To me, the global trend is clear: more NEGATIVE-YIELDING bonds are coming. 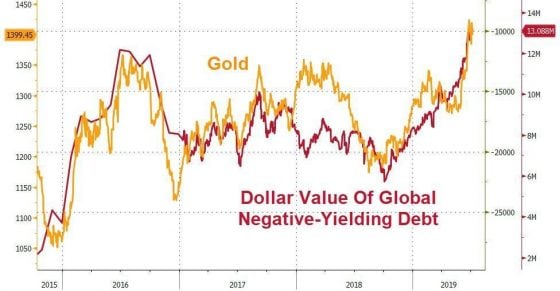 You can see that negative-yielding bonds bottomed right when gold did, in September of 2018 – which is how I knew that it was time to buy some physical and I picked up 50 Gold Eagles to add to my stack.

The trend is going to continue; all governments are going to issue MANY more bonds over the coming years as their economies slow, their tax receipts shrink, and their mandatory entitlement spending balloons.