When you’re done reading today’s letter, you’ll be left with a big decision to make, and my message to you is that instead of boxing yourself into a corner and making it today, you can choose to do as I have done throughout my career and diversify your assets, while “living” the environment and the economic conditions.

If you’re not buying that, you’re not alone; there are a few bears left out there, and here’s what they say:

It’s a giant house of cards is the bottom line for this camp and they mostly refuse to participate. 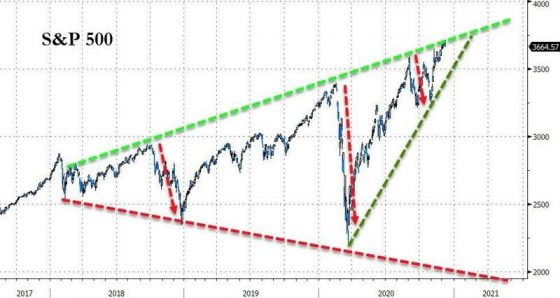 Big, macro-economic predictions are not money-makers. It’s extremely difficult to build a screenplay of how the global economy will behave and play your hand, going off one’s forecast.

Many have tried and failed this way; Ray Dalio, the famed hedge fund manager, has been underperforming indices for several years, ever since his switch to macro-economics, as a leading catalyst for results.

The fact of the matter is that many “brilliant” people said Bitcoin is a joke and have been eating their own s**t for missing out on an amazing boom. Plenty of billionaires scoffed at gold, while it has appreciated by 700% in the past 20 years!

Hundreds of hedge funds shorted companies, such as TSLA, only to lose their clients a bundle in the process.

The point here is that one better not comment on what one has no idea about. My chief conclusion from having been at the entrepreneurship, business building, and investing world in the past two decades is that intolerance is the greatest sin of the one whose goal it is to generate returns over time.

Evolution and the ability to admit mistakes, in order to grow, is perhaps the most vital trait of the winner – who isn’t tied to his opinions if they neither hold the water nor withstand the test of RESULTS.

Look at the chart above; it implies that a huge market crash is imminent, but it could also prove that a major surge is coming, breaking out of the resistance line.

What should one do, then?

What I do is live and breathe the action and make decisions, based on current circumstances, not future scenarios. If something makes sense today, I do it.

By definition, if every single day you do only what makes sense, your overall result will make sense.