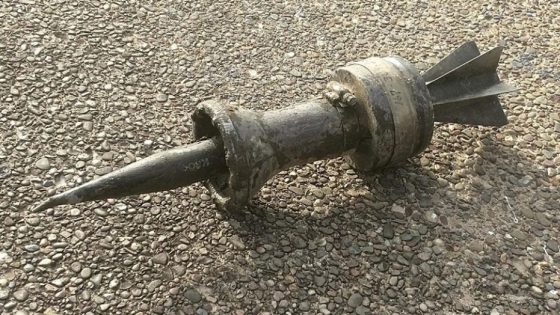 The Pennsylvania State Police bomb squad was called after an armor-piercing tank round was found by a jogger. The bomb squad was able to confirm the object was a Sabot projectile.

The jogger who saw the projectile flagged down police at about 1:30 pm on Sunday afternoon to report the finding of the strange object. It was found along the banks of the Susquehanna River in an area called Front Street River Walk in Harrisburg. “Officers identified the object as a possible tank Sabot projectile,” a police spokesman said. “The area was secured and notification to the Pennsylvania State Police Bomb Squad was made.”

Police also used a bomb K9 to make sure there were no other explosives in the area. Harrisburg Police issued the following statement about the incident:

“On 10/22/17 at 1325 hours, Harrisburg Police were flagged down by a jogger on the Front Street River Walk at Peffer Street. The jogger advised the officer of a strange object in the river bank. Officers identified the object as a possible tank Sabot projectile. The area was secured and notification to the Pennsylvania State Police (PSP) Bomb Squad was made.

At 1531 hours, PSP bomb technicians arrived and confirmed that the object was a Sabot projectile. The projectile was collected and taken into custody by PSP. An HPD bomb K-9 was summoned after the projectile was secured to verify that there were no other explosives in the area. No other objects were found.

This is an ongoing investigation. Anyone with information is asked to contact the Harrisburg Police or submit information through our Crime Watch Portal.”

The authorities have said that they are continuing to investigate this incident.