Body Cam Video: ISIS Terrorist Arrested In Florida After Attempting To Make Chemical Bomb: “I Am A Terrorist and I’m Part Of ISIS” 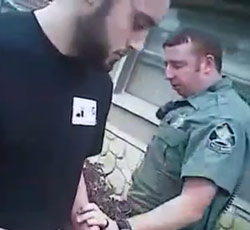 We’ve repeatedly warned that lone-wolf Islamic terrorists and ISIS-linked terror cells are actively operating in the United States. Though the Obama administration and their propaganda arms in the mainstream media have been notorious for their denials of these credible threats, often claiming recent attacks in the United States were the result of right-wing extremists, the fact is that the threat is real.

The latest evidence of this comes from Florida, where the The Pasco County Sheriff’s Office, FBI, the ATF and the Department of Homeland Security were called to the home of a man after reports of chemical fumes in the air. When law enforcement officials showed up on the doorstep of suspect Sherif Elganainy they were met with a violent individual who was apparently building a chemical device that may have been intended for Jihad. Elganainy attacked one of the Sheriff’s deputies and even attempted to take his weapon during the confrontation.

The entire incident was caught on an officer’s body cam:

According to officials, there is no immediate indication that Elganainy has ties to Islamic terrorists, but his mother suggests this may well be the case:

Paramedics were called to the home Wednesday morning after Elganainy’s father became unresponsive. After the father was taken to a hospital, his mother called deputies to ask them to check out suspicious fumes that she said may have contributed to her husband’s collapse. She also told deputies that when her son gets angry, he says he’s a “terrorist and I’m part of ISIS,” Nocco said.

Officers also found suspicious chemicals in Elganainy’s bedroom, according to the sheriff’s office, although Nocco wouldn’t say what the chemicals were.

When deputies tried to arrest Elganainy, he became violent, Nocco said. During the news conference, he showed a body cam video from one of the deputies. It included a deputy yelling “my gun,” when Elganainy tried to grab it.

Nocco said the deputy’s weapon was in a secured holster and the man couldn’t get it out of the holster. One deputy’s hand was broken and another was hit in the head during the melee.

Earlier this year U.S. Border Patrol officials confirmed that smugglers on the southern border have been moving “migrants” from terror hot beds into the United States. In 2014 a U.S. Congressman shared the news that four terrorists had been arrested on the southern border, though the Department of Homeland Security denied any credible threats.

Adding further credence to the notion that terrorists with ties to Al Queda, ISIS or Islamic radicalism are operating in the United States are two reports released earlier this year.

First, the Department of Homeland Security has placed a massive order for radiation detectors reportedly because they are concerned that nuclear devices may be transported into public areas. This follows a report out of Texas noting that game wardens near the southern border have been issued radiation detectors, presumably for the same reason.

Both of those reports came on the heels of a warning directly from the White House in which they highlighted the four ways terrorists could strike the United States with a radiological or nuclear device.

While the incident in Florida this week is related to what appears to be an attempt to build a non-nuclear IED by someone with ties to the Islamic State, it is a clear indication that there are individuals in the United States actively planning deadly attacks on the U.S. populace.

The U.S. government is obviously preparing for a large-scale attack, as indicated by their recent mega purchase of radiation detectors and other equipment. And though they haven’t yet raised the alarm, and perhaps will fail to do so until after the threat has become reality, the American public should take the possibility seriously by preparing for disaster on their own, including keeping CBRN-rated protective equipment in their emergency preparedness supplies.