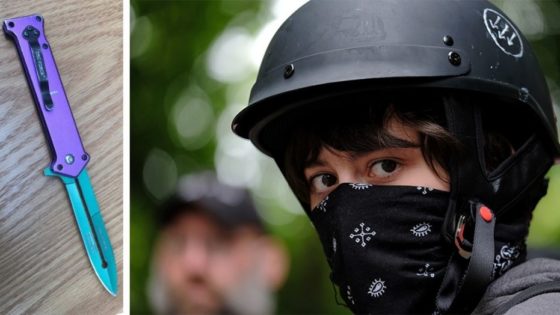 Violence broke out yesterday in downtown Portland, Oregon as sociopathic Antifa members stormed a Patriot Prayer Rally. Weapons, fireworks, and bottles, were all used by Antifa to cause harm to police and those participating in the gathering for prayer.

Patriot Prayer, which labels itself as a peaceful First Amendment advocacy group, organized the rally in Portland. “Tiny’s Freedom March,” was supposed to be a going-away event for Tusitala John Toese, who’s close with group leader Joey Gibson and was scheduled for 5 p.m.

Here’s a handful of Patriot Prayer here. There’s a few more standing outside the plaza. Most didn’t want to be interviewed. One man says they are here to celebrate freedom of speech and see a friend off who is moving out of the area pic.twitter.com/7EEtPSwk9N

The Rose City Antifa scheduled a counter-protest for 4 p.m. It was meant “to show Patriot Prayer, just as we showed them last year, that their violence and hatred has no place in Portland,” according to Antifa; whose violence and hatred is supposedly perfectly acceptable.

But Antifa isn’t too fond of people actually being free to express themselves non-violently, so they made sure to start some bloody fights with those who attended the march. Many of the Antifa activists wore black and covered their faces. Some protesters said they were demonstrating against police brutality; (by brutally attacking the police) one sign bluntly read “F— the police.” One demonstrator was taken away bloody and in zip-tie restraints.

According to Fox News, police said Sunday that while the city respects “the right to assemble,” anyone with weapons or anyone involved in violent activities was subject to arrest. Police also tweeted that “Weapons have been confiscated from protesters” and “Fireworks and bottles have been thrown at officers and participants.”

It was not immediately clear if Sunday’s demonstrations downtown resulted in any arrests, but photos and videos posted to social media showed protesters fighting and clashing, while some apparently were doused with pepper spray.

Things started to calm down later Sunday evening as police were able to mostly keep the two groups separated. At one point, both groups marched around the block, after which they reoccupied their respective spaces on opposite sides of the street and resumed yelling back and forth at each other.

Typical leftists showing just how tolerant they are by hatefully and violently showing just how much they hate violence and hate. The world could not come up with a more contradictory organization than Antifa if it tired. (Please don’t take that as a challenge.)