Bizarre Streak Over Naval Base: The Mystery Is Solved 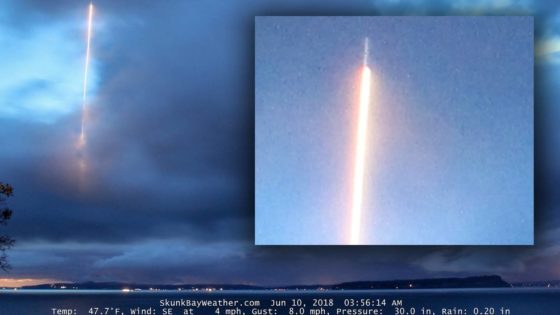 A mysterious and bizarre object has been spotted over a naval air base in Washington state. The appearance of the object has led to a lot of questions, but so far there have been no solid answers, but one website thinks they have the correct explanation.

Social media has been buzzing about the bizarre photo captured by Skunkbayweather.com, which is a local weather website that also runs a number of webcams located near Hanesville, Washington. The site’s cameras were set up to look across the Puget Sound at Whidbey Island from Skunk Bay and one of them captured time-lapses of the undeniably picturesque setting.

According to RT,  early on Sunday morning, at 3:56 am, Greg Johnson of Skunk Bay Weather managed to capture a mysterious vertical light streak on the northern Kitsap Peninsula. His 20-second exposure picture shows an orange-colored line with a luminous tail piercing through the clouds, appearing to be a launched missile.

My good night cam picked up what appears to be a large missile launch on Whidbey Island Sunday AM. I sat on it for a while. After sharing with Cliff Mass he did a blog on it. https://t.co/jBPXRtRGFP @NWSSeattle @WunderCave @WeatherNation pic.twitter.com/RnN8H3IsQ9

The Navy seems just as puzzled as the rest of the public over what they have seen. “There’s a lot of speculation around here,” Tom Mills, the spokesman from the Naval base, told Fox 59. “But it’s definitely not a missile launch.”

So what is it then? It certainly looks like a missile. There is one website that believes they’ve discovered the truth.

We noticed an air ambulance helicopter—an EC-135T2+ registered as N952AL belonging to Air Methods—flying right in the vicinity of the Skunk Bay when the image in question was captured.

You will notice that there is an error with the tracking of the low flying helicopter that makes it freeze on the screen momentarily and Flightradar24 even notes this automatically. Then the chopper seems to dash across the channel at unbelievable high speed. This is an anomaly with the tracking, and in reality, the helicopter made its way across the channel at normal speed (around 115 knots at 2,000 feet) right around the time the photo was snapped and exactly where the streak is shown.

The thing that looks like a rocket at atop a flame would have been a ‘ghost image’ of the part of the helicopter that was exposed from spill-over from its running lights and the low available light in the environment. This can look nothing like the actual object as the long exposure and how the light plays on the object can result in strange and often elongated shapes—in this case, something like a ghostly image of a rocket. -The Drive

So, the mystery is solved, apparently.  The Drive actually did an impressive job of looking into what this could have been, and you can read their entire assessment here.