BitCoin Down 50% In Massive Sell Off: Over $1 Billion Vaporized In a Few Hours

Just a few months ago the total net worth of all Bitcoins, a popular encrypted digital currency, was worth about $140 million. The non-tangible exchange mechanism is used by people all over the world to purchase everything from traditional goods and services, to illicit trade that may include drugs and stolen credit card numbers. The coins became a go-to digital store of wealth around the world after the meltdown of the Cypriot financial system, and was pushed as a ‘safe’ way to preserve wealth out of view prying government eyes. All of the excitement surrounding Bitcoin has driven the price of a single unit to in excess of $250, giving the total Bitcoins in global circulation a market capitalization of over $2.5 Billion in just a few months time.

Earlier this morning, Mike Adams of Natural News penned a warning to investors and those seeking privacy and wealth protection by utilizing the digitally encrypted BitCoin currency unit:

Bitcoin has become a casino. It is almost a perfect reflection of the tulip bulb mania of 1637 in these two ways: 1) Most people buying bitcoins have no use for bitcoins (just like tulip bulbs), and 2) The rapid increase in bitcoin valuations cannot be substantiated in any way that reflects reality.

In other words, there is no fundamental reason why bitcoins should be 2000% more valuable today than four months ago. Nothing has changed other than the craze / mania of people buying in.

When bitcoins were in the sub-$20 range, I was not concerned about any of this. I actually encouraged people to buy bitcoins and support the bitcoin movement. But alarm bells went off in my mind when it skyrocketed past $150 and headed to $200+ virtually overnight. These are not the signs of rational markets. These are warning signs of bad things yet to occur. (Via Infowars)

A few hours after Adams’ dire warning was posted, the crash he warned about has become a reality.

This morning, without warning, and moments after Bitcoin achieved its all time highs, the currency collapsed over 50%, essentially vaporizing upwards of one billion dollars in value.

This is what panic selling looks like – in real time: 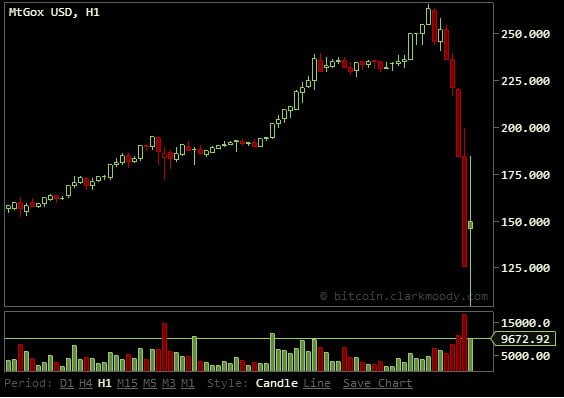 And given that there are no protective mechanisms for the alternative free market Bitcoin trade, the crash may not yet be over.

Will it stage an amazing recovery? Alas, for this particular bubble, there are no NYSE circuit breakers nor is there a Federal Reserve-mandated “plunge protection team.” And why should there be? The central banks hate all currency alternatives. Firehats: on, especially since the volume is still relatively lite. (Zero Hedge)

The momentum for Bitcoin has now turned to the downside, much like it did in previous crashes where the currency achieved new highs, and was promptly sold off by those who bought into the bubble early at rock-bottom prices.

While BitCoin may be a preferred method of keeping payments for services and products private through its crypto-mechanisms, it is still a non-tangible asset and it require brokers and the internet to function properly.

Touted as a safe haven store of wealth and a “gold standard of the internet age” by Forbes, tens of thousands of investors bought into the hype.

Today they are paying the price.

During times of financial and economic stability BitCoin may function just fine as a suitable mechanism of exchange. But these are not ordinary times. Interesting, yes. Stable, no. And thus, exchanging one’s assets and turning them into digital Bitcoins may not be the best choice of asset protection during periods of financial, economic and political turmoil and uncertainty.

Only physical assets – the kind we can hold in our hand – can truly be called safe havens.

Food in your pantry that you can consume at anytime.

Skills and labor you can barter for other goods.

Precious metals, which have stood the test of time over thousands of years.

Land on which you can produce food and alternative power.

These are the assets that provide a realistic level of safety and security.

These are money when the system crashes and confidence in the paper ponzi schemes around the world is lost.

Bitcoin is fine for certain types of transactions. But having funds in Bitcoin is, obviously, no different than a deposit account at a bank which can go under or a stock market prone to manipulation.

Get physical. It’s the only way to ensure your assets will really be there when you need them.