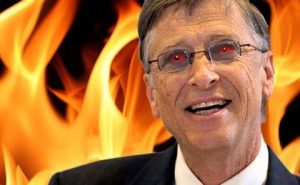 Bill Gates had some interesting takes on the COVID-19 hoax he helped pull off. One of which was his “disappointment” that poor countries are still largely unvaccinated.

Gates has repeatedly complained about the inequity of vaccine distribution worldwide, calling it the “biggest disappointment” to him during the pandemic and saying it “doesn’t make sense” to vaccinate low-risk people before older and vulnerable populations in poorer countries, he added. Considering his attempts to depopulate and sterilize people in Africa with vaccines, we shouldn’t be surprised that Gates is upset the vaccine isn’t being injected into poor countries. His attempts to cull Africans haven’t worked out all that well thanks to many African nations handling the hoax scamdemic better than expected. African nations have a longstanding familiarity with cheap and widely-available anti-parasitic and anti-malaria drugs.

Gates’ many vaccine-related NGOs have struggled to convince wealthy countries to pony up the funds to vaccinate poor countries and poor countries are unwilling to take his shots anymore. Have we finally learned our lessons?

Not to mention Gates himself has increased his net worth to $137 billion during the pandemic. Even after whining about going through a divorce and the most difficult year of his life. Right. Because there aren’t too many problems $137 billion couldn’t solve.  The billionaire attempted to bridge the class divide between himself and his readers, declaring 2021 had been “the most unusual and difficult year of his life,” while “suspect[ing] a lot of the people reading this might say the same,” according to a report by RT.

Except most of the slaves Gates talks down to lost almost everything and had their net worths and savings wiped out while he pushed the vaccines, has been a vocal advocate of depopulation of the slave class and earned more than is reasonable.

The tech mogul acknowledged that despite the rollout and mass uptake of Covid-19 vaccines around the world, more people had died with the virus in 2021 than in 2020, adding that the improvement in the pandemic situation this year had not been as “dramatic” as he’d hoped. So he’s admitting the precious “vaccines” don’t work? Or are they working as intended?