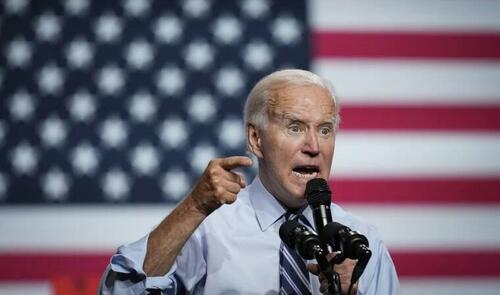 President Joe Biden said on Thursday that the threat of nuclear “Armageddon” is at its highest level since the Cuban missile crisis and that the US is trying to find an “off-ramp” for Russia before they begin the use of tactical nuclear weapons.

“We’re trying to figure out what is Putin’s off-ramp. Where does he get off? Where does he find a way out?” Biden said at a fundraiser in New York City for the Democratic Senatorial Campaign Committee at the New York home of James Murdoch, the son of News Corp. Chairman Rupert Murdoch.

“Where does he find himself in a position that he does not, not only lose face but lose significant power in Russia?”

“He is not joking when he talks about the potential use of tactical nuclear weapons or biological and chemical weapons, because his military is, you might say, significantly underperforming,” Biden added, according to Bloomberg. “I don’t think there’s any such thing as the ability to easily use tactical nuclear weapons and not end up with Armageddon.”

Are Biden’s comments related to why his admin is buying up to $290 million in anti-radiation drugs?

Putin has renewed his nuclear threats as he announced the annexation of Ukrainian territory, some of which Russia doesn’t control, and with the call-up of 300,000 reservists to reinforce his flagging invasion. “When the territorial integrity of our country is threatened, we will certainly use all the means at our disposal to protect Russia and our people,” Putin said in a televised national address. “This is not a bluff.” -Bloomberg

Biden’s dire language comes in stark contrast to his National Security Adviser, Jake Sullivan, who said last week that the US doesn’t Putin is serious.

“We do not presently see indications about the imminent use of nuclear weapons,” he said. “We are, of course, monitoring that carefully and staying in close consultation with allies and partners.”

Sullivan added that the US has warned of severe consequences if Russia uses nukes.