Ben Bernanke is My Hero and He Should Be Yours Too 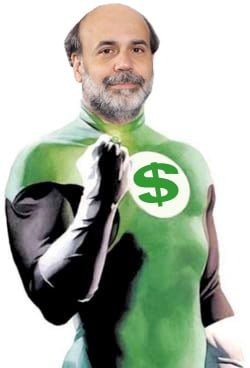 The Street contributor Dan Dicker says that Ben Bernanke is his hero.

(Watch the video below)

Mr. Dicker’s praise for Ben Bernanke stopped short of throwing on a cheer leader outfit and pom-pom – though this may have been bigger news had he done so.

My kids believe in the tooth fairy, the Easter bunny, Santa Claus and that Harry Potter can fly on a broomstick. But does their belief in these things actually make them real?

The very difficult task of tightening interest rates in 2010 should have happened much, much earlier. Mr. Bernanke, along with his predecessor(s) are among those responsible for the mess we are in today because of loose credit lending policies and total disregard for a strong currency.

They may be heroes to investment bankers and Dan Dicker’s friends, but they are more akin to villains from the perspective of the American people.