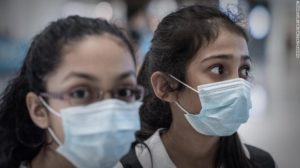 A whistleblower in the Canadian province of New Brunswick says that a new “mystery” illness is circulating among young people that is causing swift cognitive decline.

Interestingly, it has been happening for the past several years and really started picking up once the “vaccines” for the Wuhan coronavirus (Covid-19) emerged under Operation Warp Speed.

The Guardian describes it as “a progressive neurological illness” that afflicts young people with no prior history of health problems or triggers. Some of its symptoms include rapid weight loss, insomnia, hallucinations, difficulty thinking and limited mobility.

Right now, there are 48 official cases of the baffling illness under investigation. This unnamed illness was first announced in Spring 2021 right after Donald “father of the vaccine” Trump‘s fast-tracked injections started reaching the general population.

“I’m truly concerned about these cases because they seem to evolve so fast,” the whistleblower is quoted as saying. “I’m worried for them and we owe them some kind of explanation.”

The condition also appears to be contagious, in some cases. At least two people with close contact, but no genetic links, to official cases have developed similar symptoms out of the blue, suggesting that environmental factors might be at play.

The following recent cases are examples of this:

• A young man developed symptoms of dementia and ataxia. His wife, who became his caregiver, suddenly started losing sleep and experiencing muscle wasting, dementia, and hallucinations. Her condition is now worse than his.

• A woman in her 30s who is described as non-verbal now has to use a feeding tube and drools excessively. Her caregiver, a nursing student in her 20s, also recently started showing symptoms of neurological decline.

The whistleblower, who is an employee of the Vitalité Health Network, requested anonymity due to fears about repercussions for speaking out. This person did, however, still feel compelled to come forward.

“This is not a New Brunswick disease,” the person said. “We’re probably the area that is raising the flag because we’re mostly rural and in an area where people might have more exposure to environmental factors.”

The Special Neurodegenerative Disorder Clinic, also known as the Mind Clinic, is currently the clearinghouse for cases referred from both in the region and in nearby provinces. Doctors say they are “stumped” about the cause.

In an attempt to quell fears, officials said that eight known fatal cases of the baffling illness were the result of a “misdiagnosis,” not the disease itself. The victims who appear to have “caught” the mystery disease also supposedly died from “unrelated pathologies.”

Whether this explanation flies in the long term remains unknown. It will probably depend on how many more people develop it and whether or not it continues to grow or tapers off.

“The fact that we have a younger spectrum of patients here argues very strongly against what appears to be the preferred position of the government of New Brunswick – that the cases in this cluster are being mistakenly lumped together,” said a scientist from Canada’s public health agency who specializes in neurodegenerative illnesses but who is unauthorized to speak in an official capacity.

New Brunswick officials are reportedly refusing to test for suspected environmental factors, which has led some area residents to speculate that there is some kind of political coverup taking place.

“If a group of people wanted to breed conspiracy theorists, then our government has done a wonderful job at promoting it,” said Laurie Beatty, the father of one victim who died not long after developing mental confusion that resulted in rapid deterioration.