“Back To The Old Days”: Europeans Panic Buy Firewood And Stoves 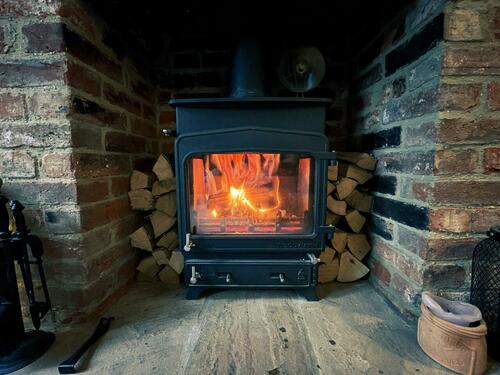 As natural gas and electricity prices soar, many European households turn to firewood, a move to offset higher energy costs as the heating season begins. Rising demand for firewood is sending much of Europe back to the ‘medieval’ days of using stoves and fireplaces to heat homes.

The sabotage of the Nord Stream pipeline system underneath the Baltic Sea from Russia to Germany sparked even more energy uncertainty among Germans as many brace for what could be the coldest and possibly even the darkest winter in a generation due to rising risks of power blackouts.

On Friday, European Union leaders failed to agree on a price cap for NatGas as the energy crisis might worsen this winter as freezing weather could quickly draw down supplies from storage facilities and catapult prices even higher.

About 70% of Europeans use NatGas to heat their homes, and according to Bloomberg, some 40 million people are now burning wood to heat their homes. New demand for a heat source that’s been around for ages has doubled the price of wood pellets per ton to 600 euros in France.

Bloomberg pointed out Europeans are “panic buying the world’s most basic fuel.” Demand is so high that Hungary banned exports of wood pellets, and Romania capped firewood prices through spring.

“It’s back to the old days when people wouldn’t have the whole house heated,” said Nic Snell, managing director at British wholesale firewood retailer Certainly Wood. He added firewood is in high demand.

The boom for firewood has also meant stove demand is high. Gabriel Kakelugnar AB, a manufacturer of high-end tiled stoves, said orders had surged more than fourfold, and customers have to wait until March for delivery.

Firewood has become a scarce commodity this heating season, forcing some households to burn anything they can find:

“We are worried that people will just burn what they can get their hands on,” Roger Sedin, head of the air quality unit at the Swedish Environmental Protection Agency, said.

In fact, this is true, Polish households have started to burn trash and coal as firewood supplies dwindle.

The UK has finally come around to informing its citizens about power blackout risks. The country’s grid operator warned about the “significant risk” of NatGas shortage that could trigger three-hour power cuts this winter.

Well before the heating season, we detailed in length about soaring demand for firewood. We noted in August that “Google Searches For “Firewood” In Germany Have Exploded” and even in July cited Deutsche Bank senior economist Eric Heymann who indicated a “substitution for gas” would be firewood.

Europeans have to ask if soaring electricity bills and a cost-of-living crisis are worth supporting NATO’s proxy war in Ukraine via sanctions against Russia. People in Prague are already tired of Western sanctions that have devastated their economy and financial well-being.