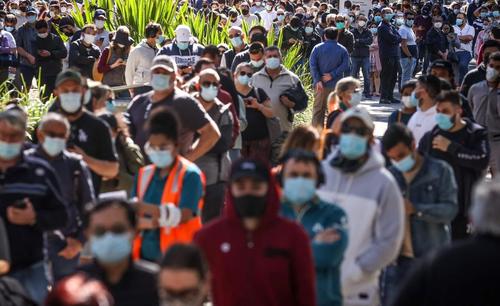 New South Wales, Australia’s most populous state, suffered one of its darkest days yet over the weekend, as it reported 478 new cases, and 7 deaths, during a single 24-hour period. The worsening outbreak has raised concerns about the potential impact on Australia’s mostly unvaccinated aboriginal population.

Elsewhere in Australia, public health officials have confirmed another 19 new cases in Canberra, which imposed its first lockdown in more than a year last week. That lockdown has already been extended by 2 weeks, as paranoia over the delta variant is amplified by Australia’s relatively low vaccination rates.

Daniel Andrews, the Premier of Victoria, asserted Monday that authorities wouldn’t hesitate to go “door-to-door” in their efforts to help carry out mandatory COVID tests on Australians.

Andrews made the comments during a press conference, where he doubled down on his commitment to pursue Australia’s ludicrous “zero COVID” policy, which requires draconian, economy-crushing lockdowns in response to just a handful of new cases.

“This is a difficult conversation to have with people now, in an almost threatening tone, when people who want to get vaccinated can’t because we don’t have enough stuff. There will come a time though when I think restrictions will apply to those who have not been vaccinated, rather than restrictions applying to all of us.”

Andrews also signaled that those who refuse to take the vaccine could be forced to submit to lockdown rules indefinitely.

“This is a difficult conversation to have with people now, in an almost threatening tone, when people who want to get vaccinated can’t because we don’t have enough stuff. There will come a time though when I think restrictions will apply to those who have not been vaccinated, rather than restrictions applying to all of us.”

Aussies have also been told not to go anywhere near their grandkids and not to engage in conversation with each other, even if they’re wearing masks.

Let’s not forget: one Australian was involuntarily admitted to a mental institution in Australia after refusing to get the COVID jab. The patient was “involuntarily” taken to a hospital in Perth, where he was told that he had suffered a “nervous breakdown.”

So far at least, it doesn’t look like it’s had much success. But Australian authorities are unfazed.

The results of seven weeks of lockdown in Sydney (NSW cases) pic.twitter.com/zQCdXzNy7q

In other lockdown news, Victoria, which includes the city of Melbourne, tightened its lockdown restrictions, imposing a curfew of 2100 local time to 0500 and closing outdoor playgrounds. The Northern Territory, whose capital is the city of Darwin, went into a snap 72-hour lockdown after the discovery of a single asymptomatic infection.