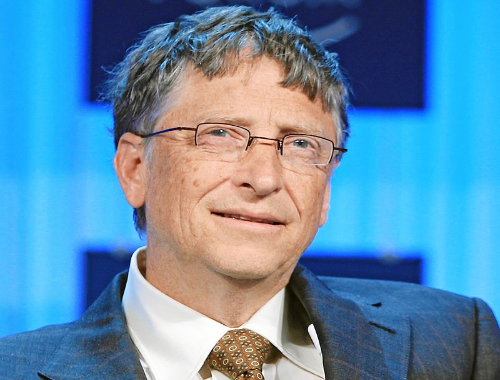 The multibillionaire has been reported to have partnered with UKAid, a challenge fund designed to support the United Kingdom’s commitment to reducing poverty and controlling food sources for the world’s poorest. He reportedly donated tens of millions to the organization to push for genetic modification (GM) of farm animals.

In January 2018, the co-founder of the Bill & Melinda Gates Foundation visited the University of Edinburgh‘s Langhill Farm to launch the school’s Global Academy of Agriculture and Food Security.

“It’s not just about agriculture and food supply systems, but about politics, governance, conflict, environmental change – so many different aspects of it,” said Geoff Simm, a professor from the university.

In the video of Gates’ visit, a prominent sign can be seen. It reads: “One Planet. One Health. One Chance.” For the uninitiated, “One Health” is an ideology that EcoHealth Alliance President Peter Daszak, renowned economist Jeffrey Sachs, and retired White House Chief Medical Advisor Anthony Fauci promote.

“It is a scheme designed by the Centers for Disease Control and Prevention (CDC) and World Economic Forum (WEF) to usher in the Great Reset by taking over management of agriculture, both livestock and plants, wild lands and the animals that live in them,” the Expose reported.

According to Reuters, Gates is also investing $40 million to develop livestock vaccines and make them accessible to the poorest small-scale farmers across Africa and South Asia through the Global Alliance for Livestock Veterinary Medicines (GALVmed), a public-private partnership based in Edinburgh.

Additionally, as reported by the New York Post, Gates wants to take genes from British cattle and infuse them with DNA from African breeds to create a cow that can thrive anywhere. “Livestock is magical. You can sell the output and that’s money for school fees. You can keep the output and that’s diet diversification,” he said.

Incidentally, Gates has acquired 270,000 acres of land throughout America, according to last year’s edition of the Land Report 100, an annual survey of the nation’s largest landowners. He has his eye on farming in Sub-Saharan Africa and South Asia as well. (Related: Bill Gates granted legal approval to purchase 2,100 acres of farmland in North Dakota.)

Analysts are now connecting the dots on his agenda on the mass vaccination/gene-modification projects of livestock and his purchases of farmlands. Critics can’t help but worry that the global elite’s agenda of targeting food supply is slowly being carried out.

In January 2020, the Gates Foundation announced the creation of a non-profit entity called Gates Ag One, which aims to “speed up efforts to provide smallholder farmers in developing countries … with access to the affordable tools and innovations they need to sustainably improve crop productivity and adapt to the effects of climate change.”

The launch came shortly before the failure of the Alliance for a Green Revolution in Africa (AGRA), which was founded in 2006 by the businessman’s foundation as well as the Rockefeller Foundation.

“Apart from the obvious financial return on his investment, why else would Gates be interested in genetically engineering livestock? While we don’t know the inner workings of the minds of the globalists, we could consider a couple of theories which, ultimately, end with the same result – ownership, and control by a few self-appointed elites with Gates as their frontman,” the Expose‘s Rhoda Wilson commented.

One possible goal of Gates in pushing the GM of farm animals is to decimate them and force people to eat lab-grown inorganic substitute foods in the future, essentially eliminating the people’s freedom to choose.

Watch the video below that talks about Gate winning the legal approval of buying a huge swath of lands in North Dakota.

This video is from Martin Brodel’s channel on Brighteon.com.