This article was submitted to ZeroHedge and originally published at The Machine Gun Nest (TMGN). 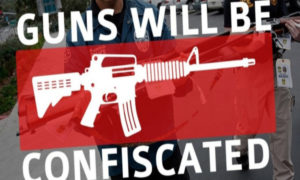 A Registry of guns and gun owners is a tool that the federal government, the DOJ, and the ATF have had on their wish list for decades now. Anti-gun politicians and lobbyists have sold a registry as a tool for stopping crime, enforcing universal background checks, and ensuring public safety.

In reality, a Registry guarantees that large-scale confiscation will happen at some point. That’s why the ATF is forbidden explicitly from keeping a searchable database by law.

Today, Gun Owners of America announced that the ATF has nearly 1 Billion records of firearm purchases, with over 850 million of those records in digital format. These records contain all sorts of personal information on gun owners in addition to the gun they’ve purchased. Important personal information, including their names, addresses, place of birth, sometimes even social security numbers, can all be found on these records.

The firearm transaction records that the ATF is referring to is the ATF Form 4473. Federal law currently states that a firearms dealer can destroy 4473 forms after 20 years. If a firearms dealer goes out of business or closes before those 20 years, federal law says dealers must hand over those forms to the ATF.

So the ATF currently is in possession of nearly 1 Billion of these records. Here’s the direct quote attributed to the ATF from GOA: “In total, ATF manages 920,664,765 OBR as of November 2021. This includes digital and an estimated number of hard copy records that are awaiting image conversion. It is currently estimated that 865,787,086 of those records are in a digitalized format.”

So over 850 million of those records are in digital format, making them easier to search. GOA claims this constitutes a “partially complete database of guns and gun owners.”

So how does the ATF justify this massive privacy invasion of gun owners? They claim that “the vast majority of criminal firearms traces are done for state and local law enforcement agencies pertaining to active investigations.” But interestingly, in true Federal Government style, they also mention that they have no idea how effective this system is and if any of the information leads to the successful prosecution of gun crimes.

This lack of information is especially interesting considering that the Biden DOJ wants to change the regulation on firearms dealers so that they can never destroy gun transaction records. It should be exceedingly obvious that their goal is, of course, a complete registry of all firearms in the United States. What we are witnessing are small steps towards that goal.

We here at TMGN have been warning people about this change back in 2020 when the ATF changed form 4473 to include both firearm & personal information on the front page. I felt that the only reason for this change was data collection and the ease of digitizing a paper form, but now it’s exceedingly evident that theory was correct.

This is why it is crucial for gun owners to get involved and make sure they’re calling their members of Congress, getting out and making their voices heard, or even donating to a group that will fight on their behalf. If we don’t push back on these infringements, the ATF will track gun owners down the road and move to confiscate our firearms.

This database is especially worrying with the current situation with the ATF classifying Rare Breed Firearms’ Forced Reset Triggers as machine guns and working to confiscate them from dealers and citizens alike.

Keep in mind that with the push to regulate semi-automatic firearms as machine guns, a registry would be a handy tool for confiscation. When you consider that confiscation of firearms is the end goal, it’s no wonder the ATF is pushing so hard to keep a database of gun owners.