Astronomer Warns: Earth Could Be Crushed By Particle Accelerator 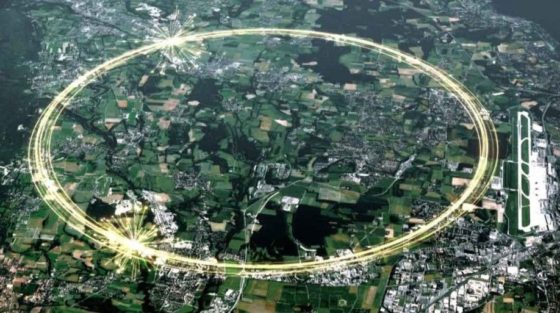 The Large Hadron Collider, which is a particle accelerator, shoots particles at incredibly high speeds, smashes them together, and scientists observe the fallout. According to Science Alert, these high-speed collisions have helped us discover a lot of new particles, but according to Rees, these discoveries come with several risks to humanity. In a new book, called On The Future: Prospects for Humanity, he gives some pretty dire possible outcomes of this type of advancement in science.

“Maybe a black hole could form, and then suck in everything around it,” he writes, as Sarah Knapton reported over at the Telegraph. “The second scary possibility is that the quarks would reassemble themselves into compressed objects called strangelets. That in itself would be harmless. However, under some hypotheses, a strangelet could, by contagion, convert anything else it encounters into a new form of matter, transforming the entire earth in a hyperdense sphere about one hundred meters across.” That’s about the length of one soccer field or 330 feet.

But there’s an even more sinister way that Earth could be destroyed by the particle accelerators built on it. According to Rees, this would be a “catastrophe that engulfs space itself.”

“Empty space – what physicists call the vacuum – is more than just nothingness. It is the arena for everything that happens. It has, latent in it, all the forces and particles that govern the physical world. The present vacuum could be fragile and unstable,” Ress said.  “Some have speculated that the concentrated energy created when particles crash together could trigger a ‘phase transition’ that would rip the fabric of space. This would be a cosmic calamity, not just a terrestrial one.”

But CERN alleges that there is no cause for concern. “The LHC Safety Assessment Group (LSAG) reaffirms and extends the conclusions of the 2003 report that LHC collisions present no danger and that there are no reasons for concern,” CERN writes on their website. “Whatever the LHC will do, nature has already done many times over during the lifetime of the Earth and other astronomical bodies.”

The late Stephen Hawking even said the hadron collider is not a bad thing. “The world will not come to an end when the LHC turns on. The LHC is absolutely safe. … Collisions releasing greater energy occur millions of times a day in the earth’s atmosphere and nothing terrible happens,” said Hawking.

“Nevertheless, physicists should be circumspect about carrying out experiments that generate conditions with no precedent, even in the cosmos,” Rees writes.