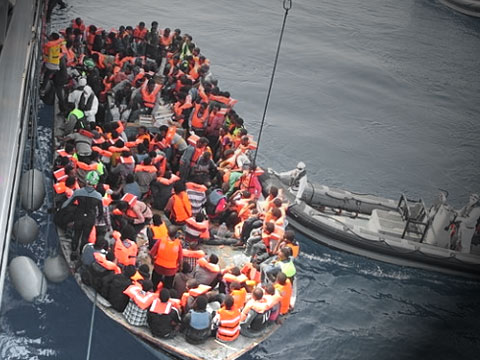 “For us, ISIS, al-Nusra, and all similar organizations which carry weapons and kill civilians are extremist organizations.”

Assad argued that Turkey is pouring Western-sponsored terrorism across the Syrian border and prolonging the violence, by delivering weapons, money and training. This synthetic terrorism is what is directly enabling both ISIS itself, and dubious organizations linked with violence on the al-Nusra front and inside the so-called “rebel” groups fighting Assad in a Cold War 2.0 proxy war.

To say that the border with Turkey should be free of terrorism means that terrorism is allowed in other regions. That is unacceptable. Terrorism should be eradicated everywhere; and we have been calling for three decades for an international coalition to fight terrorism. But as for Western cooperation with the al-Nusra Front, this is reality, because we know that Turkey supports al-Nusra and ISIS by providing them with arms, money and terrorist volunteers. And it is well-known that Turkey has close relations with the West. Erdogan and Davutoglu cannot make a single move without coordinating first with the United States and other Western countries.

Al-Nusra and ISIS operate with such a force in the region under Western cover, because Western states have always believed that terrorism is a card they can pull from their pocket and use from time to time. Now, they want to use al-Nusra just against ISIS, maybe because ISIS is out of control one way or another. But that doesn’t mean they want to eradicate ISIS. Had they wanted to do so, they would have been able to do that. For us, ISIS, al-Nusra, and all similar organizations which carry weapons and kill civilians are extremist organizations.

The reality is harsh and stinging. The use of the terror card by the United States has captured the population and held them in a bizarre ‘War on Terror’ that is based upon reacting to manufactured violence and horror, justifying the comment that “terrorism is a card they can pull from their pocket and use from time to time.”

Via the Daily Sheeple

“It’s not about that Europe didn’t accept them or embrace them as refugees, it’s about not dealing with the cause. If you are worried about them, stop supporting terrorists. That’s what we think regarding the crisis. This is the core of the whole issue of refugees,” he said.

After all, you do realize the US helped fund and train ISIS, right? (the daily sheeple)

The Game Changer: Syria Will Strike Israel Should U.S. Attack

Russia:”Syria Will Be Armed With Weapons That Have Never Been Seen Before In the Middle East”