As Prominent Republicans Betray Trump, The Media Urges Americans To Get Ready For “President Mike Pence” 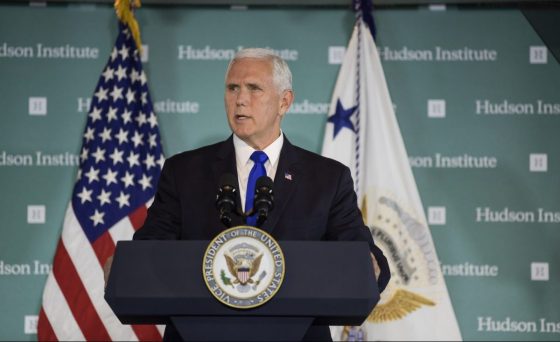 Impeachment mania is reaching a fever pitch in Washington, and as I reported a couple of days ago, the Democrats are hoping to have articles of impeachment ready for a House vote around Thanksgiving.  But in order to impeach the president of the United States, you need to have an impeachable offense first, and even if everything that is being alleged is 100 percent true there is simply no impeachable offense in this case.

In recent days there has been a lot of talk about “the integrity of our elections” and Donald Trump has been accused of “betraying his oath of office”, but top Democrats never seem to publicly bring up any specific law that Trump has violated.  The U.S. Constitution sets a high standard for impeaching the president, and unless that standard is met, impeachment proceedings should not go forward.  Some progressive writers have attempted to suggest that Trump is guilty of bribery, extortion, obstruction of justice or a campaign finance violation, but none of those crimes comes anywhere close to fitting the facts of this case.  Democrats may have been offended by what Trump said during his call with the president of Ukraine, but being offended is not enough to impeach someone.

Joe Biden and his son were clearly involved in some very shady things in Ukraine, and there is nothing wrong with Trump encouraging the president of Ukraine to look into those things.

Considering the current political climate in Washington, it may not have been the most advisable thing to do, but Trump certainly did not break any law.

And if the Republican Party was 100 percent united behind Trump, this entire saga would go away very quickly.  Once Democrats realized that there was zero chance of a successful vote in the Senate, the momentum toward impeachment would completely fizzle out.

But that isn’t happening.  In fact, a Republican member of the House just announced that he is publicly supporting the impeachment inquiry…

Rep. Mark Amodei supports the House’s inquiry into whether President Donald Trump should be impeached, but is withholding judgment on whether Trump has crossed the legal line.

“Let’s put it through the process and see what happens,” Amodei, the only Republican in the state’s congressional delegation, said on a call Friday with reporters, adding that he believes Congress is justified to look into the matter.

“I’m a big fan of oversight, so let’s let the committees get to work and see where it goes,” he added.

Two Republican governors recently announced they are in favor of the impeachment inquiry into President Trump, which makes them the very first members of the Republican Party to publicly voice support for the investigation.

Vermont Governor Phil Scott was the first GOP chief executive to throw his support behind the impeachment proceedings, saying he is not surprised by the president’s alleged actions. However, Scott warned Democrats to stay focused on the facts. He emphasized that the inquiry needs to be objective and should not be based on political motivations surrounding the upcoming election.

In addition, Republican presidential candidate William Weld is making headlines all over the world by suggesting that President Trump deserves the death penalty…

During an interview on MSNBC’S Morning Joe, he claimed: ‘Talk about pressuring a foreign country to interfere with and control a U.S. election, it couldn’t be clearer.

‘And that’s not just undermining Democratic institutions, that is treason. It’s treason pure and simple and the penalty for treason under the U.S. code is death.’

Personally, I don’t think that Weld even understands the definition of “treason”, and he should be completely and utterly ashamed of himself for suggesting such a thing.

In the end, what is really going to matter is what Republicans in the Senate think.  If there is a vote on articles of impeachment on the House floor, Nancy Pelosi is going to make sure that vote is successful.  Then this matter will go to the Senate, and it will take 67 votes to remove Trump from office.

Of course Democrats only have 47 seats in the Senate, and so you would think that this should be an insurmountable obstacle.

But the truth is that there are a lot of establishment Republicans in the Senate that do not like Trump at all, and it is being suggested that many of them may be willing to vote against Trump…

Former Republican Senator Jeff Flake said that he thinks at least 35 Republican senators would vote for President Donald Trump to be removed from office if they could vote in private.

Speaking at the 2019 Texas Tribune Festival Thursday, Flake was responding to comments made by Republican political consultant Mike Murphy on MSNBC who said that if there was a secret vote, at least 30 GOP Senators would back impeachment.

I warned that we could be facing this sort of scenario if we didn’t send the right people to Washington, and now Donald Trump’s fate could end up in the hands of a group of RINOs that do not feel any sense of loyalty to Trump at all.

And at this point the mainstream media smells blood and they are salivating over the prospect that Donald Trump could soon be removed from the White House.  In fact, B.J. Rudell is suggesting that it is time for Republicans “to rally around President Mike Pence”…

Republicans might still determine that abandoning Trump — and likely the presidency — is their best hope for preserving some power in Washington. But the longer they wait, the more politically damaging the breakup will be. End it now and there’s still time to rally around President Mike Pence and perhaps broaden the party’s appeal with the selection of a new vice president.

But the only way that Donald Trump is going to be removed from office is if he is voted out by the Republican-controlled Senate.

The Trump faction would be at war with the establishment faction, and it might even result in a split into two separate political parties.

Meanwhile, the Democrats would be laughing the entire time, and they would sweep the 2020 elections in a landslide of epic proportions.

Sadly, the truth is that more evidence continues to come out that indicates that this entire thing is a setup.  The Federalist’s Sean Davis has just pointed out that someone quietly altered the intelligence community whistleblower complaint form to allow submissions by individuals with no first-hand knowledge of the underlying evidence…

Between May 2018 and August 2019, the intelligence community secretly eliminated a requirement that whistleblowers provide direct, first-hand knowledge of alleged wrongdoings. This raises questions about the intelligence community’s behavior regarding the August submission of a whistleblower complaint against President Donald Trump. The new complaint document no longer requires potential whistleblowers who wish to have their concerns expedited to Congress to have direct, first-hand knowledge of the alleged wrongdoing that they are reporting.

The brand new version of the whistleblower complaint form, which was not made public until after the transcript of Trump’s July 25 phone call with the Ukrainian president Volodymyr Zelensky and the complaint addressed to Congress were made public, eliminates the first-hand knowledge requirement and allows employees to file whistleblower complaints even if they have zero direct knowledge of underlying evidence and only “heard about [wrongdoing] from others.”

If that document had not been altered, the anonymous whistleblower would have never been able to submit his complaint in the first place.

And as I have already discussed, even if every single thing that is being alleged is true, there is simply no impeachable offense here.

But lawlessness is running rampant in Washington at this point, and it appears that a well-orchestrated plot to take Trump down is unfolding right in front of our eyes

Michael Snyder is a nationally-syndicated writer, media personality and political activist. He is the author of four books including Get Prepared Now, The Beginning Of The End and Living A Life That Really Matters. His articles are originally published on The Economic Collapse Blog, End Of The American Dream and The Most Important News.