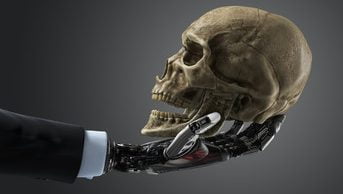 Technology has advanced to the point that many Americans have artificial intelligence devices in their homes. But what the majority of the sleeping masses don’t realize, is that AI is watching us and judging us.

This should concern everyone because it isn’t just tyrannies like China that are employing AI as a way to control and further enslave the population.  The United States government is doing it also – and for the same reasons – complete domination over everyone.

Artificial intelligence has tremendous power to enhance spying, and both authoritarian governments and democracies are adopting the technology as a tool of political and social control.

The potential of AI surveillance is the subject of the third installment of the Sleepwalkers podcast. The episode examines how AI consolidates power and control and asks if we can limit this troubling trend.

Data collected from apps and websites already help optimize ads and social feeds. The same data can also reveal someone’s personal life and political leanings to the authorities. The trend is advancing thanks to smartphones, smart cameras, and more advanced AI. -Wired

In fact, a 2017 algorithm developed at Stanford claimed to be able to tell if a person was gay. Even if it’s inaccurate, it will eventually be used by governments as a tool of persecution. Imagine being told AI could tell you political affiliation and whether or not you approve of the current or future regime. The outcome would be complete authoritarianism and enslavement regardless of which government chooses to use it.  And we are NOT safe from it here in the U.S. Sadly, most Americans are embracing AI with open arms.

“Take this type of technology, feed it to a citywide CCTV surveillance system, and go to a place like Saudi Arabia where being gay is considered a crime,” says Lisa Talia Moretti, a digital sociologist. “Suddenly you’re pulling people off the street and arresting them because you’re gay because the computer said so.”

China has also embraced facial recognition and AI surveillance. The AI industry there has flourished thanks to fierce competition and unrivaled access to personal data. The rise of AI is enabling tighter government control of information, speech, and freedoms. The U.S. isn’t far behind. In some Chinese cities, facial recognition is used to catch criminals in surveillance footage, and to publicly shame those who commit minor offenses. Most troubling, AI is being used in Xinjiang, a province in Western China, to persecute Muslims. China is now exporting the technology, along with the principles of techno-repression, to countries including Pakistan, Cambodia, and Laos, through its Belt and Road Initiative.

Even if China’s AI capabilities are exaggerated, the AI boom there is having a chilling effect on personal freedom, says Ian Bremmer, an expert on global political risk and founder of the Eurasia Group. “You just need a government that is starting to get that capacity and make it known, and have a few people that are sort of strung up as examples, and suddenly everyone is scared,” he says. -Wired

Law enforcement in the U.S. is embracing AI. The podcast concludes with the New York Police Department testing technologies including facial recognition. Although AI promises to make the department more effective and even more accountable, whether we accept this troubling trend may determine whether the West sleepwalks towards its own form of technological tyranny, reported Wired. “In America, the liberty we take for granted is hard-won and fragile,” says Oz Woloshyn, the host of Sleepwalkers. “So much hangs in the balance, and the decisions we take will affect our lives profoundly, and echo through the lives of our children.”