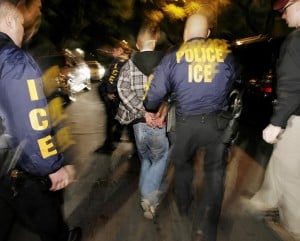 Arizona’s new immigration bill will require police officers to perform identification checks whenever they believe there to be a probable cause, or reasonable suspicion, that the person in question may have entered into the state illegally, namely through the Mexican border.

Though the bill does not specifically single out Latinos, it is clear that they will be disproportionately targeted by the new laws. Now that Arizona has paved the way, will the anti-immigration movement reignite?

First Lady Michelle Obama in Mexico last week said thatÂ changes to the immigration system are necessary. Rather than focusing onÂ border security, however, Mrs. ObamaÂ hinted that the system changes in question will deal with how to handle immigrant already in the United States.

“We’re seeing young children who are trying to cross the border just to reconnect with their parents, and their lives are in danger. They’re put in precarious situations. And a strong immigration reform policy would help alleviate some of those challenges.”

Washington’s immigration “reform” policies, like gun reform and health care reform, will attempt to spin the issue for the sake of the children, rather than addressing the root of the problem, which is securing our Southern border. Had the parents of these children not crossed US borders illegally in the first place, their children would not be forced to try and reconnect with them.

Thus, for the time being, while border control is not a serious enough issue for Washington to tackle, border states like Arizona are left with few choices, most of which revolve around dealing with the symptoms of illegal immigration, rather than the causes.

Had the Federal government done one of its fewÂ constitutionally defined duties of securing our border and protecting the citizenry, Arizona would not have to implement measures that resemble those of a police state.Â Individuals in, even those of Latino heritage,Â see the problems that illegal immigration brings with it, especially in Texas, New Mexico, California and Arizona.

What harm is there to having your identification checkedÂ if you haven’t done anything wrong? If you happen to be in the State of Arizona, are pulled over, and don’t speak a lick of English, wouldn’t it be prudent for the officer to verify if you have not broken the law? Residents of every state must go through these types of checks, anytime they are stopped by police – a quick check to see if you have any warrants, or past violations that may require special attention. What the State of Arizona has said now, is that if you are suspected of being an illegal immigrant, for a variety of reasons, like the car you are driving doesn’t belong to you, you don’t have insurance, or you don’t speak english and happen to matchÂ a certain kind of ethnic profile, you are more likely to be in the State without permission than, say, a Caucasian female driving a mini-van.

The benefits of the new approach are clear.

But there is also a be-careful-what-you-wish-forÂ danger.

There is a strong argument against the new measures, and that is, “how can the law can be enforced while preserving the civil rights of Americans of Hispanic descent?”

Today it is Hispanics that are profiled. Tomorrow, it might be you.

How long before the Federal government, seeing the merits of the argument for identification checks, requires, for the sake of civil rights and political correctness, that all citizens show their identification and have an ID check performed. Will American citizens readily accept an assault on their personal liberty, just as Hispanic American citizens or legal residents will be required to do in Arizona?

In a recent interview, Senator Joe Lieberman said that he is worried about domestic terrorism. If this is really true, then our first order of business should be to secure the United States from foreign enemies and those breaking the law to enter our country, as opposed to focusing our government’s limited resources on US citizens via More Surveillance on Planes, Trains, and Buses.

The new law in Arizona is a common sense approach to the problem of illegal immigration and tackles theÂ issue head on. And, though it may open the door to more interference in our lives by way of a national identification card and traffic checkpoints, Arizona has been left with no other choice due to the failure of our Federal government to secure our borders from invasion, as it is obligated to do under Article IV of the United States Constitution.

There is a growing consensus that the most important strategy in the reform battle is the one dealing with outward facing security on our southern borders. There would be no illegal immigrant problems in Arizona or elsewhere if the border was not porous.