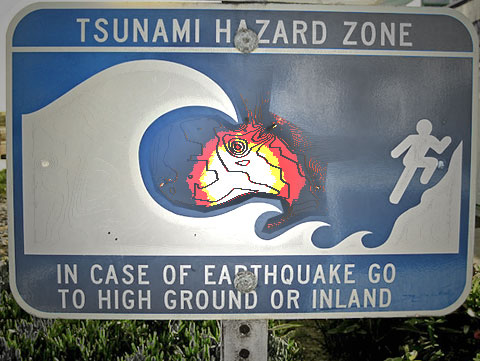 Last week, the coast of Chile was faced with a massive tsunami triggered by an 8.3 magnitude earthquake. Its capital and largest city, Santiago, was within the striking zone.

But an alert was issued, and over a million people evacuated within twenty minutes time. A reported twelve people were killed by the destruction of the waves, but, statistically it was much better than last time when over 500 people were killed.

It was a case of lessons learned. Inadequately prepared and corrupt government officials were dealt with, and new warnings systems were put in place to prep for the potential for violent episodes of seismic activity that so frequently take hold in the Pacific Ring of Fire, and signal if trouble is coming in time to escape.

But what would happen if a tsunami struck north in the Pacific, on the Californian coastline, and threatened to destroy Los Angeles or San Francisco?

“If the Chileans can evacuate a million people in 15 or 20 minutes, we should be able to do it as well.” [said Costas Synolakis, director of the University of Southern California’s Tsunami Research Center]

But there is no guarantee that Americans are as prepared as people in Chile. (source)

It is a stark warning, according to many experts, because adequate plans have not been made for evacuation, making buildings earthquake proof, or dealing with organizational strategies to mitigate the effects of disaster. NBC raised the question:

Is Los Angeles ready for a massive tsunami? How about Honolulu or Seattle?

“It’s a wake up call,” says Lucy Jones of CalTech.

“We know the buildings that are going to kill people – they’re still there. We know the infrastructure that’s going to come apart; and nothing is being done to strengthen it,” Jones told NBC.

“There’s enough of a chance,” another expert stated.

A tsunami set off by a major Alaskan earthquake is thought to be the most likely threat to the Californian coast, though many believe California is also overdue for a massive earthquake while a coastal quake and subsequent tsunami are also possible.

Like other cities along the Pacific coastline, it lies in the “Ring of Fire,” and is highly prone to seismic upsets, sooner or later. In the event of a tsunami, the force of the waves would rock northernmost cities first, but would progressively head south over just a couple hours time, capable of causing billions of dollars of property damage, and the relocation of millions of endangered people – with hopefully no loss of life, but little time for delay.

An estimated three quarters of a million people would need to be evacuated from Los Angeles alone, with comparable numbers in other large metro areas, according to experts. Even a relatively mild event could be sobering.

California hasn’t dealt with a serious tsunami wave or earthquake in the recent and short memory of the public, and hence the general population remains clueless on what to do. Most will follow instinct and head for higher ground or flee the city, but are the highways and routes capable of facilitating a quick exodus from the most danger prone areas?

It remains to be seen, but exposure to the San Andreas fault line puts the entire state at risk.

According to seismologists, a major earthquake along this fault line could cause hundreds of billions of dollars of damage…
[…]
For years, we have watched as the rest of the Ring of Fire has been absolutely ravaged by major seismic events.

We all remember the earthquakes that caused the Indonesian tsunami of 2004 and the Japanese tsunami of 2011. And the world mourned when major earthquakes devastated New Zealand, Chile, Peru, Japan and the Philippines.

Scientists assured us that it was only a matter of time before the west coast started to become seismically active again, and now it is happening.

If you live on the west coast, I hope that you will consider these things very carefully.

Just because the earth under your feet has been relatively quiet for a very long time does not mean that it will always be that way.

Something big appears to be happening to the earth’s crust, and you won’t want to be in the “danger zone” when things finally break loose.

As usual, it pays off to be prepared for any eventuality, and that means extra considerations for the coastline where seismic activity is possible at any time.

Consider your plan, and make sure to take these basic steps first: The Prepper’s Blueprint: The Step-By-Step Guide To Help You Through Any Disaster

Things To Consider Before Bugging Out