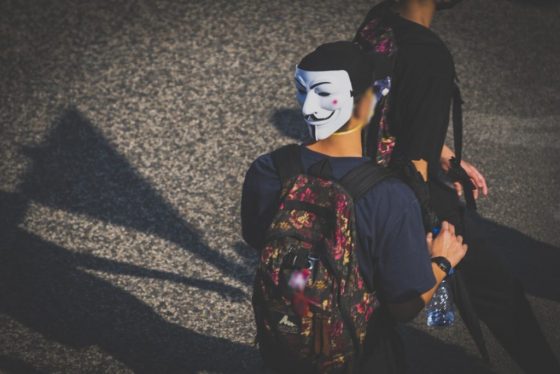 Hong Kong citizens denying tyranny against their own government and the Chinese government are striking back against a ban on covering their faces. Defying the law, protesters wore Joker, Winne The Pooh, and Guy Fawkes masks while holding hands in human chains to send a message.

In early October, one of the leaders of the Hong Kong resistance, Jimmy Sham, was assaulted by an organized group of four to five people wielding hammers, according to Civil Human Rights Front, the organization he heads, SCMP reported. This isn’t the first time that Sham and others have been attacked by mercenaries seeming to act at the behest of China. In September of this year, a 15-year-old boy and a 44-year-old man were arrested over assault with a baseball bat and a rod against Sham and his assistant, Law Kwok-wai.

Many others have had the same attacks happen to them by what has been deemed “triads” within China going back as recently as July. In a recent article, Channel News Asia writes, “Since late August, eight well-known dissidents have been beaten by unknown assailants as fear swirls that some “triad” crime networks have flocked to Beijing’s cause after five months of protests. The victims include rally organizers, opposition lawmakers, student leaders and people standing for upcoming polls.”

The Guardian also reported the following incident during that month showing protesters get beat in a subway by suspected hired hands of China or Hong Kong to intimidate them.

Triads are otherwise known as the Chinese mafia, and there are at least half a dozen main groups in Hong Kong with, according to the South China Morning Post newspaper, some 100,000 members. The three best-known groups — 14K, Sun Yee On, and Wo Shing Wo — also operate just across the border in southern China and as far afield as the U.S., according to the Washington Post. The newspaper further notes that attacks by Triads go back to at least 2014, “when thousands of student-led pro-democracy protesters occupied Hong Kong’s major retail and business districts, there were arrests after triads beat up demonstrators.” Actions which even the likes of mainstream media like the New York Times reported as early as July of this year.

But the Triads aren’t the only ones attacking protesters, it is also the legal militarized arm of Hong Kong and China, the police, as The Guardian has reported.

Months of increasingly violent pro-democracy demonstrations in Hong Kong were sparked by protests against an extradition law which would have allowed suspects in Hong Kong to be sent to various destinations, including authoritarian mainland Communist China.

Yahoo News reports the case of Chan Tong-kai, 20, who was wanted in Taiwan for the 2018 murder of his pregnant girlfriend, Poon Hiu-wing, as one of the catalysts that started the protests, which was an attempt to change the law.

This proposal that spurred outrage was scrapped last week; however, activists continue flooding Hong Kong’s streets and subways. Additionally, there are other things piled on that continue to enable the protests like the killings and police brutality against civilians protesting. One officer has even been caught brandishing a shotgun and aiming it at a crowd of protesters on video.

Just a few weeks ago another civilian was shot and killed by police. In this video you can see the officer being attacked by a student; the officer then decides to use lethal force, pulling out his revolver firing a shot into the 18-year-old’s chest. Couple this with the fact that in August a woman had her eye shot by police in an extremely graphic video, and you can see why the protests are still raging strong across Hong Kong. Although in a win for the Hong Kong protesters, a court has ordered that a woman identified only as ‘K’ can sue the Hong Kong police for their actions, SCMP reported.

However, make no mistake, violence is also happening on the side of Hong Kong protesters; this fight has been going on for almost half a year at a massive 118 days according to a Bloomberg report on October 4th. During August, a pro-Hong Kong police journalist from the Chinese mainland was beaten and tied up by rioters at Hong Kong International Airport. After the mob tied the journalist’s hands and feet, the man said: “I support the Hong Kong police, you can beat me!”

Police have also been accused of agent provocateur behavior by infiltrating protest groups and getting violent for no reason, or using lethal force when they could have just used nonlethal methods — but potentially still deadly — bean bag guns, rubber bullets or tear gas, edging on the violence as can be seen with these videos and more (here, and here) with the addition of the embedded clips below.

These actions and defying the masks ban spawned the display we saw last week and over the weekend with activists utilizing Winnie The Pooh, Joker and Guy Fawkes masks to cover their faces hiding their identities, Associated Press reported.

Another key issue is that some of the weapons being used by Hong Kong police including tear gas, pepper spray, and batons, are coming from U.S. companies producing the chemicals and ammunition. So far, two lawmakers in early August called for a ban on those weapons of war that are being used for crowd control, The Epoch Times reported.

Amnesty International has identified several U.S.-based companies that are supplying the crowd control equipment to police, according to a statement by the humans’ rights organization.

U.S. President Donald Trump promised Chinese President Xi Jinping in a June phone call that he would stay quiet on the protests in Hong Kong in exchange for progress in the trade war, Business Insider reported.

Although in September during a meeting at the UN after the trade deal seemed to fizzle out, Trump criticized China by stating that it must respect the city’s democracy and abide by the decades-old agreement giving it semi-autonomy, CBS reported.

However, recently President Donald Trump said in an Oval Office meeting with China’s Vice Premier, Liu He, that he thinks protests in Hong Kong are slowing down and they will take care of themselves, and that a partial trade accord the two leaders reached on Friday will be a “great deal” for the city’s residents.

“We discussed Hong Kong and I think great progress has been made by China in Hong Kong, and I’ve been watching and I actually told the vice-premier it really has toned down a lot from the initial days of a number of months ago when I saw a lot of people, and I see far fewer now,” Trump told reporters.

Trump added, “I think that’s going to take care of itself. I actually think this deal is a great deal for the people of Hong Kong to see what happened. I think this is a very positive thing for Hong Kong.”

In contrast, U.S. Vice President Mike Pence has accused China of curtailing “rights and liberties” in Hong Kong and blasted U.S. companies such as Nike and the National Basketball Association for falling in line with Beijing over free speech issues, Reuters reported.

Trump added, “I think that’s going to take care of itself. I actually think this deal is a great deal for the people of Hong Kong to see what happened. I think this is a very positive thing for Hong Kong.”

In contrast, U.S. Vice President Mike Pence has accused China of curtailing “rights and liberties” in Hong Kong and blasted U.S. companies such as Nike and the National Basketball Association for falling in line with Beijing over free speech issues, Reuters reported.

Many Hong Kong activists seem to agree that China has become a tyrannical nation-state in recent years; another man is heard echoing those words in a video uploaded to Twitter.

Wow. Listen to this Hong Kong protester talk about his desire for freedom. They are fighting for "survival" and trying to achieve what we have in America.

Perhaps the luxury of unprecedented freedom has made many in this country forget how fragile liberty truly is. pic.twitter.com/atZhGJDvNY

China has begun rolling out an Orwellian surveillance state with facial recognition cameras in bathrooms, on street corners, required to use the internet, for transportation and even in classrooms, as Activist Post has previously reported. If that’s not bad enough, China is planning to merge its 170+ million security cameras with artificial intelligence and facial recognition technology to create a mega-surveillance state. This compounds with China’s “social credit system” that ranks citizens based on their behavior, and rewards or punishes depending on those scores.

Hong Kongers have begun covering their faces due to the rise of facial recognition technology used by police, threats from police and Triads and security cameras on the streets themselves. Activists are often seen shining laser pointers to disrupt the facial recognition technology used by police. U.S. citizens haven’t quite gone that far, yet, but there is an interactive Fight For The Future map, which shows everyone how they can begin fighting back through legislation and contacting state senators, as well as organized efforts to fight the police state surveillance agenda, as Activist Post has reported.

Hong Kong protesters are planning a massive rally today that organizers are hoping will help them push their demands on Hong Kong and China. According to the Associated Press, police did not give authorization for the pro-democracy march and the protest would be considered “illegal.” Lam has enacted Martial Law using the colonial-era Emergency Powers act, and can make “any regulations whatsoever” during this time of “public danger,” NPR reported.

If protesters are caught disobeying the “no mask” law, they could be subjected to up to 1 year in prison for concealing their identity. The new law is designed to curb radical behavior, Hong Kong’s leader Carrie Lam has said.