American Politics Is Now Just Civil War by Other Means 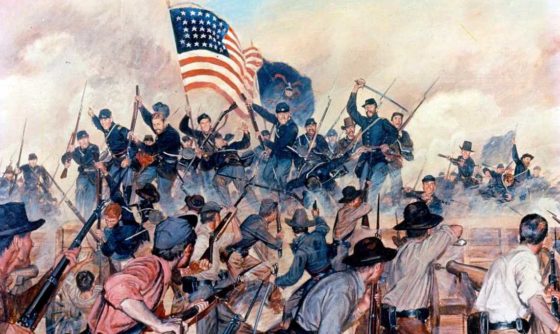 In the wake of the sending of bomb-like devices of uncertain capability to prominent critics of US President Donald Trump and of a mass shooting at a Pittsburgh synagogue (both Trump’s fault, of course) – plus a migrant invasion approaching the US through Mexico – there have been widespread calls for toning down harsh and “divisive” political rhetoric. Of course given the nature of the American media and other establishment voices, these demands predictably have been aimed almost entirely against Trump and his Deplorable supporters, almost never against the same establishment that unceasingly vilifies Trump and Middle American radicals as literally Hitler, all backed up by the evil White-Nationalist-in-Chief, Russian President Vladimir Putin.

Those appealing for more civility and a return to polite discourse can save their breath. It’s much, much too late for that.

When Trump calls the establishment media the enemies of the people, that’s because they – together with their passive NPC drones and active Antifa enforcers – are enemies, if by “the people” we mean the historic American nation. Trump’s sin is that he calls them out for what they are.

Trump didn’t cause today’s polarization, he only exacerbates it because he punches back. Good, may he continue to do so. Pining for a more well-mannered time in a country that belongs to another, long-gone era is futile.

American politics is no longer about a narrow range of governing styles or competing economic interests. It is tribal. Today’s “tribes” are defined in terms of affinity for or hostility to the founding American ethnos characterized by European, overwhelming British origin (a/k/a, “white”); Christian, mainly Protestant; and English-speaking, as augmented by members of other groups who have totally or partially assimilated to that ethnos or who at least identify with it (think of Mr. Hamadura in The Camp of the Saints).

(Unfortunately we don’t have a specific word for this core American ethnic identity to distinguish it from general references to the United States in a civic or geographic sense. (Russian, by contrast, makes a distinction between ethnic русский (russkiy) and civic/geographical российский (rossiiskiy).) Maybe we could adapt Frank Lloyd Wright’s “Usonian”? “Or Americaner,” comparable to Afrikaner? “Or Anglo-American”?)

Since the Left gave up on its original focus on industrial workers as the revolutionary class, the old bourgeois/proletarian dichotomy is out. Tribes now line up according to categories in a plural Cultural Marxist schematic of oppressor and victim pairings, with the latter claiming unlimited redress from the former. As the late Joe Sobran said, it takes a lot of clout to be a victim in America these days. The following is a helpful guide to who’s who under the new dispensation: 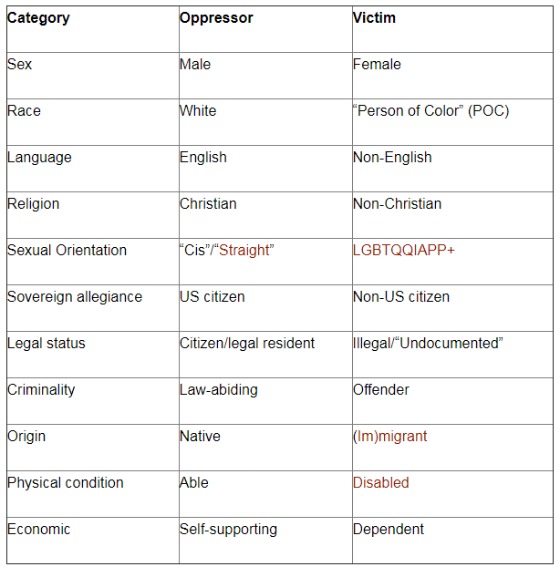 In most of the above categories there are variations that can increase the intensity of oppressor or victim status. For example, certified victimhood in a recognized category confers extra points, like Black Lives Matter for race (it is racist to suggest that “all lives matter”) or a defined religious group marginalized by “hate” (mainly anti-Jewish or anti-Muslim, but not something like anti-Buddhist, anti-Rastafarian, or even anti-atheist or anti-Satanist because no one bothers about them; anti-Christian victimhood is an oxymoron because “Christian” is inherently an oppressive category). In addition, meeting the criteria for more than one category confers enhanced victimhood under a principle called “intersectionality.”

In the same way, there are aggravating factors in oppressor categories, such as being a policeman (an enforcer of the structure of oppression regardless of the officer’s personal victim attributes, but worse if straight, white, Christian, etc.) or a member of a “hate” subculture (a Southerner who’s not vocally self-loathing is a presumed Klan sympathizer; thus, a diabetic, unemployed, opioid-addicted Georgia cracker is an oppressor as the beneficiary of his “white privilege” and “toxic masculinity,” notwithstanding his socio-economic and health status). Like being Southern, living while genetically Russian is also an aggravating factor.

Creatively shuffling these descriptors suggests an entertaining game like Mad Libs, or perhaps an endless series of jokes for which you could be fired if you told them at work:

Two people walk into a bar.

One is a Baptist, straight, male Virginia state trooper whose ancestors arrived at Jamestown.

The other is a one-legged, genderqueer, Somali Dervish WIC recipient illegally in the US on an expired student visa.

So the bartender says … [insert your own punch line here].

While Patrick Buchanan is right that the level of domestic violence today is not up to what the US experienced in 1968, the depth of the existential divide is much greater. This is why it’s perfectly acceptable for a homosexual, black MSM news anchor to describe “white men” collectively as a “terror threat,” but when a straight white, female counterpart makes a clumsy but mild observation about ethnic role-playing it’s a firing offense. (Note that while “female” is an assigned victim category, white females can be “gender traitors” if they are seen as putting their “racial privilege ahead of their second-class gender status”; to remain victims in good standing and an “allies” of higher-caste victim groups they need to learn to just “shut the f**k up” when POC sisters with superior oppressed status are holding forth.)

The victim side accuses its opponents of a litany of sins such as racism, sexism, homophobia, Islamophobia, etc., for which the solution is demographic and ideological replacement – even while denying that the replacement is going onor intended. This is no longer ordinary political competition but (in an inversion of von Clausewitz attributed to Michel Foucault) politics “as the continuation of war by other means.” In its immediate application this war is a second American civil war, but it can have immense consequences for war on the international stage as well.

To attain victory the forces of victimhood championed by the Democratic Party need to reclaim part of the apparatus of power they lost in Trump’s unexpected 2016 win. (Actually, much of the apparatus in the Executive Branch remains in Democratic hands but is only of limited utility as a “resistance” under the superficial Trumpian occupation.) As this commentary appears it is expected that on November 6 the GOP will retain control of the US Senate but the House of Representatives will flip to the Democrats.

That’s what’s “supposed” to happen, just as Hillary Clinton was “supposed” to win the White House two years ago. How things will actually play out though is anybody’s guess.

But for the sake of discussion, if the expected scenario comes to pass the last chance Trump’s election afforded to save what is left of the American nation is likely to come to an end. We can anticipate three results:

James George Jatras is an analyst and former U.S. diplomat and foreign policy adviser to the Senate GOP leadership.