It seems that it’s not just Americans who believe that body scanners violate a host of privacy and child pornography laws. The Fiqh Council of North America has issued a fatwa, or religious ruling, denouncing the use of body scanners because they would violate Islamic rules on modesty:

The Full Body Security Scanners (also called Nude-body scanners) are being installed at various airports in United States and Europe. Several human rights and religious groups have expressed their concerns and disapproval of such scanners on the grounds of violation of privacy and human dignity. The Fiqh Council of North America (FCNA) emphasizes that a general and public use of such scanners is against the teachings of Islam, natural law and all religions and cultures that stand for decency and modesty.

It is a violation of clear Islamic teachings that men or women be seen naked by other men and women. Islam highly emphasizes â€˜hayaâ€™ (modesty) and considers it part of faith. The Qurâ€™an has commanded the believers, both men and women, to cover their private parts. Human beings are urged to be modest in their dress. See Holy Quran, 7:26-27; 24:30-31; 33:59. Exception to this rule can be made in case of extreme necessity, such as medical treatment, to investigate a crime or in a situation of imminent danger. There must be a compelling case for the necessity and the exemption to this rule must be proportional to the demonstrated need.

FCNA fully supports the necessary measures for the safety and protection of all passengers. It is, however, deeply concerned about the use of nude body scanners for this purpose. 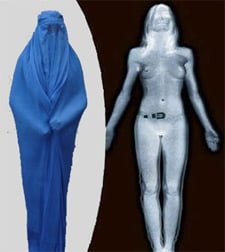 Inquiring minds want to know if the FCNA could potentially argue against the use of body scanners under the first amendment’s Establishment and Free Exercise clauses.

Religious law was most recently used as a defense by the Amish to gain an exemption from socialized health care, so it would not be out of the question for the FCNA and other Islamic organizations to argue under the same principles.

Like the FCNA, we believe that body scanners violate privacy laws, especially in respect to children – and more than likely violate a host of Christian modesty teachings set forth in the bible.

Wouldn’t it be ironic if, on religious grounds, Muslims would be able to bypass the very security measures that were installed to prevent Muslim extremists from attacking airlines?