Alex Jones Slams Alec Baldwin: “You Coward… I Challenge Him $1 Million To Get In The Ring With Me… Bare Knuckle” 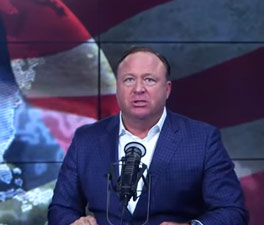 Alex Jones, founder of the popular alternative news web site Infowars.com, has challenged Trump impersonator Alec Baldwin to a fight. Baldwin took jabs at Jones in a recent Saturday Night Live appearance sarcastically questioning Jones’ legitimacy. In response, Jones recorded a spirited video in which he calls Baldwin a “coward” and tells him to step into the ring for a $1 million challenge:

Alex Baldwin thinks he’s a tough guy… I challenge him $1 million to the charity he wants to get in the ring with me… bare knuckle… you coward.. you think you’re a tough guy… you frickin’ bully… you coward.