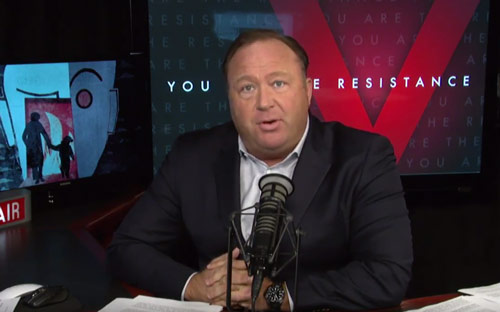 Alex Jones, the frontman for Info Wars confronted authoritarian racist millionaire and parasite, Bernie Sanders at LAX airport.  Jones was attempting to get Sanders to explain a racist comment he made during the last election cycle, but the Communist wouldn’t even answer.

“Well if it isn’t old Bernie Sanders,” Jones chided in a video uploaded to his website Info Wars on Monday. “Dude. No. Not right now,” one of the former presidential candidate’s aides responded, moving his body in front of Sanders like a human shield. As a member of the elite ruling class of authoritarians leftists love to worship, Sanders felt it was beneath him to actually converse with another human being, of course.

Jones simply wanted to get Sanders to acknowledge a highly racist comment he made while debating the corruptocrat, Hillary Clinton last election cycle. But since Sanders is too much of an elitist authoritarian chicken sh$t to answer, Jones settled for showing across the screen the many articles which detail the horrors of falling for “the greater good” argument all socialists love to toss around.

One such article was by SHTFPlan at 6:54 in the video, and it can be read here:

During the video Jones posted, he asked Sanders such questions as: “Mr. Sanders why do you think socialism works better than capitalism and why do you live in a capitalist country?” and “Do you enjoy living in million dollar vacation houses?”  Well, first of all, Jones is wrong that the United States is a capitalist country. It isn’t, and that’s not an opinion.  The US is actually an oligarchy and one run using crony corporatism policies.  It was actually the father of fascism  Giovanni Gentile who said: “Fascism should more properly be called corporatism because it is the merger of state and corporate power.” Of course, corporations only have power because the ruling oligarchs decided they needed the money involved, hence the merger.

But that’s not any better or worse than what Sanders, the millionaire with three houses supports anyway.  Any government is simply a select few who were given the pass by the public to attack, steal, and even kill those who violate the rules they make up.  It’s all still authoritarian, but we thought we’d quickly correct Mr.  Jones, lest people believe they actually have economic freedom (which is what capitalism is.) 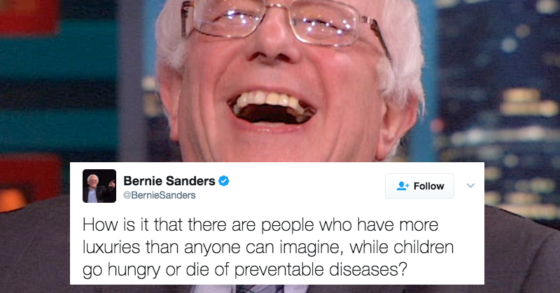 “You going to apologize to the Sandy Hook families?” quipped the Sanders aide in reference to the time Jones alleged the survivors of a school shooting were part of a government conspiracy. “Karl Rove didn’t run like this. He would at least have a conversation with me,” Jones told the camera in reference to the time he approached George W. Bush’s aide Karl Rove at the 2016 Republican National Convention.

It doesn’t appear that leftists like it when their slave master is ambushed at an airport.  Bernie Sanders, however, has never made a dollar of his own money.  Everything he has was stolen from the tax slaves making him a parasite.  This won’t matter to those who desperately want a master though and who demand others be violently harassed and dominated in order to pay for “the greater good,” but it’s important to show just how cowardly to ruling class can be.  They aren’t scary and as soon as we all band together and stop fighting about which tyrant is better, we could all maybe get some freedom peacefully.