ALERT: U.S. CDC Giving Itself Unconstitutional POWERS To Round Up And Detain Citizens En Masse Anytime, Anywhere And Throw Away The Key 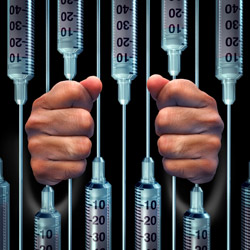 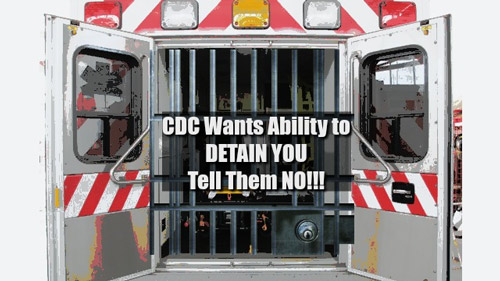 The U.S. Centers for Disease Control and Prevention literally has overstepped its authority in proposing to grant itself powers that obviously negate any rights U.S. citizens thought they had by issuing the Proposed Rule “Control of Communicable Diseases” on August 15, 2016 wherein CDC will self-invest itself with the power to apprehend healthy people en masse and detain them indefinitely with NO process of appeal!

That mammoth proposed rule is published in the Federal Register [Federal Register Number: 2016-18103] online at this website.  Before you read it, I suggest taking a very stiff shot of vodka or scotch, because you won’t believe what you read that is being proposed for what is supposed to be a non-communist country and its people, the USA!

This proposed CDC rule, in my opinion, is an “end run” or a “Hail Mary pass” around what’s become a nightmare situation in the USA regarding Big Pharma’s ‘sacred cows’—vaccines and vaccinations—which many more healthcare consumers are waking up to being what they actually are: neurotoxic injections damaging children, adults and pets!

In essence, the CDC is creating a police healthcare state, something that was tried in the 1980s when Representative Claude Pepper introduced three infamous bills that got me involved in organizing the country to defeat them, which we did, only now to be facing another round of excessive medical and federal agency over-reach, in my opinion.

What the CDC proposes defies the U.S. Constitution and states Constitutional rights with absolutely NO appeal process.  Where is the U.S. Congress, who has oversight of the CDC?  However, what should we expect from a do-nothing Congress?  Why doesn’t Congress investigate the CDC whistleblower William Thompson, PhD epidemiologist, confession of fraud, deceit and collusion he participated in?  Good question?

If this oppressive totalitarian-like proposed rule giving CDC police powers becomes law, kiss your kids goodbye; kiss what you thought you had in life goodbye—your body, which will not belong to you any longer but to the USA via CDC ‘edict’; and expect to be interred in U.S. FEMA camps—something the shadow government and others apparently have been planning for some time.

Just the other day I got notice of FEMA putting out a purchase order request for five million bottles of liter and half-liter size bottle water! What are they ‘expecting’?

What have all the United Nations vehicles moving around the USA been about? [1]   How about all the UN ‘mercenary-like’ troops ‘holed up’ in the USA [2]!  Are the U.S. military or national guard not sufficient, or won’t they do to American citizens what the controllers want them to do to us?  Has the USA relinquished its sovereignty to the United Nations without our knowledge?

Folks, wake up; it’s later than you think!

This proposed rule by the CDC is the ‘icing on the cake’ they apparently have planned, in my opinion, from all the ‘political correctness’ memes they have generated along with all the false flag ‘pandemics’ that really never panned out EXCEPT the apparent current one – Zika, which may become ‘successful’ because of the fearmongering built into it, including poison aerial sprays.

Now, in my opinion and from what I’ve researched, they’ve been able to genetically monkey around with both mosquitoes and a virus to make the ‘perfect storm’ health crisis and the need for a medical police state—all created on purpose, since many of the communicable diseases they are so damn scared of have been around for ages [and the human race survived them], plus I contracted most of them as a child—as did others—and we lived through them.  More importantly, our immune systems gained lifelong immunities.  That’s how the immune system is ‘exercised’ into becoming a well-functioning biological process, especially when healthful, natural nutrition – not GMO ‘phood’ – is provided.

Here are some quotes from the CDC proposed rule:

“When an apprehension occurs, the individual is not free to leave or discontinue his/her discussion with an HHS/CDC public health or quarantine officer.”

“…the proposed practice to issue Federal orders before a medical examination has taken place.”

“CDC defines precommunicable stage to mean the stage beginning upon an individual’s earliest opportunity for exposure to an infectious agent.”

And this apparent totalitarian ‘gem’ of an agency’s self-proclaimed ‘rite’:

“…(holding that a passenger consents to an airport security search by presenting himself/herself for boarding and that such consent may not be revoked by simply walking away).  Thus, in order to protect interstate travel from communicable disease threats, HHS/CDC intends for this section to apply broadly to all circumstances where individuals may queue with other travelers.”

[How about your being nabbed at a local Starbucks, McDonald’s, baseball-basketball-football game, or supermarket?  Folks, it’s getting to be more than Orwell ever could have imagined!  What are you going to do?]

And here’s what this, in my opinion, is all about:  Forced Vaccinations!  They have to be forcing these vaccines for some other reason than ‘immunity’ since the toxins in vaccines damage the immune system!

“CDC may enter into an agreement with an individual, upon such terms as the CDC considers to be reasonably necessary, indicating that the individual consents to any of the public health measures authorized under this part, including quarantine, isolation, conditional release, medical examination, hospitalization, vaccination, and treatment:provided that the individual’s consent shall not be considered as a prerequisite to any exercise of any authority under this part.”   [CJF emphasis added]

There you have it, folks!  Their ‘wet dream’ come true:  Taking away informed consent, one of the valid legal bugaboos regarding their illegal and unconstitutional enforcement of vaccinations to attend school or work!

They, for all intents and purposes, are trashing the U.S. Constitution and Bill of Rights!

And finally, for now, as this is really too much to absorb or take in, especially if you think you are a free citizen of the USA:

“…individuals who violate the terms of the agreement or the terms of the Federal order for quarantine, isolation, or conditional release (even if no agreement is in place between the individual and the government), he or she may be subject to criminal penalties.”

If you value your health, your life, your supposed freedom and that of your children, family and friends, don’t you think you ought to write your comments about the proposed CDC’s “Hitler-Stalin-Mao-like” authoritarian rule making “Rules for the Control of Communicable Diseases”?  Read it first; don’t take my words for granted, please.

Furthermore, more than anything, I’d like to know the names of the brains behind this totalitarian proposed rule.  I’d like to know which corporate interests had input and what they said.  I think if we are to have a transparent discussion about this proposed CDC rule, then citizens should know some of those details.  What do you think?

God BLESS America!   Is it too late yet?  Please get off your duffs and do something!

This article (ALERT U.S. CDC Giving Itself Unconstitutional POWERS to Round Up and Detain Citizens En Masse Anytime, Anywhere And Throw Away the Key ) can be republished with attribution to Catherine Frompovich, source article and Natural Blaze.com, keeping all links and bio intact.

Catherine J Frompovich (website) is a retired natural nutritionist who earned advanced degrees in Nutrition and Holistic Health Sciences, Certification in Orthomolecular Theory and Practice plus Paralegal Studies. Her work has been published in national and airline magazines since the early 1980s. Catherine authored numerous books on health issues along with co-authoring papers and monographs with physicians, nurses, and holistic healthcare professionals. She has been a consumer healthcare researcher 35 years and counting.

Her 2012 book A Cancer Answer, Holistic BREAST Cancer Management, A Guide to Effective & Non-Toxic Treatments, is available on Amazon.com and as a Kindle eBook.

Two of Catherine’s more recent books on Amazon.com are Our Chemical Lives And The Hijacking Of Our DNA, A Probe Into What’s Probably Making Us Sick(2009) and Lord, How Can I Make It Through Grieving My Loss, An Inspirational Guide Through the Grieving Process (2008)