A Visual History: How Much $1 Used To Get You (And How Much It Gets You Now) 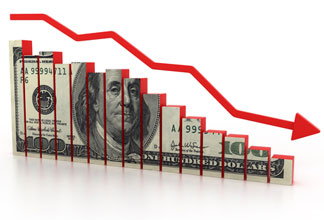 Ever since the creation of the Federal Reserve in 1913 Americans have seen the value of their currency dwindle.

We know the dollar has lost some 97% of its value since the Fed took over. But it’s hard to actually grasp this destruction of value without some examples.

The infographic below, originally posted at The Burning Platform, is self explanatory. We are being robbed bit by bit, on a daily basis, and there is no end in sight.

This is why you should be investing in hard assets like precious metals, food, and productive land now, before your savings are destroyed.

And now, more than ever before, Americans are at risk of losing everything. While Fed-manufactured inflation will continue to erode the value of our earnings, the near-term threat is one of hyperinflation. World leaders like Russia and China are rapidly working to decouple their economies from the dollar. One of these days they’ll pull the trigger and global confidence in the US dollar will be lost.  This will lead to an almost immediate collapse in the value of our currency, making the infographic above look like child’s play.

It’s coming one way or the other. The only question is will it be a slow degradation of our currency like we’ve seen over the last hundred years, or will it be a waterfall event that happens overnight?

We’re leaning towards the latter.

According to contraration economist John Williams, we are at a  point where the end-game can no longer be reversed. In an interview in June of 2013 Williams claimed that it is quite possible a domestic hyperinflationary environment will begin to evolve by the end of this year:

At the same time, rapidly deteriorating expectations for domestic political stability reflect widening government scandals, in addition to the dominant global-financial-market concern of there being no viable prospect of those controlling the U.S. government addressing the long-range sovereign-solvency issues of the United States government.

All these factors, in combination, show the end game to be nearing.

The most visible and vulnerable financial element to suffer early in this crisis likely will be the U.S. dollar in the currency markets.  Heavy dollar selling should evolve into massive dumping of the dollar and dollar-denominated paper assets.

Dollar-based commodity prices, such as oil, should soar, accelerating the pace of domestic inflation.

Get physical (assets). Do it now.