A Visit to an American Tent City

Reading the headlines over the last eighteen months one would think that the recession of 2008 is all but over. Unemployment, officially, is on the mend, with a reported 9.5% of Americans unable to find work (as opposed to official Great Depression numbers as high as 25%). Foreclosures seem to be stabilizing. Gross domestic product is in positive growth territory, signaling forward progress in the economy. Inflation, according to the latest Consumer Price Index statistics, is under control.

“The worst of the storm has passed,” declared President Obama in his 2010 State of the Union address. For all intents and purposes, any threat of a second great depression has been averted.

But what is depicted by our media and the official statistics put forth by government number crunchers, and what is happening on the ground on Main Street America, are two wholly different things.

Doug Walden, who lost his job during the onset of the recession, and now spends a good portion of his time helping others who are out of work or facing dire economic straits through his loosely-based organization called the Great Depression Enterprise Group explained it best when he described the desperate situation facing average Americans:

Here on Earth, outside the distorting intellectual gravitation field that is Washington DC, conditions are deteriorating for increasing numbers of Americas. The middle-class is being eroded from the bottom, as more people fall into poverty and outright destituion, and from the top, as more people find they cannot maintain their debt-financed psuedo-rich pre-2005 lifestyles.

Recently, Doug spent a day in one of the many “tent cities” popping up around America. These modern equivalents of the Hoovervilles of the 1930’s were believed to be relics of a different time – a time where there existed no social support structure or regulatory oversight of financial markets and banking institutions. After the Great Depression, the extreme poverty experienced by millions in post-1929 America was all but forgotten. For most in today’s generation, the thought of living without 21st century amenities like on-demand electricity, sewage, refrigeration, air conditioning, heat, and the other conveniences of suburban lifestyles does not even enter into the sphere of thought. It is a different time, and such a thing can’t happen today.

The reality, however, is in stark contrast to the dogma of a debt driven, consumer-based society.

Doug Walden has seen it with his own eyes. He’s spent time talking to those individuals who have lost everything and have nowhere else to go. Doug, in his own words, describes his experience below:

I met with Minister Brigham yesterday at his Homeless Tent City in a wooded area of Lakewood, New Jersey. (See attached pictures)

My initial, impression was one of shock and dread. Shock at seeing something I never thought I would see in America; Dread at the feeling in my gut that I was glimpsing my (an my loved ones) Future.

However, after meeting Minister Brigham and walking through the community, I feel oddly comfortable and guardedly optimistic. Minister Steve Brigham has been helping the homeless for 11 years and operating this camp for 4. It has grown significantly over the last 2 years.

Listening to Steve was like reading “The Long Emergency;” he gets re-scaling, localizing and living within rational environmental limits. He’s on the front-line of the collapse of Cheap-Energy American Society.

The camp is set back 200 feet into a wooded area. It consists of about 30 structures: a few school buses, lean-tos, tents and more elaborate structures (designed with great ingenuity), a common/community building. One circular home had a solar array to power LED lights. They have a generator for the “office”, bath/laundry facilities and common area. The bath/laundry building has a 45ft deep well, propane hotwater heater, sink & shower, and a washer and dryer.

There are about 45 residents. Most were working poor cast off in the Great Recession; but the newer residents come from the lower end of the middle-class. People who had homes, jobs and “secure” lives and now have nothing.

This is not a place I would choose to live, but, if necessary it is a place I could live. These people have faced a crisis most Americans have yet to experience and have come together, with the guidance and help of a kind smart man, and designed and established an effective way to Survive and Adapt to a sick dying economy. They are nice quiet people who, in spite of their old lives being destroyed, have retained their dignity and humanity.

It was an Oddly Uplifting Day.

Images from an American Tent City

As mentioned in his letter, Mr. Walden took numerous photographs while on site. He has been kind enough to share them with our readers.

A sign greets residents and visitors. It reads: “We are a community. Please respect the community…Yourself…And Others…Thank you!!!” 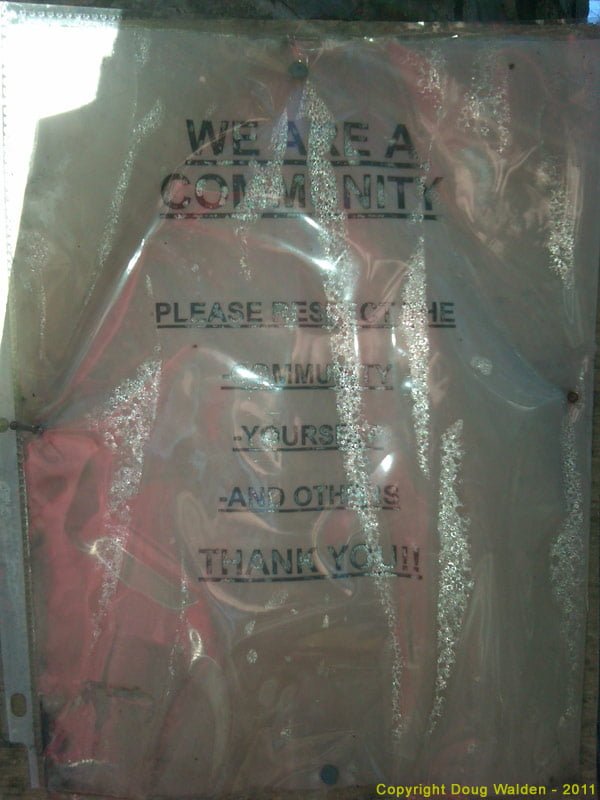 Shelters and community areas are distributed throughout the area: 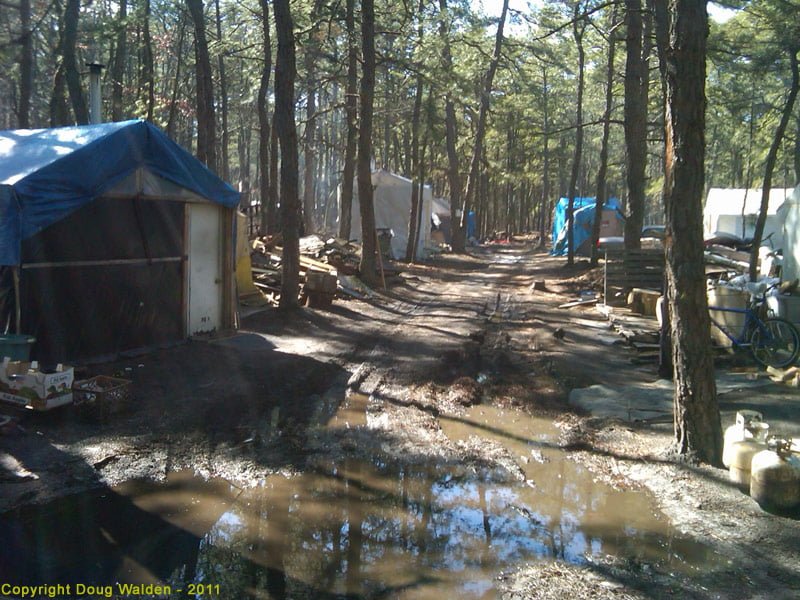 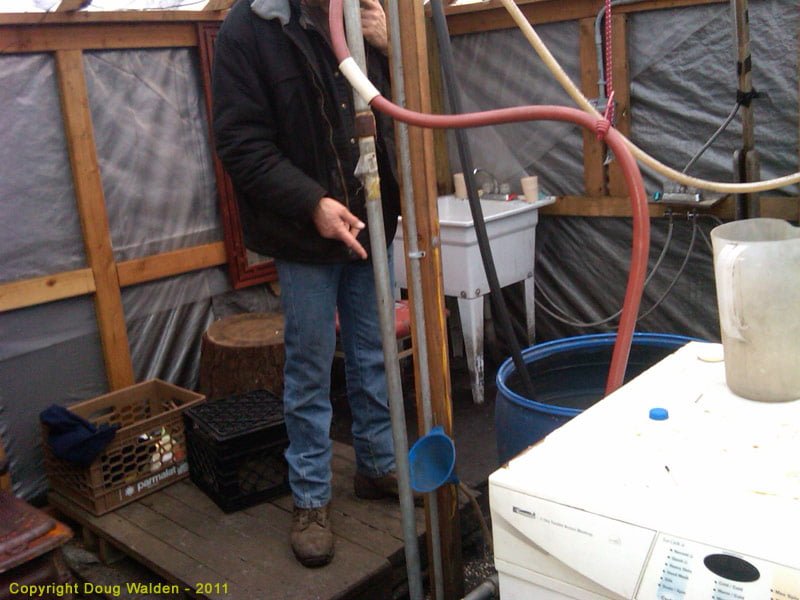 Wood is the primary heating fuel: 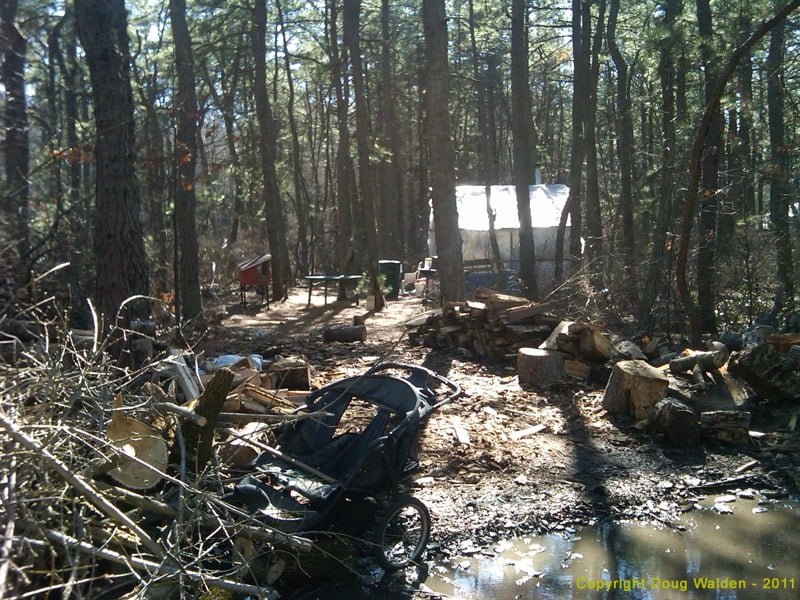 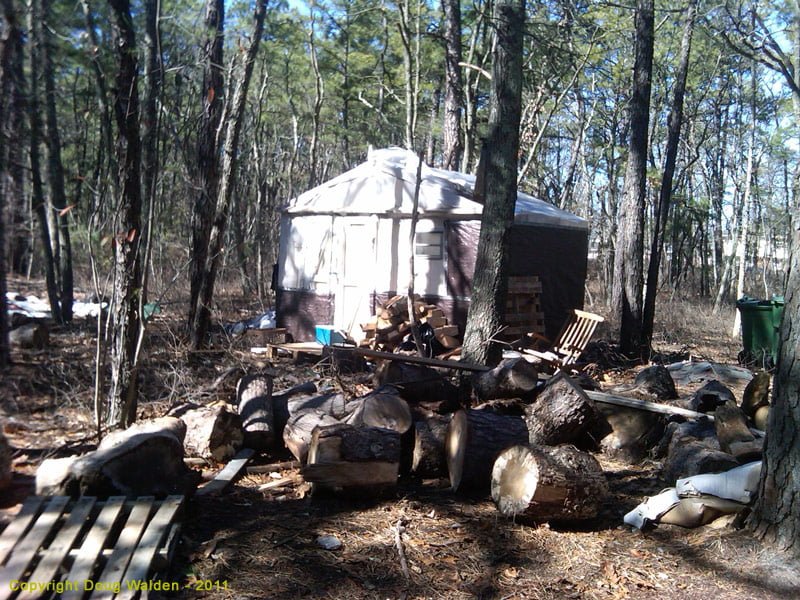 A variety of shelters built from available materials, with energy efficiency in mind: 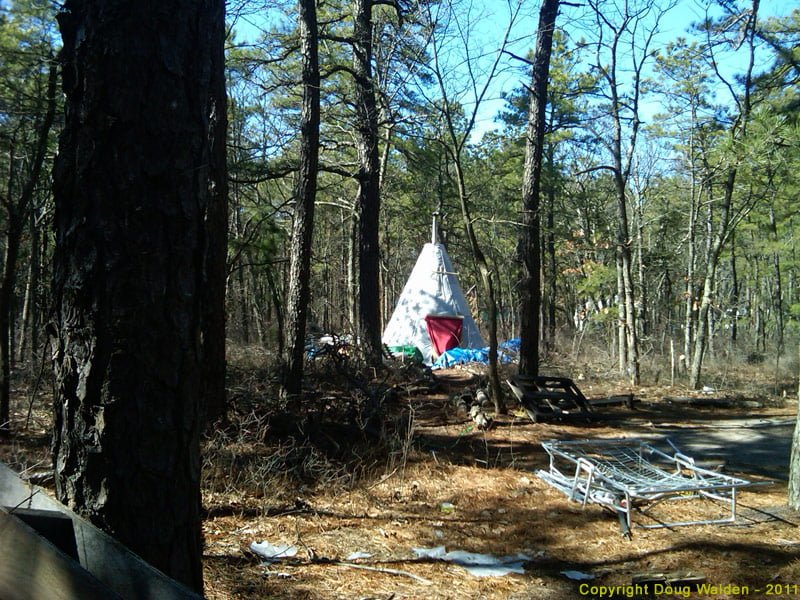 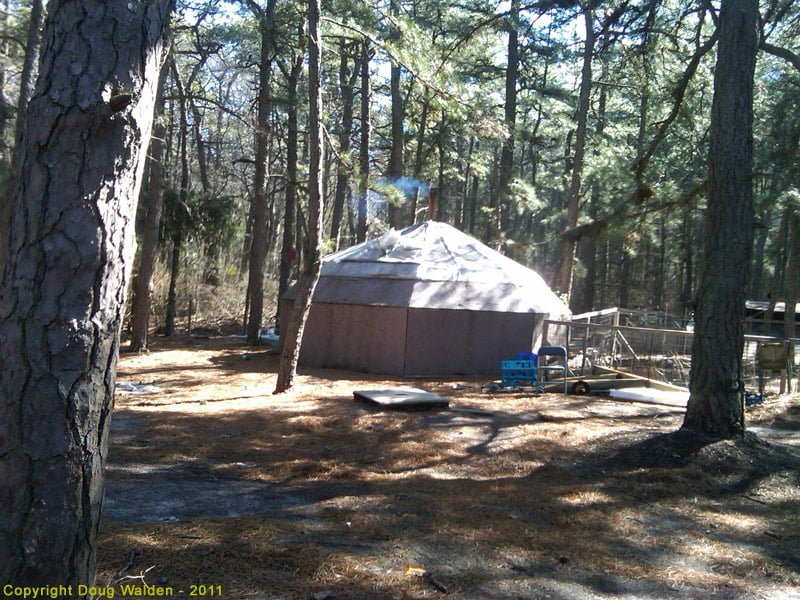 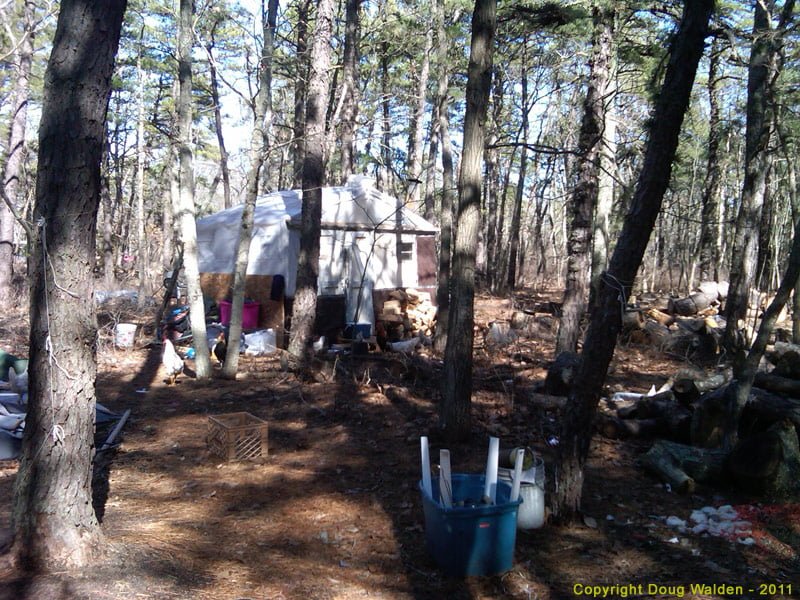 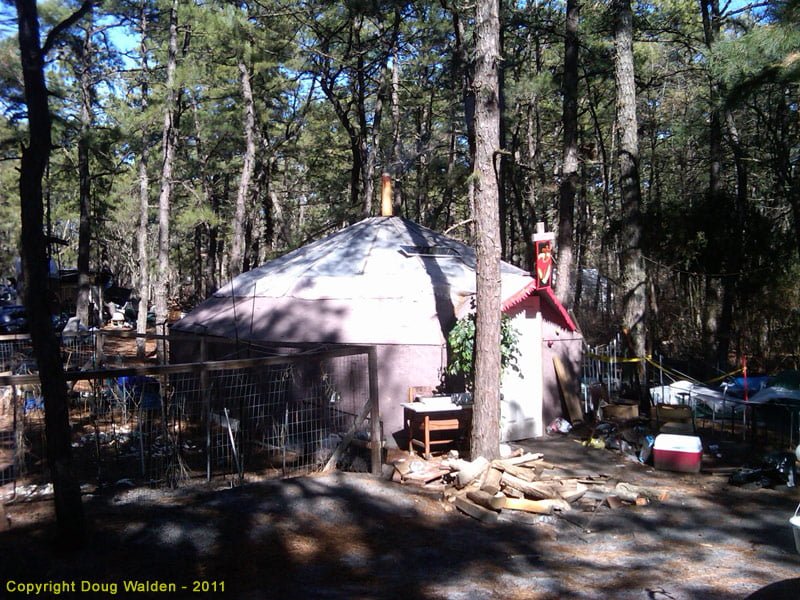 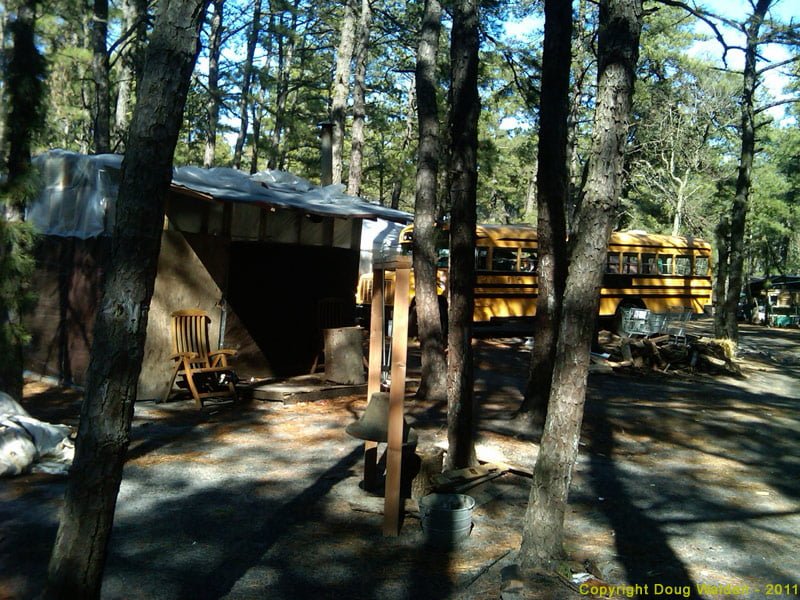 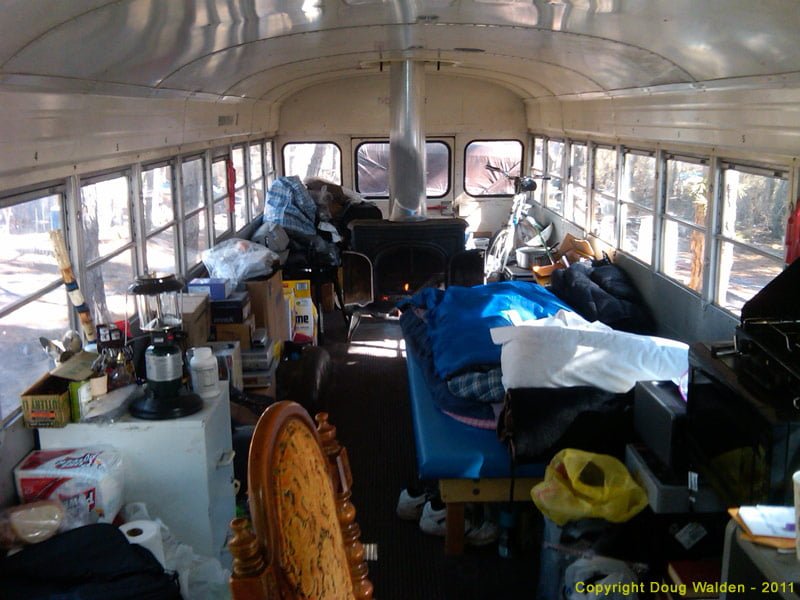 Preparing a garden for the growing season: 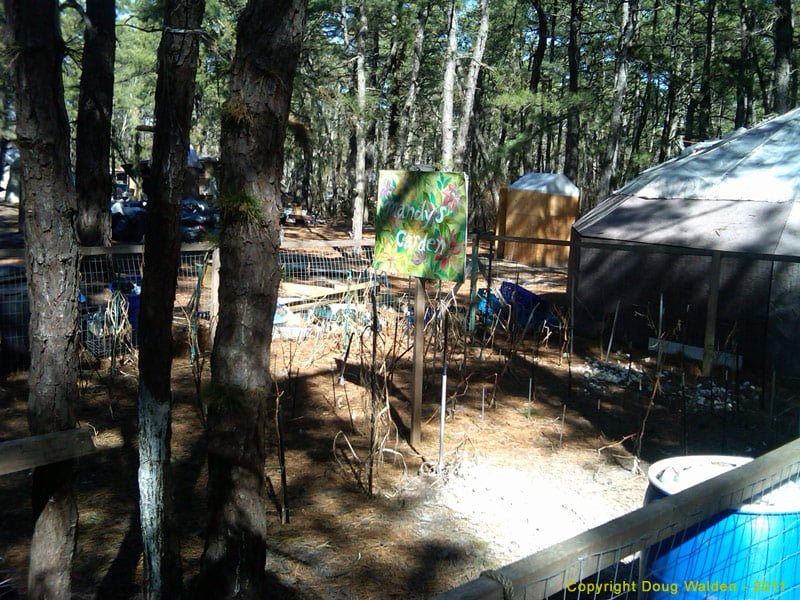 While Americans argue amongst themselves over wages, union bargaining rights, government spending, monetary easing, and a host of other issues, including who’s to blame for the country’s malaise, Minister Brigham and his community trudge on, despite what’s happening outside of their neighborhood microcosm. As millions struggle to hold on to the American Dream, the residents of this New Jersey “Tent City” have already experienced loss, and the emotional roller coaster that inevitably follows. They’ve gone through the first four stages of loss – denial, anger, bargaining, depression. In a situation where everything has been lost, and hope seemingly doesn’t exist, only the fifth stage, acceptance, becomes applicable. These individuals and families have accepted what has happened, and understand that they have a choice. Either give up and wallow in regret and blame. Or, empower oneself, and those around you, and move forward by whatever means are available.

Doug Walden is an advocate for those millions of Americans who are no longer being counted by the official statistics. Facing the real possibility of never finding meaningful labor due to a job market that has been completely gutted, Doug took it upon himself to not only provide assistance to those around him who needed help getting their bearings straight, but to learn from those who are finding ways to not only cope, but thrive during hard times.

For his part, Doug has yet to find employment in the traditional sense of the word. But this has proved to be just a minor obstacle in his push to mitigate personal economic collapse. In addition to working with friends, family and acquaintances in an effort to help those in his support group recover and move forward, Doug has started his own business, offering green energy residential services in a socially responsible and charitable manner, and is actively pursuing the creation of online support groups for those who have been adversely affected by our modern day depression.

Americans are rugged individuals – and when pushed into a corner we often find a way to push ourselves right out of it. This is what makes us exceptional. Going it alone is certainly admirable. But working within a support community of family, friends, and like-minded thinkers may prove to be a more expedient and efficient way for those in distress to achieve personal success. To contact Doug and discuss your personal situation, thoughts and ideas, you can email him at [email protected].