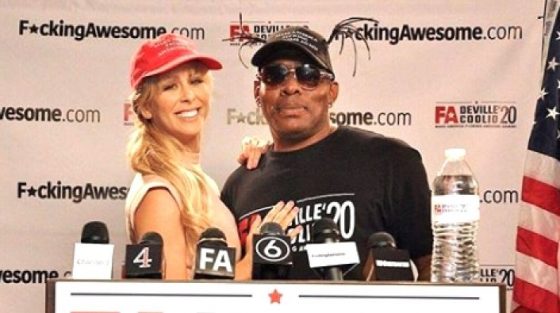 “But at the same time [I can] do what the American people really need,” she continues, which is “having a person with integrity, and having someone listen to the people, and actually care about America in public office.”

According to The Hill, DeVille (whose campaign slogan is “Make America F—— Awesome Again”) says a lot of people “giggle” when they learn that “Gangsta’s Paradise” rapper Coolio is running as her VP. “He’s lived and exemplifies what I consider the American dream,” DeVille says. While a rep for DeVille told ITK the Grammy winner wasn’t available for comment on the 2020 campaign, Coolio told Los Angeles’s KESQ-TV in a recent interview, “We need normal, regular, everyday people in office.”

While she hasn’t filed any intention to run documents with the Federal Election Commission (FEC), DeVille insists, “It’s evolved into a real and realistic run for president.”  Filing with the FEC sets up a fundraising vehicle for a campaign. It’s a necessary part of the process. And DeVille believes she has a shot at winning – and she just might.