A Full-blown Civil War Appears To Be Materializing: “Nobody Will Be Able To Retreat To A Neutral Corner” 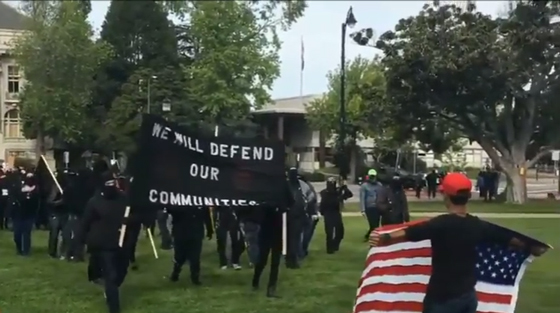 At the rate things are going, a full-blown civil war appears to be materializing.  Colin Kaepernick began it all with “taking a knee” in protest of the National Anthem.  Fast-forward one year later, and read this, released by Yahoo Sports for just how far it has gone:

“The Colin Kaepernick story has gotten seemingly endless attention because its reach goes far beyond football.

A pretty good reminder of that came Saturday afternoon in New York City, which is far removed from Kaepernick’s former NFL home of San Francisco. At a rally in Brooklyn, dozens of current and former New York police officers wore shirts that said “#WeStandWithKap” and at the end of the rally they took a knee and raised their fist, according to the New York Daily News.

Kaepernick became a household name when he took a knee for the national anthem last season to bring attention to racial injustice, including police brutality. It also appears to be one reason he has not been signed by any NFL team this offseason.

The police officers noted to the Daily News that they were speaking out against their belief that NFL teams aren’t signing Kaepernick as punishment for his protest.

“What Colin Kaepernick did is try to bring awareness that this nation unfortunately has ignored for far too long,” said NYPD Sgt. Edwin Raymond, an organizer of the rally, according to the Daily News. “And that’s the issue of racism in America and policing in America. We decided to gather here today because of the way he’s being railroaded for speaking the obvious truth.”

So, now the New York City Police Department weighs in on this.  They claim Kaepernick is being “railroaded,” eh?  Funny: He didn’t do it the year he went to the Super Bowl with the 49ers and a billion people were watching.  He didn’t stand for anything then, and he stands for nothing now.  That flag and that anthem represent something…and many died to keep the nation flying that flag and playing that anthem intact.  The sad irony of rights under the Constitution is that Kaepernick has the right to protest…a right that was enabled for him to exercise by his betters.  Look up the pictures of him and his buddies holding up automatic rifles, standing for nothing except themselves: perfect symbols of a decayed society and a dying empire.

The country is committing suicide as we speak.  The push for revision and redaction in all the history books has been on for some time.  Now we’re seeing actual mobs of demonstrators surrounding these historical statues.  The push is on.  On August 19, demonstrators in Detroit gathered to protest and demand removal of a statue of Christopher Columbus.  In all the major cities, the push to remove these statues along with protests continues.

It’s not going to stop here.  Now that Bannon is gone, a letter was sent to the President by more than a dozen conservative groups asking for him to not move toward a more moderate stance.  Indeed, over the weekend he “Tweeted” the Boston Police Department commending them on the way they handled the protests there.  The President has also adopted this “wishy-washy” stance of “we all need to heal the wounds” in the U.S., as if any of these protests had any relevance to any injustices happening today.

Seriously, this is all out of Alinsky’s “Rules for Radicals.”  Go back and review the Glenn Beck programs of 2012-2014…when he presented some very good information on the Weather Underground (particularly Bernardine Dohrn and Bill Ayers), as well as Cloward and Piven, and all the “outstanding” work by Van Jones to topple the system.  I’m not a personal fan of Beck’s, but back then he used to have very comprehensive layouts that were easily referenced and noted that concerned these Marxists and Communists marching under the banner and guise of “social justice.”  All that stuff that Van Jones had planned back then, with funding from Acorn and George Soros…it is manifesting itself here and now.

There is a civil war coming, as it is the domestic initiative that must be pursued to bring the United States down to the canvas…rendering her ineffective when the foreign initiative…an attack comes…to give the final count.  In both battles, nobody will be able to retreat to a neutral corner.  If the U.S. stays intact, then the NWO loses, and vice-versa.  These protestors (paid and genuine) are but a sampling of the platter to be served…a buffet right out of Pandora’s box.