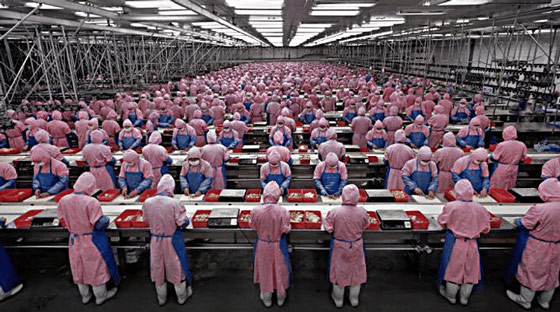 While we all loved President Trump’s campaign pledge to bring jobs back to America, there are powerful economic forces at work that suggest the shift to cheap labor is pretty much irreversible. Yes, Trump has spoken with the leaders of some of America’s biggest companies and he’s been successful at getting those chief executives to commit to creating or keeping a few thousands jobs here and there, but when you consider that the competing foreign labor force primarily responsible for manufacturing America’s consumer goods numbers in the hundreds of millions of people, the notion that we’re somehow going to see explosive manufacturing growth over the next four or eight years is nothing more than a pipe dream.

But don’t take it from us. A Chinese factory worker explains exactly why we have absolutely no way to compete with the near slave-like conditions found in foreign factories:

Zeng walked CNBC through his decision to spend six weeks in a factory working 12 hours shifts Monday through Saturday, mostly during the night, and what he discovered along the way.

“They just gave me the address of the factory and I just went. I just showed up. When I was there I saw people holding luggage waiting in a long line, so I just stood in the line,” Zeng told CNBC in an interview.

“When it was my turn they asked for my ID, asked to see my hand and asked me to recite the English alphabet. I got in after that. It took less than 30 seconds. You don’t have to apply or have any skills.“

“The first thing I can think of from a labor perspective is that the wages are unacceptable for American workers. So, in the factories, I was getting paid about 3100 yuan, or $450, per month. I don’t think American workers can accept those kind of wages based on living conditions and prices here,” Zeng said.

“Even if they relocate factories to the U.S. they’d replace workers with robots,” Zeng said. He said Pegatron already uses robots to apply cameras to iPhones, and to drop batteries into the devices. Robots, Zeng said, are more precise than human workers, and precision is particularly important for those two components.

If President Trump wants iPhones manufactured in the U.S., Apple will need to front the cost to pay the much higher wages required in the U.S., which means that consumers will have to be willing to pay more. Either that, or it will have to rely a lot more on machines, which won’t create jobs, and might end up taking them.

For those who are having trouble visualizing the cumulative effect of what Zeng describes, this chart pretty much sums it up and shows how much manufacturing jobs as a percentage of America’s total workforce have declined since the 1960’s: 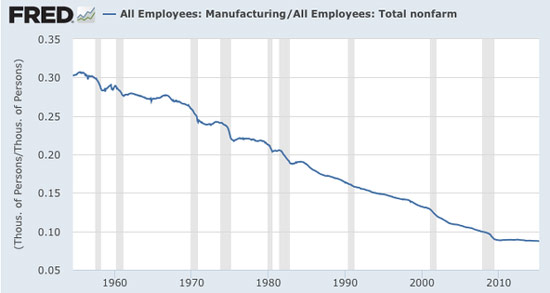 At first glance you may be thinking that we have no where else to go but up.

The problem, of course, is that if you do try to shift jobs back to America, and even if you triple the wages from what factory workers are making in China, those taking a monthly paycheck and benefits from the government already make more money for doing nothing than they would assembling mobile phone components for 12 hours a day.

One recipient of welfare summed it up succinctly in the following shocking interview:

While workers out there are preaching morality at people like me living on welfare, can you really blame us?

So can you really blame us?

There’s always hope, we suppose, that the millennial generation, currently demanding free college and living in their parents’ basements, will rocket America into its next great manufacturing boom.

But we’re not going to hold our breaths.

“Slacking Off”: Young Adults Living In Parents’ Basement Most Common For First Time Ever

Rise Of The Machines: Millions Of American Jobs Will Be Wiped Out In The Next Five Years