To be honest, we probably could have listed hundreds of different examples of government abuse. But we wanted to specifically focus on topics that we’ve covered over the last couple of years in relation to the Federal Governments attempts to Limit State Rights, Federalize local Police Forces, and most importantly how they are actively attempting to take away your freedoms and your liberty. Not many Americans have even heard of these organizations, yet they wield a huge amount of power and have managed to take over almost every level of local and state governments across this country. The National league of Cities represents over 19,000 cities, towns, and villages; they actively push their agenda – which matches up with this current administration’s policies – on a local and state level.

Supreme Court Says, YOU HAVE NO RIGHT TO YOUR DNA The Supreme Court is supposed to be our last line of defense against unconstitutional laws that limit our freedoms and liberty; unfortunately, over the last couple of decades this court has increasingly begun to rule in favor of the federal government and their large corporate partners.

The latest, in a long string of unconstitutional rulings, is probably one of the most shocking and far reaching rulings out if this court in quite some time.

According to this new ruling, you’re DNA can now be collected and stored in a DNA database, without a warrant or without even being found guilty of a crime. Those pulled over for even a minor traffic offense, are now subject to local and state law enforcement officials collecting and storing their DNA.

I bet you didn’t know that the Federal Government actually has a Green Police Force…. Across America the government is using the environment as an excuse to take peoples land, steal land for corporations, and imprison people for trying to live a self-sufficient lifestyle.

The American Dream: One of our most precious freedoms, the right to own land, is becoming  a nightmare. From the heartbreaking story of Andrew Wordes, who took his life after code enforcement teams seized his home, to the Off-Griders in California who are being illegally forced back on to the grid, our government is increasingly cracking down on your right to own and use your land in the way you see fit.

Mayors against Illegal Guns, sounds innocent doesn’t it? I mean who wants a bunch of dangerous criminals having access to illegal guns?

Well the problem with this organization, just like most of these radical left-wing gun groups, is their agenda has nothing to do with keeping guns out of the hands of criminals. Instead, this group of over 900 mayors – most of whom have very close ties to the Obama administration – are doing everything they can to make it impossible for law abiding citizens to own a firearm.

The other problem with groups like this is the insidious way they do business. While most people believe their state and local governments are passing these laws, they are oblivious to the fact that the ring leaders in the federal government are using groups like this to slowly but surely take your state rights.

The feds now use these types of groups to basically sidestep the constitution, and screw you at the local level where the courts are much less likely to step in.

The Federalization / Militarization of your local Police Departments 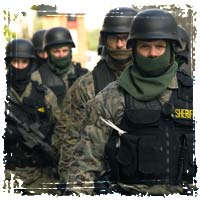 As we pointed out earlier in the week, the federal government has spent billions of dollars turning your local police departments into a de facto federal military force. Through the guise of “fighting terrorism” or “National Preparedness”, the Federal government (the Department Homeland Security) has essentially taken over your state and local law enforcement.

From equipping them with billions of dollars in military equipment, e.g. tanks, drones, and armor personal carriers, to actively training them in military tactics, the feds have essentially created a private military force that answers directly to the Department of Homeland Security.

Feds use Tragedy after Tragedy to Promote Anti-American Agenda

From using Sandy Hook to push their gun control agenda, to exploiting the Zimmerman case to “retrain police departments” across the country, this administration never misses a chance to exploit a tragedy for their own personal gain. In fact, they openly admit to using these tragedies to push their agenda.

Before current mayor of Chicago, Rahm Emanuel, left the Obama administration, he was quoted saying “you never let a serious crisis go to waste”… “It’s an opportunity to do things that you could not do before.”

Earlier this year, we reported on Missouri Lieutenant Governor Peter Kinder’s attempt to stop a program that was collecting data on gun owners and then sending that information directly to the Department of Homeland Security. How quickly most Americans forget; only a month ago we learned (not that we didn’t already know) that the federal government was actively spying on pretty much every American Citizen. From collecting phone records from all major cell carriers to spying on your audio and video chats, photographs, e-mails, documents, and internet connection logs, the government now knows more about you than you probably know about yourself.

The 4th amendment to the U.S. Constitution protects us from unreasonable searches and seizures, it reads:

The right of the people to be secure in their persons, houses, papers, and effects, against unreasonable searches and seizures, shall not be violated, and no Warrants shall issue, but upon probable cause, supported by Oath or affirmation, and particularly describing the place to be searched, and the persons or things to be seized.

Unfortunately, this government has deemed themselves to be above the law, and above the principles in which this country was founded. Even worse, is how little Americans seem to care!

While losing your 4th Amendment rights is an absolute travesty of justice, losing your 6th amendment rights, your Habeas Corpus rights and your ability to defend yourself in the court of law is almost unbelievable – unfortunately it has happened.

In all criminal prosecutions, the accused shall enjoy the right to a speedy and public trial, by an impartial jury of the State and district wherein the crime shall have been committed, which district shall have been previously ascertained by law, and to be informed of the nature and cause of the accusation; to be confronted with the witnesses against him; to have compulsory process for obtaining witnesses in his favor, and to have the Assistance of Counsel for his defense.

The Suspension Clause of the United States Constitution specifically included the English common law, Habeas corpus, procedure in Article One, Section 9, clause 2, which demands that “The privilege of the writ of habeas corpus shall not be suspended, unless when in cases of rebellion or invasion the public safety may require it.”

Last year people were up in arms over the Obama administrations passage of a provision in the NDAA, a provision that would allow them to indefinitely detain American Citizens without a trail, unfortunately Americans seem to have a short attention span and have already forgotten that the feds granted themselves these new unconstitutional powers.