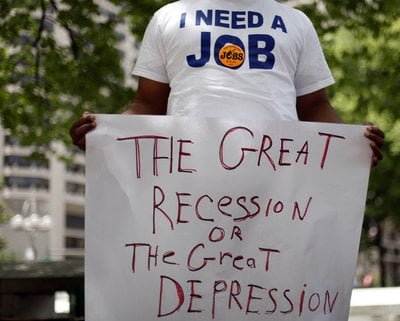 Frank Wallace, who is unemployed, displays a sign during a vigil
for the unemployed at the Arch Street Methodist Church in Philadelphia

With recovery in full swing and unemployment dropping to an Obama administration near record low of 8.2%, the US economy seems to be bouncing back stronger than ever. Unless, of course, you look at the numbers no one in mainstream media, the Bureau of Labor and Statistics, or the administration is talking about. As many of our readers already know, the official unemployment rates released monthly by the BLS (U-3, U-6) fail to account for one very key figure – those individuals who are no longer in the labor force.

The number of those folks – the ones that don’t matter anymore because counting them would hinder the President’s reelection bid – is absolutely staggering for what is supposed to be the engine of the global economy and the world’s only super power:

Were it not for people dropping out of the labor force, the unemployment rate would be well over 11%.

Over the past several years people have dropped out of the labor force at an astounding, almost unbelievable rate, holding the unemployment rate artificially low. Some of this was due to major revisions last month on account of the 2010 census finally factored in. However, most of it is simply economic weakness.

Those “Not in Labor Force” increased by 310,000. If you are not in the labor force, you are not counted as unemployed.

With some 248 million people over the age of 15, nearly one in three Americans in this country are not working.

While the participation rate includes people like those in retirement and stay-at-home moms (because they definitely haven’t worked a day in their lives, as was recently noted by democrat strategist Hilary Rosen) who have no intention of joining the traditional labor force, the last four years have seen an unprecedented drop in the rate of labor force participation as well as unemployment overall. Charlie McGrath of Wide Awake News explains:

The government… pretending everything is getting better because we spent trillions of dollars  bailing out firms we now call too-big-to-fail. But the fact of the matter is, in order to get this kind of 8.3% fictitious fantasy number they had to lower the participation rate.

In the last four years we’ve lost 10 million people out of the participation rate. Just to give you an idea of how many people that is, it would take the city of Dallas, Salt Lake, San Diego, Spokane, Roanoke and Cincinnati… the people living in those city limits. If you double that number that gives you the number of people that have left the participation rate that are no longer in the working pool.

Yet, that isn’t stopping the mainstream media from reporting that things are getting better. We’ve spent this nation into absolute financial servitude.

Understand that when you turn on the mainstream media you are being fed propaganda.

The Obama administration is pulling out all the stops. If the real story came out – that the true unemployment rate in this country (those out of work plus those who the government deems as no longer participating) is almost triple that of the official BLS U-3 rate of 8.2% – confidence in the financial markets and the government’s ability to mitigate the crisis would be lost almost immediately. So, too, would Obama’s hope for another four years of fundamentally changing America.

But just because the President and his media conglomerates are preaching of recovery doesn’t mean that everyone believes it. A large portion of Americans, especially those millions of people without jobs, are not going to be swayed by the mainstream propaganda. They are living in a modern day depression right here and now, and they, too, will be headed to the polls in November. And, as Jim Clifton, CEO of Gallup, recently pointed out to RT, they don’t care about anything else except for their personal economic and financial circumstances:

RT: What are the dynamics in terms of opinion polls as far as the economy goes, among the American people, the way it was four years ago and the way it is now?

RT: Enough to win President Obama the next election?

JC: I don’t think quite yet… According to the Gallup poll, if we vote tonight, Romney will beat him… They are not voting for Romney – they just vote against the president.

RT: What are the main reasons not to vote for the president?

JC: Strictly unemployment. Just one reason. Foreign policy plays no role at all right now. If something really big happens… that will only make a little bit of a difference. Americans don’t want to hear about foreign policy. They should, but they don’t. Gallup shows real unemployment is close to 20 per cent in America. Not 8.5 but 20 per cent. 30 million people are out of work. 60 per cent of them told Gallup they have no hope of getting a job. That is 18 million.

RT: Do Americans blame the president for that?

JC: There are two questions here. Do I think they should? No. Do they? Yes.

President Obama most certainly inherited this crisis from his predecessor(s), but he’s taken no steps to change anything for the better. The hope many had that life would improve under policies designed to redistribute wealth to the masses by taking from those with the ability and giving to those with the need is rapidly diminishing. The trillions of dollars backed by human collateral that has been thrown at the crisis has done nothing to fix the underlying issues that caused it in the first place. All of the problems we faced in 2007/2008 are still here, and they are only going to get worse.

If you think 88 million not participating and 20%+ unemployment is bad, give it another four years.

Right now the safety nets are in place to help most of those who can’t find work – at least for 99 weeks until they are no longer counted as unemployed. But those safety nets, including medical care and food assistance, can only take so much before they snap. That moment is rapidly approaching.