Unfortunately, it was only a matter of time. Earthquake watchers have been observing the build up of pressure and worrying about the likelihood of destructive mega-events at hot spots all around the world.

But now, a 6.2 earthquake has destroyed the lives of many people in small towns in central Italy, while it shook the capital in Rome.

At least 120 people are dead, and rescue workers are still searching for survivors and totaling the massive destruction.

A powerful 6.2-magnitude earthquake followed by a series of aftershocks has rocked central Italy. Strong tremors were felt in the country’s capital, Rome, and several small towns and villages have been seriously damaged with over a hundred killed and hundreds injured.

Prime Minister Matteo Renzi said on Wednesday evening that at least 120 people are dead as a result.

The quake hit at 01:36 GMT with an epicenter 76 kilometers southeast of the city of Perugia, the US Geological Survey reported.

The worst hit was the small town of Armatrice, with some 2,700 residents, which witnesses have described with this terrifying phrase: ‘Town doesn’t exist anymore’

As RT reported, several people are trapped under the rubble, and it is not yet clear how many of those have survived:

Caterpillar Radio2 reported “many collapses” in the town of Amatrice in the Rieti province.

“I’m trying to contact the services. The town doesn’t exist anymore,” he added.

Although, there is no information on the casualties yet, several people are trapped under the rubble, the mayor confirmed, La Republica reported.

“There’s been a landslide and a bridge might collapse,” the mayor told RAI.

The scale of devastation is massive, and yet scientists are expecting many earthquakes of even bigger magnitude that could absolute wreck any number of given spots around the globe, with little warning.

While Italy attempts to get back on its feet, experts fear that the “big one” could be coming to many other potentially volatile locations – and several of the most dangerous spots are in the United States, especially Southern California.

Major earthquakes, tsunamis and resumed volcanic activity seem to stir up multiple areas of heated activity. Eventually, Mother Nature must unleash that pressure, so in many respects it is only a matter of time.

Italy has always been in a precarious zone for earthquakes and volcanoes because it sits between the Eurasian and African plates, and is subject to a huge amount of tectonic pressure. Thus, it has been subjected to the majority of earthquakes in Europe, as this map demonstrates:

That fact is etched in the minds of all who remember the notorious destruction of Pompeii, which was completely overcome by the volcanic eruption of Mount Vesuvius back in 79 A.D.

Unfortunately, the lives lost cannot be recovered, but there are some important basic steps your family can take to prepare to evacuate and hopefully avoid the path of destruction.

This map shows the most dangerous areas in the United States, where people should make serious preparations to avoid the worst. 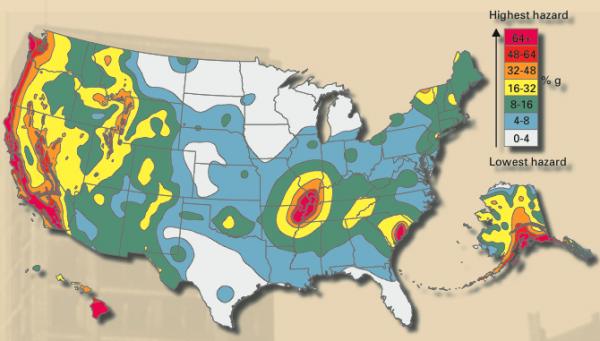 Here are some tips from Ready Nutrition on Prepping Before an Earthquake Happens:

If you live in an earthquake-prone area, there are many things you can do … Preparing survival tools, emergency food and water, communication devices, first aid and pre-determined safety zones where family members can meet will help everyone to remain safe and calm.

These important safety tips can help you to quickly get to the best safety zone no matter where you are.

If you’re inside:
DROP to the ground; take COVER by getting under a sturdy table or other piece of furniture; and HOLD ON until the shaking stops. If there isn’t a table or desk near you, cover your face and head with your arms and crouch in an inside corner of the building.
Stay away from glass, windows, outside doors and walls, and anything that could fall, such as lighting fixtures or furniture.
Stay in bed if you are there when the earthquake strikes. Hold on and protect your head with a pillow, unless you are under a heavy light fixture that could fall. In that case, move to the nearest safe place.
Use a doorway for shelter only if it is in close proximity to you and if you know it is a strongly supported, load bearing doorway.
Stay inside until the shaking stops and it is safe to go outside. Research has shown that most injuries occur when people inside buildings attempt to move to a different location inside the building or try to leave.
Be aware that the electricity may go out or the sprinkler systems or fire alarms may turn on.
DO NOT use the elevators.

If you’re outside:
If you are outside when an earthquake occurs, try to remain out in the open, away from buildings, trees, telephone and electrical lines.  Elevated expressways and bridges should also be avoided.
Unless you are in immediate danger, stay where you are.
However, move away from buildings, streetlights, utility wires, bridges, or overpasses.
Once in the open, stay there until the shaking stops. The greatest danger exists directly outside buildings, at exits, and alongside exterior walls. Many of the 120 fatalities from the 1933 Long Beach earthquake occurred when people ran outside of buildings only to be killed by falling debris from collapsing walls.
If you’re in a moving vehicle:
Stop as quickly as safety permits and stay inside the vehicle. Avoid stopping near or under buildings, trees, overpasses, and utility wires.
Proceed cautiously once the earthquake has stopped. Avoid roads, bridges, or ramps that might have been damaged by the earthquake.

If you’re trapped under debris:
Do not light a match.
Do not move about or kick up dust.
Cover your mouth with a handkerchief or clothing to avoid inhaling dust
Tap on a pipe or wall so rescuers can locate you. Use a whistle if one is available. Shout only as a last resort. Shouting can cause you to inhale dangerous amounts of dust.
Protect your head as well as possible in the event that aftershocks cause the debris to shift.

Are You Ready Series: Earthquake Preparedness