5 Signs That Global Financial Markets Are Entering A Bear Market, And 11 Ways That You Can Get Prepared For The Chaos That Is Coming… 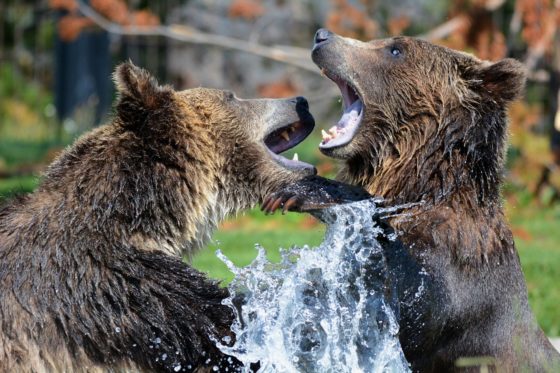 We haven’t seen carnage like this in the global financial marketplace in quite some time. On Wednesday, U.S. stocks were down some, but things were much, much worse around the rest of the world. Global banking stocks are plunging, emerging market stocks are cratering, and emerging market currencies continue their stunning decline. This represents a dramatic change from the relative stability that we have seen throughout most of 2018. It is almost as if someone flipped a switch once the month of August began, and the shakiness of global financial markets has many investors wondering what trouble fall will bring. What we are witnessing right now is not a full-blown panic yet, but it definitely has the potential to turn into one.

The term “bear market” is being thrown around a lot lately, but a lot of people don’t understand what a “bear market” actually is.

A bear market is generally considered to be when we see a decline of 20 percent or more from the 52-week high, and after the carnage of this past week a lot of those thresholds are now being crossed.

It would probably be too early to call this a “global stock market crash”, but we are well on the way to getting there.  The following are 5 signs that global financial markets are entering a bear market…

#1 Global stocks have now fallen beneath all key moving averages. Those key moving averages are important psychological thresholds for investors, and if we have a few more days like Wednesday we could see global financial markets go into full panic mode.

#2 European banking stocks have now officially entered a bear market, and all major European stock indexes are now red for the year.

#3 Global banking stocks are down a whopping 23 percent from the peak established earlier this year, and that means that they have officially entered a bear market.

#4 Emerging market stocks have fallen 20 percent from the peak, and that means that they are also now in a bear market.

If the financial carnage continues (and that is a big “if”), this could be the beginning of another financial crisis like we experienced in 2008, and that would almost certainly mean a crippling global recession.

And of course once the next global recession begins, it is likely to be more painful than we have ever seen before in modern history, because the global debt bubble is far larger than it has ever been before.

We live at a time of great global instability, and there are so many ominous warnings about our future. A lot of people reach out to me for advice on how to get prepared for what is coming, and I hope to share quite a few tips in future articles.

Today, I would like to share with you 11 tips that my good friend Ray Gano shared with his readers in his most recent article…

1 – Get Out of Debt: The old saying, “the borrower is the servant of the lender”, is so incredibly true. The key to insulating yourself from an economic meltdown is to become as independent as possible, and as long as you are in debt, you simply are not independent. You don’t want a horde of creditors chasing after you when things really start to get bad out there.

2 – Find New Sources of Income: With the birth of The IRA, there simply is no such thing as job security anymore. If you are dependent on a job (“just over broke”) for 100% of your income, you are in a very bad position.  There are thousands of different ways to make extra money. What you don’t want to do is to have all of your eggs in one basket. One day when the economy melts down and you are out of a job are you going to be destitute or are you going to be okay?

IF you need some ideas on what you can do, contact me and I can help.

3 – Reduce Your Expenses: Many Americans have left the rat race and have found ways to live on half or even on a quarter of what they were making previously. It is possible – if you are willing to reduce your expenses. In the future times are going to be tougher, so learn to start living with less today.

4 – Learn To Grow Your Own / Supplement Your Food: Today the vast majority of Americans are completely dependent on being able to run down to the supermarket or to the local Wal-Mart to buy food. But what happens when the U.S. dollar declines dramatically in value and it costs ten bucks to buy a loaf of bread? If you learn to grow your own food (even if is just a small garden) you will be insulating yourself against rising food prices. Another thing is to learn to hunt and fish. There is “low cost” food out there for the taking, you just need to assert yourself. (Low Cost = you still need to pay for hunting and fishing licenses.)

5 – Make Sure You Have A Reliable Water Supply: Water shortages are popping up all over the globe. Water is quickly becoming one of the “hottest” commodities out there. Even in the United States, water shortages have been making headline news recently. As we move into the future, it will be imperative for you and your family to have a reliable source of water. Some Americans have learned to collect rainwater and many others are using advanced technology such as atmospheric water generators to provide water for their families. But whatever you do, make sure that you are not caught without a decent source of water in the years ahead.

6 – Buy Land: This is a tough one, because prices are high depending on where you are looking. If you are able to buy land when prices are low, that is going to insulate you a great deal from the rising housing costs that will occur when the U.S dollar does totally go into the tank.

7 – Buy Precious Metals: this is a no brainer, but it still amazes me how many people are not doing this. Right now silver is sitting at $14.41. That is a very affordable price and a price that everyone can afford. We must start “paying ourselves first” and start pulling in these sort of assets.

The best place that I recommend is Renaissance Precious Metals. It is who I purchase from.

8 – Get Partially Off The Grid: An increasing number of Americans are going “off the grid”.  Essentially what that means is that they are attempting to operate independently of the utility companies. In particular, going “off the grid” will enable you to insulate yourself from the rapidly rising energy prices that we are going to see in the future. If you are able to produce energy for your own home, you won’t be freaking out like your neighbors are when electricity prices triple someday.

9 – Store Non-Perishable Supplies: Non-perishable supplies are one investment that is sure to go up in value.  Not that you would resell them. You store up non-perishable supplies because you are going to need them someday. So why not stock up on the things that you are going to need now before they double or triple in price in the future? Your money is not ever going to stretch any farther than it does right now.

10 – Develop Stronger Relationships: Americans have become very insular creatures. We act like we don’t need anyone or anything. But the truth is that as the we see a socio-economic melt down we are going to need each other. It is those that are developing strong relationships with family and friends right now that will be able to depend on them when times get hard.

11 – Get Educated And Stay Flexible: When times are stable, it is not that important to be informed because things pretty much stay the same. However, when things are rapidly changing it is imperative to get educated and to stay informed so that you will know what to do. The times ahead are going to require us all to be very flexible, and it is those who are willing to adapt that will do the best when things get tough.