Bitcoin is on a tear right now because major institutional investors are entering the sector. It’s not a bubble, but its price is nowhere near being considered a bargain. We remember when our newsletter discussed both Bitcoin and Ethereum. It was early in 2017 and Bitcoin was $400 to $500 and ETH was $12!

Back then, it was an opportunity of a lifetime, as it was after the 85% implosion that came. Right now, it could go much higher because the sentiment is mind-blowingly bullish.

While Bitcoin is experiencing record inflows, gold has been suffering from record outflows!

Investors believe much higher rates are coming, which will end the environment of negative nominal rates. This is detrimental for gold and silver, but this script, in which the economy is about to greatly recover in 2021 without further stimulus or additional monetization of the national debt, is unrealistic.

In the near-term, the trend is clear: gold is hated! 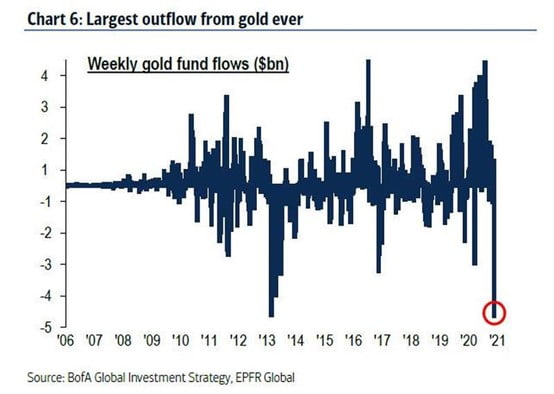 Money has exited gold at warp speed. Notice, though, that the catalyst for this sell-off is vaccination news, which is not the main driver for buying or selling gold. In other words, what just occurred revealed to the market what price discovery is projecting if we factor out COVID-19’s vaccination catalyst. Even if gold falls further, hitting $1,750 as technical analysis suggests, it’s still an incredibly profitable industry, with a global AISC (all-in sustaining cost) of $975/ounce and no major discoveries in years.

In other words, this shakeout actually highlights the profitability of mining companies and the scarcity of gold. If spot gold does fall below $1,800, we’d get interested in purchasing.

An important point to keep in mind is that most analysts and investors use either $1,450 or $1,500 as their value for gold when they judge any gold or silver mining stock for their portfolio.

Even before this sell-off, the market is convinced that $2,000 gold is not a long-term target, which is more evidence that gold is not in a bubble at all. 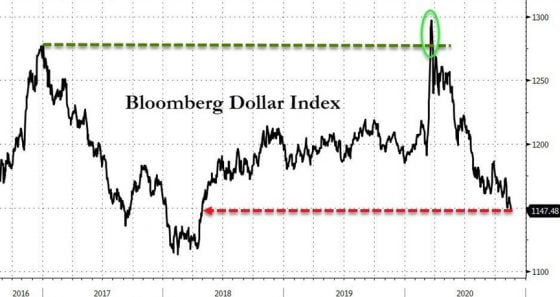 Gold’s severe sell-off comes because the notion is that interest rates are headed much higher, towards where they were before COVID-19, which is an interesting proposition since we believe that Washington will soon be forced into creating a massive stimulus package that investors are adamant about not pricing in.

We believe that the consensus of the market is mistaken. We not only assess that the USD is in a bear market, but that central banks are impatient about the gridlock in Washington and will be charging forward aggressively in order to “buy time” for politicians.

The use of debt is so alarming that it makes us wonder how anyone could save any significant sum in a fiat currency when it’s clearly a vehicle for wealth destruction.

In 2009, when gold peaked on November 2nd at $1,196, the markets also disregarded the metal, explaining that the worst was behind us. It retreated to $1,081 and stayed below its all-time high of $1,196 back then until April 2010, only truly breaking out again in July 2010. Said differently, it traded downwards and sideways for eight months. If we plot the same pattern now, its peak was on August 5th, which means that we should expect it to hit $2,000 again around the end of January but only truly break out towards March 2021.

Between now and then, we will present a number of companies to study and research because unlike with general equities, now trading at their highest-ever valuations, there are sensible multiples and speculative ideas in the mining sector.

Furthermore, we are also going to feature a number of compelling securities we ascribe a 5x to 10x potential to that are already GENERATING both REVENUES and PROFITS.