10 Signs That Obamacare Is Going To Wreck The U.S. Economy 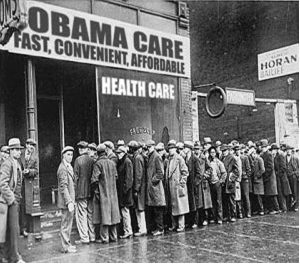 It is hard to find the words to adequately describe how much of a disaster Obamacare is turning out to be.  The debut of Healthcare.gov has been probably the worst launch of a major website in history, millions of Americans are having their current health insurance policies canceled, millions of others are seeing the size of their health insurance premiums absolutely explode, and this new law is going to result in massive numbers of jobs being lost.  It is almost as if Obamacare was specifically designed to wreck the U.S. economy.  Not that what we had before Obamacare was great.  In fact, I have long argued that the U.S. health care system is a complete and total train wreck.  But now Obamacare is making everything that was bad about our system much, much worse.  Americans are going to pay far more for health care, the quality of that care is going to go down, they are going to have to deal with far more medical red tape, and thousands upon thousands of U.S. employers are considering getting rid of the health plans that they offer to employees altogether due to Obamacare.  If the U.S. health care system was a separate nation, it would be the 6th largest economyon the entire planet, and now Obamacare is going to absolutely cripple it.  To say that Obamacare is an “economic catastrophe” would be a massive understatement.

Of course we were assured that it wouldn’t turn out this way.  We were promised over and over that we were going to pay less for health care, get better coverage, and be able to keep our current health plans if we were pleased with them.  The following is what Obama said at a rally in 2009…

That was such a dramatic lie that even NBC News is turning on him.  They discovered that Obama has known for three years that most people that rely on individual health insurance policies would not be able to keep them…

Buried in Obamacare regulations from July 2010 is an estimate that because of normal turnover in the individual insurance market, “40 to 67 percent” of customers will not be able to keep their policy. And because many policies will have been changed since the key date, “the percentage of individual market policies losing grandfather status in a given year exceeds the 40 to 67 percent range.”

That means the administration knew that more than 40 to 67 percent of those in the individual market would not be able to keep their plans, even if they liked them.

Pretty much everything that Obama told us when he was selling us on his plan has turned out to be a lie.

So what can we expect from Obamacare moving forward?  The following are 10 signs that Obamacare is going to wreck the U.S. economy…

#1 It is being projected that millions upon millions of Americans are going to lose their current health insurance plans thanks to Obamacare.  Most will be faced with the choice of either purchasing much more expensive health insurance or going uninsured.  This will put even more stress on a middle class that is already disintegrating rapidly.  The following is from the recent NBC News investigation mentioned above…

Four sources deeply involved in the Affordable Care Act tell NBC News that 50 to 75 percent of the 14 million consumers who buy their insurance individually can expect to receive a “cancellation” letter or the equivalent over the next year because their existing policies don’t meet the standards mandated by the new health care law. One expert predicts that number could reach as high as 80 percent. And all say that many of those forced to buy pricier new policies will experience “sticker shock.”

#2 The health insurance premium increases that some families are experiencing are absolutely mind boggling.  According to Mike Adams of Natural News, one family in Texas just got hit with a 539% rate increase…

Obamacare is named the “Affordable Care Act,” after all, and the President promised the rates would be “as low as a phone bill.” But I just received a confirmed letter from a friend in Texas showing a539% rate increase on an existing policy that’s been in good standing for years.

As the letter reveals (see below), the cost for this couple’s policy under Humana is increasing from $212.10 per month to $1,356.60 per month. This is for a couple in good health whose combined income is less than $70K — a middle-class family, in other words.

According to NBC News, an elderly couple in North Carolina was hit with a similar rate increase…

George Schwab, 62, of North Carolina, said he was “perfectly happy” with his plan from Blue Cross Blue Shield, which also insured his wife for a $228 monthly premium. But this past September, he was surprised to receive a letter saying his policy was no longer available. The “comparable” plan the insurance company offered him carried a $1,208 monthly premium and a $5,500 deductible.

Many Americans that were formerly in favor of Obamacare are now against it after they have seen what it is going to do to their budgets.  The following is one example of this from a recent Los Angeles Times article…

Pam Kehaly, president of Anthem Blue Cross in California, said she received a recent letter from a young woman complaining about a 50% rate hike related to the healthcare law.

“She said, ‘I was all for Obamacare until I found out I was paying for it,'” Kehaly said.

#3 Obamacare actually includes incentives for people to work less andmake less money.  The following is one example from a recent articleby Sean Davis…

In California, a couple earning $64,000 a year would not qualify for health care subsidies. A bronze plan for them through Kaiser would cost them about $1,300 each month, or $15,600 a year. But if that same family earned just $2,000 less, it would qualify for over $14,000 in annual health care subsidies, dropping their premiums for that same Kaiser plan to less than $100 per month.

#4 Thankfully the employer mandate in Obamacare was delayed for a little while, but it will ultimately result in widespread job losses all over the country.  In fact, we are already starting to see this happen.  The following is from a recent article in the Economist…

BEFORE the recession, Richard Clark’s cleaning company in Florida had 200 employees, about half of them working full time. These days it has about 150, with 80% part-time. The downturn explains some of this. But Mr Clark also blames Barack Obama’s health reform. When it comes into effect in January 2015, Obamacare will require firms with 50 or more full-time employees to offer them affordable health insurance or pay a fine of $2,000-3,000 per worker. That is a daunting prospect for firms that do not already offer coverage. But for many, there is a way round the law.

Mr Clark says he is “very careful with the threshold”. To keep his full-time workforce below the magic number of 50, he is relying more on part-timers. He is not alone. More than one in ten firms surveyed by Mercer, a consultancy—and one in five retail and hospitality companies—say they will cut workers’ hours because of Obamacare. A hundred part-timers can flip as many burgers as 50 full-timers, and the former will soon be much cheaper.

You can find a very long list of some of the employers that have either eliminated jobs or cut hours because of Obamacare right here.

CBS News has learned more than two million Americans have been told they cannot renew their current insurance policies — more than triple the number of people said to be buying insurance under the new Affordable Care Act, commonly known as Obamacare.

#7 If what is going on in New York is any indication, those that are signing up for health insurance under Obamacare are going to have a really, really hard time finding a doctor…

New York doctors are treating ObamaCare like the plague, a new survey reveals.

A poll conducted by the New York State Medical Society finds that 44 percent of MDs said they are not participating in the nation’s new health-care plan.

Another 33 percent say they’re still not sure whether to become ObamaCare providers.

Only 23 percent of the 409 physicians queried said they’re taking patients who signed up through health exchanges.

#8 Obamacare is turning out to be a gold mine for hackers and identity thieves.  The personal information of millions of Americans could potentially end up being compromised.  According to CNN, Healthcare.gov was found to be teeming with security holes…

The Obamacare website has more than annoying bugs. A cybersecurity expert found a way to hack into users’ accounts.

Until the Department of Health fixed the security hole last week, anyone could easily reset your Healthcare.gov password without your knowledge and potentially hijack your account.

And according to the New York Post, Healthcare.gov has been designed so badly from a security standpoint that it might have to be “rebuilt from scratch”…

The chairman of the House Intelligence Committee said ObamaCare’s website, already a tangled mess, might need to be rebuilt from scratch to to protect against cyber-thieves because he fears it’s not a safe place right now for health-care consumers to deposit their personal information.

“I know that they’ve called in another private entity to try to help with the security of it. The problem is, they may have to redesign the entire system,” Rep. Mike Rogers said on Sunday on CNN’s “State of the Union” political talk show. “The way the system is designed, it is not secure.”

#9 As I noted in a previous article, approximately 60 percent of all personal bankruptcies in the United States are related to medical bills.  Because millions of Americans are now losing their health insurance policies and millions of others will choose to pay the fine rather than sign up for Obamacare, more Americans than ever will find themselves overwhelmed with medical bills when they get seriously sick.  This will result in even more personal bankruptcies.

#10 In the end, the burden for paying for the subsidies that Obamacare offers is going to overwhelmingly fall on the taxpayers.  This is going to cause our nightmarish national debt to get even worse.  Peter Schiff recently explained why this is going to happen…

It is also ironic that high-deductible, catastrophic plans are precisely what young people should be buying in the first place. They are inexpensive because they provide coverage for unlikely, but expensive, events. Routine care is best paid for out-of-pocket by value conscious consumers. But Obamacare outlaws these plans, in favor of what amounts to prepaid medical treatment that shifts the cost of services to taxpayers. In such a system, patients have no incentive to contain costs. Since the biggest factor driving health care costs higher in the first place has been the over use of insurance that results from government-provided tax incentives, and the lack of cost accountability that results from a third-party payer system, Obamacare will bend the cost curve even higher. The fact that Obamacare does nothing to rein in costs while providing an open-ended insurance subsidy may be good news for hospitals and insurance companies, but it’s bad news for taxpayers, on whom this increased burden will ultimately fall.

So what do you think of Obamacare?

Has it directly affected your life yet?