Throughout history there has been one asset that, regardless of the type of crisis, has always been turned to in times of confusion and panic. Whether the crisis was financial, energy related, or involved global confrontation, individuals and governments alike have always turned to gold as a last resort. When currencies collapse, when governments lose credibility, and when people panic, precious metals have always been the sought after wealth preservation mechanism.

Modern-day opponents of gold as a medium of exchange argue that it is a relic of the past, and monetary systems of the 20th and 21st centuries no longer require its backing. Many will also argue that it can’t be eaten, and that its industrial applications lack significance.

Nonetheless, when it hits the fan, capital flocks to it.

Inflation is often given as the reasons for investing in gold, but as we’ve previously pointed out, inflation is only a symptom of other problems, and more a periphery driving mechanism for money flows headed towards gold. The real reason is and always has been crisis. When the private sector realizes that governments are incapable of mitigating or resolving the onset of crisis, gold has historically risen, just as it has in recent years.

Only recently has gold received any attention in the mainstream, likely because of it doubling in value the last three years. The long-term trend, however, started over a decade ago, when gold was trading under $300. The smart money began flowing into the precious metal early on, before it was on anyone’s radar. As governments around the world began to attack personal liberty and introduced more restrictive policies in the personal financial sphere with things like excessive taxes and fees, in financial markets, and as a result of terrorism, money began to run away from traditional assets. This move to gold has been ongoing since around the year 2000, and it continues today.

Whether you choose to invest in gold or not is a non-issue in terms of what gold is actually telling us. Famed forecaster and creator of a cyclical model dubbed the Economic Confidence Model, that has accurately predicted a host of events from the 1970’s through today, Martin Armstrong, says that gold is telling us exactly how, why and even when, events willÂ  unfold going forward. In his latest essay How and When, Armstrong provides some key insights:

The Middle East is not the big issue. We are facing a global famine and food crisis that is behind the political unrest. This is coming at a time when governments are broke. We have state and local governments in a debt crisis and that meltdown is VERY REAL!!!! Government is collapsing. That is the issue!

It is not even the geopolitical events that are really the meat and potatoes that drive gold. They are good for the short-lived rallies. What we are facing is a collapse of the global debt structure. That is very different from anything else.

THIS IS the big 800 pound gorilla in the room. Gaddaffi is noise. Inflation is noise. It is the DEBT DEFAULT that is the reason why gold will become exponential. These big types of exponential moves last normally about 11 months where markets may explode 3 to 5 times the starting value before the phase transition.

So far, gold is in a sideways phase that can build a significant base from which an extended bull market remains a real potential. The WORST IS YET TO COME insofar as the sovereign debt crisis. Yes, this entire global economy could be fixed in 30 days or less. However, the governments of the world would never never take such action and would rather see society crash and burn before they would ever listen and relinquish any power. So yes, there could be that extraordinary spike up that would be devastating forcing reform sooner rather than later.

The real key is the SOVEREIGN DEBT CRISIS. This is not about inflation in the traditional sense. This is about the collapse of the monetary system on a true wholesale basis.

What has taken place now, gold has surged higher post 2007 thanks to the same banks [that required help in the 90’s] requiring another bailout – TARP. The is not just inflation. We are on the verge of a currency meltdown this time.

The KEY is to see if GOLD begins to at last line up with the Economic Confidence Model. If that indeed takes place, this will signal, more than anything else, that we are in fact at the threshold of a serious economic event that will change the world over the next 8.6 years. The is not a question of if gold is trading up or down for speculative purposes. We are facing something FAR MORE significant than just a bull market in gold. This is the real leading indicator to watch at this time. It is a window to the future that we need to see what develops. Short-term, we have the low or spike high. Long-term, a low the week of 6/13/2011 is a warning for the next 8.6 years.

Martin Armstrong utilizes a specific cyclical model to determine dates and time lines. Before you dismiss him as just another forecaster trying to make date predictions, we encourage our readers to take some time to peruse his previous writings. We have no doubt that you will be amazed and potentially terrified by his accuracy over the course of the last four decades.

Of note is that Armstrong does not claim that he can predict stock market moves with this model. It is a general model that can be applied to finance, economics and geo-politics, and rather than identifying highs and lows in markets, it identifies turning points in economic confidence. Of importance is that there are literally tens of thousands of variables that affect this model – think a butterfly flapping its wings. In Armstrong’s own words:

The Economic Confidence Model is by no means a stock market model, gold, or anything else. It is the global unified frequency and we can correlate the world and begin to see that is the individual markets that align with that model BY THEIR OWN frequencies, that become the greatest receiver of capital concentration. This is why communism and socialism fail. They are working against the natural course of the economy. If everything were evenly distributed, there would be no book nor bust, but there would also be no liberty or progress. 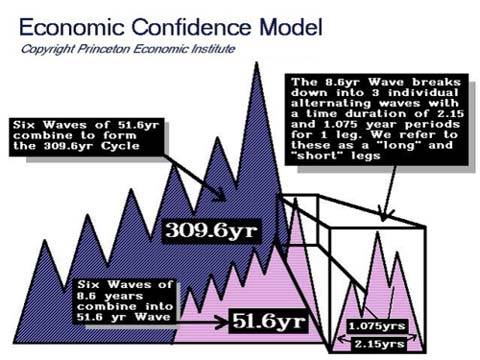 Key Points from the economic confidence model in recent years:

The June 13, 2011 cyclical turning point approaches. Armstrong utilizes the overall frequency of the ECM, along with technical analysis and timing to determine what may or not happen with gold.

If we see a major low in gold around June of this year, and if Armstrong’s model is correct, we could be facing a cataclysmic economic event, or events, over coming months and years.

We also urge our readers to keep their eye on the long-term. As we mentioned in our commentary on Chris Martenson’s recent piece The Coming Rout (In Stocks, Bonds, Commodities and Precious Metals), volatility will run rampant, so being concerned specifically with price is not as important as the overall trend. The response from global stock markets, commodities and precious metals with regards to the Japanese nuclear crisis is a perfect example of panic buying/selling. The herd will always act in unison during panic, and most will simply “sell everything” at the onset.

We firmly believe there is strong support for precious metals in the $1000 area, and those who have nowhere else to put their wealth because of collapsing stock markets and depreciating fiat currencies will turn to gold as a last resort – just as they have done historically. This will include individuals, financial firms, and even governments.

If the world is truly in a financial, economic and geo-political crisis, then gold will continue to shine, and remain a leading indicator that something abnormal is occurring on a global scale.

A Three Year Old With a Pocket Calculator Can Figure Out We Are Screwed! (2009)

How ALL Systems Can Collapse Overnight (2009)