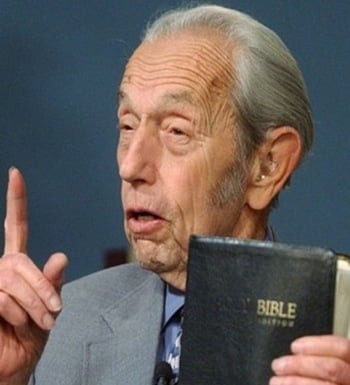 Followers of well-known Christian TV and radio host Harold Camping are preparing for the End of Days, slated to occur tommorow, May 21, 2011 at 6:00 PM in your local time zone.

Camping, who has made a living from his California based Family Radio Christian network since 1958 and has assets totaling in excess of $25 million, has been preaching since 2008 that the end of days would occur on exactly this day, at exactly this hour. While the exact number of his followers is not known, Camping’s success shows that they number in the tens of thousands world-wide.

Many of them believe tomorrow is it. It’s the beginning of the end. According to Camping’s interpretation of biblical prophecy, May 21 will begin with cataclysmic natural events at 6:00 PM around New Zealand and progress around the world every hour. That means at 6:00 PM tomorrow, no matter where you are in the world, you can expect earthquakes and other disasters. The rapture will kick off shortly thereafter with only a chosen few being taken to heaven. If you’re still on earth after the rapture, you can expect Armageddon – total destruction of everyone and everything on the planet. By October 21, 2011 it will all be over and the earth will reportedly be completely destroyed.

The Holy Bible, in Matthew 24:36, says, “No one knows about that day or hour, not even the angels in heaven, nor the Son, but only the Father.” Apparently, however, Brother Camping figured out the calculations necessary to determine when the end is nigh. According to Camping, the rapture begins exactly 7,000 years after Noah’s flood, and that day happens to be May 21, 2011.

It’s noteworthy to mention that Mr. Camping predicted the end of the world back in 1994, after which he claimed that his numbers were off. This time he’s certain.

He’s so sure, in fact, that hundreds, if not thousands, of his followers have liquidated their bank accounts to either enjoy their last days on earth or to donate those funds to the May 21, 2011 awareness campaign. Many of his die-hard believes are absolutely convinced.

We have no doubt that the world will end – eventually. We do however, have our doubts about tomorrow being that specific day, simply because so many “prophets” have made the same failed predictions for hundreds of years.

We’ll report back to our readers on May 22 with more info…or not.