You need to exert a HIGH LEVEL of fortitude to come out on the other side of September with your LIMBS INTACT.

This will be a brutal month for the markets, both because the political showdown is HEATING UP and because we’re officially in pullback territory, which without warning could turn into a FULL-BLOWN correction – investors will be soiling themselves after five months of PURE PROFITS. 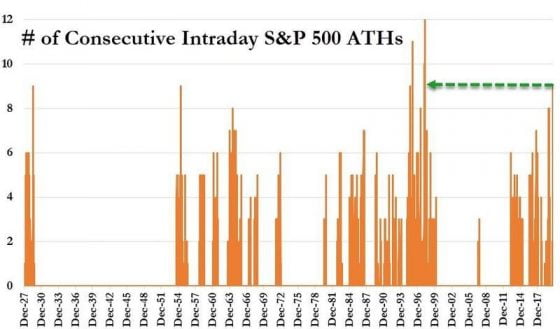 History is definitely telling us that we’ve entered a TRADING RANGE and that indices might CHURN FOR MONTHS, before continuing to go up; it’s a STOCK PICKER heaven, not a passive indexing environment, so be ready FOR THAT REALITY.

As you can see, the S&P 500 HAS CONCLUDED its lengthiest run of new all-time highs in 22 years, so that’s another warning sign that things are about to escalate.

It’s not only that – I’ve assembled a number of KEY METRICS that are irrefutable; the markets are so OVERDUE for a rest!

Here they are: Each and every 60-minute session, central banks have purchased BILLIONS in assets with new fictitious currency units since March. Secondly, bonds are SO MUCH more expensive than commodities that their ratio has hit a ONE HUNDRED-YEAR high (commodities are cheap)!

Thirdly, the FAAMG stocks are trading WILDLY ABOVE their 200dma, which worries me. 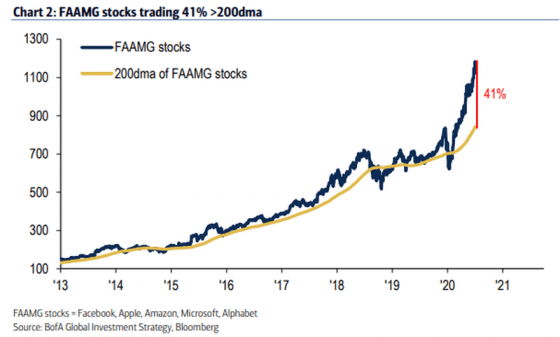 The one RIGHT CALL to make this year was to PANIC BUY in March, instead of getting the tremors with the rest of the world. Never in my trading career has the CONTRARIAN CALL been so evident!

Just a couple of weeks ago, we PUBLISHED OUR LATEST one, which is WATCH LIST 3.

Since stocks have RALLIED RELENTLESSLY, most of the companies are well above their bargain-priced noted limit orders.

The two that are MOST ATTRACTIVE and deserve further research on your part right now are Ciena (CIEN), which announced earnings and dropped 27% in a day (I personally took a position this week), and Spirit AeroSystems (SPR), which is a bet on the recovery in the airline business. I’m also a shareholder of it.

Lastly and MOST IMPORTANTLY, we’ve finished a 4-week long company-wide project, which we tasked ourselves with.

We wanted to be SUPER-READY for when gold surpasses its August 5th all-time high and silver RECHARGES and goes past $30/ounce, so we created the ULTIMATE risk-adjusted portfolio of four companies, initially, with the goal to add 6-8 more companies to it in the COMING WEEKS and months!

Use it as a point of reference to CONDUCT INDEPENDENT due diligence. Access it HERE!

In 2020, we’ve had enormous winners in the resource sector with previously profiled companies; here’s to the streak CONTINUING FOR US ALL!