What’s causing this unbelievable volatility? In one word, it’s the election. This November 3rd, the world’s leading economy, the one that holds the reserve currency status, could erupt into chaos.

The markets were sure that Biden will win due to the polls, which they couldn’t believe would be wrong again, but the reality is proving much more complicated.

For one, Hunter Biden’s scandal is getting suppressed at 20x the force that the bullion banks depressed silver at the turn of the decade. If Trump’s son was in the same shoes, there would have been no COVID-19 coverage anymore – his recordings would be playing 24/7 and spreading like fire on all social media platforms.

The United States media has lost all credibility and any sense of fairness or dignity. 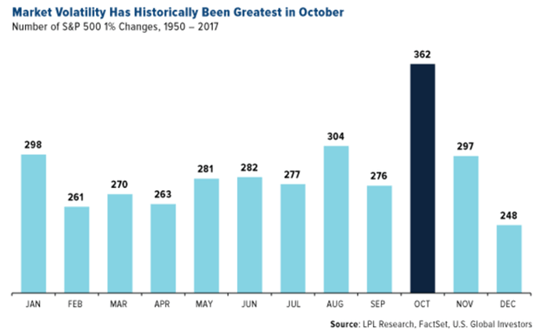 October is notoriously the most volatile month of the calendar year, and the NASDAQ 100 is very close to another flash correction (-10%).

What we’re hearing from Jeff Gundlach, David Einhorn, and Stanley Druckenmiller is distressing and alarming. Gundlach is predicting a revolution this decade. Einhorn has called the top of the tech bubble (as of September 2nd). Druckenmiller is on edge.

Going back more than 120 years, the data shows that October is a unique month; for some reason, the biggest market crashes occur within this calendar month.

As you can see, the tech bubble of today is only half as expensive as the one in the 2000s, so before we start predicting a great depression 2.0, know that we personally don’t treat this volatility as the telltale signs of a huge meltdown.

We acknowledge the fact that stocks are expensive, but we also know that times are different.

Therefore, keep “living” what’s going on instead of looking to build fantasy scripts in your mind like the ones I read about every day that forecast -80% drops as if those occur every Monday morning.

The worst black swan event in a century only managed to move markets down by -35% in March, so think of what -80% really entails… 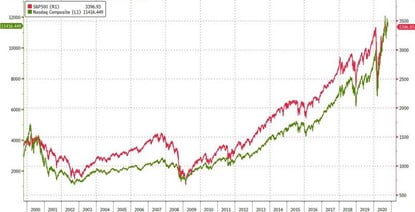 We live in a world of expensive assets and zero-percent interest rates. At some point in the coming years, the whole thing will have to be reversed, neutralized, or reset – IT’S MADNESS.

On the other side of this chaos, I expect the motherlode of all stimulus packages – wait for fireworks, even if they take a couple of months to kick in.

Governments are under severe threat of existential legitimacy and people want money. They will GET IT, and that is a clear catalyst for commodities.