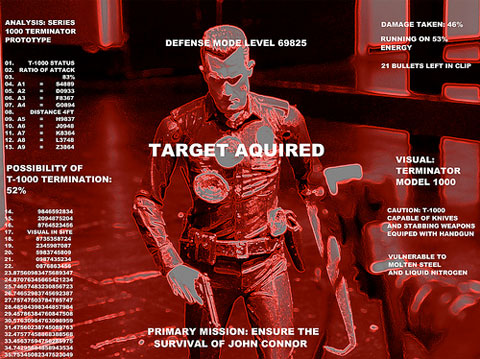 For now, the technology is in “crude” form undergoing R&D through animal testing, specifically with the neural connections of a zebrafish.

In the longer term, DARPA researchers (the Pentagon’s Defense Advanced Research Projects Agency) believes the gene modifying optical technology will be able to restore vision to the blind and impaired, and replaced current conceptions of virtual reality, with an internal display that will provide vital stats and more about the target, err, object in view.

According to CNET, the DARPA boffins are reportedly working on a device known as a ‘cortical modem’ that plugs directly into a person’s DNA and visual cortex. Not only does this unique device help someone overcome blindness or poor eyesight, it generates a built-in heads-up display (HUD) that appears right in before their very eyes.

The implants create an augmented reality projection that appears like magic in your natural vision and without the need for helmets or special eyeglasses. (source)

The visual overlay could be developed, as in the Schwarzenegger “Terminator” films, like an automatic panel of information that meshes seamlessly with the real world, or it could integrate interactive “Minority Report”-style panels, but internally. Regardless, the implications are fantastic, and perhaps, unsettling.

Though it is hardly the first DARPA foray into brain implants, this technology represents a new breakthrough, as it requires modification to a person’s DNA, an application of optogenetics that bypasses our natural visual sensory system and makes use of what is, for now anyway, a simple $10 devices that produces the LED-like display:

“The implications of this project are astounding,” wrote Peter Rothman of Humanity+ Magazine, who was in attendance at the event. “First, this technology could be used to restore sensory function to individuals who simply can’t be treated with current approaches. Second, the device could replace all virtual reality and augmented reality displays.”

“Bypassing the visual sensory system entirely, a cortical modem can directly display into the visual cortex enabling a sort of virtual overlay on the real world,” he added. “Moreover, the optogenetics approach allows both reading and writing of information. So we can imagine at least a device in which virtual objects appear well integrated into our perceived world.” (source)

Researchers believe that, though still far from completion, this would make science fiction tech possible, even opening the door to telekinesis and telepathy:

The possibilities go even further, though, Rothman said. The cortical modem could potentially make electronic telepathy and telekinesis possible, and could make the neural interfaces made popular by science fiction writer’s a reality. Those advances are still a long way off, however, as the cortical modem in its current form is still, in Rothman’s words, a “crude” device.

While it might be billed as an incredible cure for blindness, the implications for the military battlefield are immense.

As many dystopic films and futurists like Ray Kurzweil have long predicted, these neural implants, modifications and “upgrades” are ripe for the making of super-soldiers, capable of making human warriors more-human-than-human and capable of given autonomous robots and AI computers a lopsided advantage against conventional enemies in any conflict.

Before you daydream about the “cool” visions of the future to be, keep in mind that the computer geeks have once again warned that the rise of AI and nanotechnology literally threatens the survival of civilization. A Global Challenges Foundation report was concerned about the extinction of the human race and a coming mass unemployment of the human workforce:

“Such extreme intelligences could not easily be controlled (either by the groups creating them, or by some international regulatory regime), and would probably act to boost their own intelligence and acquire maximal resources for almost all initial AI motivations,” suggest authors Dennis Pamlin and Stuart Armstrong.

“And if these motivations do not detail the survival and value of humanity, the intelligence will be driven to construct a world without humans. This makes extremely intelligent AIs a unique risk, in that extinction is more likely than lesser impacts.”

The report also warns of the risk that “economic collapse may follow from mass unemployment as humans are replaced by copyable human capital”, and expresses concern at the prospect of AI being used for warfare: “An AI arms race could result in AIs being constructed with pernicious goals or lack of safety precautions.”

So what is closer on the horizon: the end of life as we know it, or the next big thing?