Martin Armstrong is the former chairman of Princeton Economics and the Foundation for the Study of Cycles. As a cyclical theorist and economist Armstrong has predicted a variety of economic events, in many cases to the very day, including the stock market crash of 1987 and the precise movements of gold throughout the 1970’s up until the very top of the market in the early 1980’s. His models are not based on just economic data points, but specific historical cycles going back over 2000 years.

If you’ve never heard of Martin Armstrong, it’s probably because he has been sitting in a federal prison for nearly ten years. The official story is that Armstrong was imprisoned for manipulation and financial schemes, however, he was never tried by a jury of his peers. Conspiracy theories abound regarding Martin Armstrong, with Armstrong himself suggesting that he was thrown behind bars because the powers-that-be believed he was manipulating the world economy with his cyclical models – models which Armstrong vehemently refused to turn over to the government and interested parties, namely Goldman Sachs and the Central Intelligence Agency. To this day, only Martin Armstrong knows the location of the source code for his forecasting models, and he has been held in contempt of court for nearly a decade as a result.

The questions surrounding his imprisonment, along with the fact that his forecasting models have been dead on for the last thirty years, suggests that Martin Armstrong may be on to something. Just as we have been able to identify simple cycles within complex systems like how the planets revolve around the sun or ocean tides, Armstrong may have unlocked cycles within the economy and even politics, as evidenced by his 224 year economic confidence model, which can be applied, in hindsight, to events dating back to before the Roman Empire.

How good is he? Here is an excerpt from Armstrong’s December 4, 2008 essay The Coming Great Depression which provided target dates and specific pricing ranges for the Dow Jones:

We will see new highs in the Down long before we see the final low in the economy. The ideal lows on a timing basis for the stock market will be as soon as April 2009 or by June of 2009.

We did, in fact, experience lows in the stock markets on March 6, 2009 and with the Dow hitting 6,626. If Armstrong’s models are in any way accurate, we should be very happy that we did not see the Dow go lower to the 4,000 mark and that the Fed and Plunge Protection Team pumped the financial system with trillions of dollars to keep the stock market moving, otherwise, we may have very well gone into a hyper-inflationary scenario in 2009. For those who are unprepared for such a crisis, the government bought you some time.

We are now looking back a year and we’ve seen significant growth in the stock market. We have government and corporate bond yields rising (and thus the value is falling) and gold has hit all nominal highs. With Greece potentially getting ready for a sovereign default within the next 90 days, the rest of the PIIGS lining up to follow, a seemingly stalled US recovery and a very polarized political environment not just in the US but around the globe, we may be approaching yet another turning point.

In his 2008 article, referenced above, Armstrong pointed out some intermediate cyclical turning points, one of them being in January of 2010, where we saw a minor pullback in stocks, and the other falling on April 16 of this year:

The more pronounced lows would be due on a timing basis between December 2009 and April 2010. The most extreme target would seem to be August 2010. The shorter the resolution to the stock market low, the sooner we will start to see much higher volatility.
…

A year-end [2008] closing beneath this general level will signal that we could see the sharp decline to test the extreme support at 3,600 – 4,000 by as early as April 19, 2009 going into May/June 2009. If we were to drop so quickly into these targets, this would be most likely the major low with a significant railly into at least April 16th, 2010.
The less volatile outcome would be a prolonged decline into December 2009 target to about April 16, 2010.

Those who were are the 1985 Princeton Economic conference in Princeton, may want to review those video tapes. The volatility we were looking at 20-30 years into the future is now. As 3 of the 5 major investment bankers failed, Merryl, Leman and Bear, the liquidity has evaporated so the swings are going to be much more dramatic.

As you can see, cyclical forecasting is not an exact science, but Armstrong’s models, which consider not just financial numbers and bonds yields, but geo-political events and capital flows, seem to be fairly accurate on identifying overall trends. Take for example, the fact that US Treasury yields have been steadily rising for the last few months, the dollar index is back over 80, Greece is ready to explode, and mass protests are scheduled for April 15 – 18 across the country. Something is happening, and though the April 16 target date could be a ‘top’ or ‘bottom’ in just about anything, it seems that we are sitting on a powder keg.

Though we can not say for sure what, if anything, will happen on April 16, 2010, it is clear that Armstrong is predicting (and has been since 1985) that volatility is the name of the game – which means unless you are in the know, get out of the stock market. If we have volatility in the stock market, you can be assured that there is volatility in non-financial aspects of the world as well.

SHTf Plan follows a variety of indicators provided to us by the writings of Martin Armstrong, Howard Katz, Harry Dent, Bert Dohmen, Marc Faber and the Foundation for the Study of Cycles via Weiss Research, we are not yet ready to provide our own timing “call” for the stock market crash which we believe is inevitable at this point.

We do however, believe that we could see a turn in this rally sometime in the next several months. Specific dates are difficult, if not impossible to call because of the rampant global manipulation of everything from stocks, to currencies, to gold, but in the end, nature will always win out.

The next major cyclical turning point according Armstrong? Keep an eye out for a major economic confidence turning point on June 13, 2011. 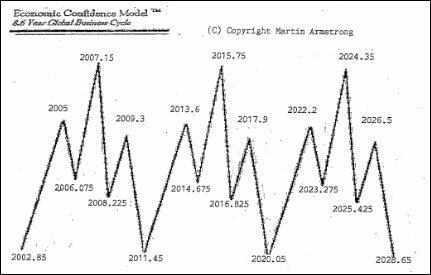 A Three Year Old With a Pocket Calculator Can Figure Out We Are Screwed! [October 1, 2009]