8 Reasons Why Silver Is the Investment of the Decade

If there’s one asset that’s heated up over the last several months amid tensions in the middle east and a second round of the Federal Reserve’s quantitative easing, it’s silver. The price has risen so dramatically, some 20% since January 1, 2011 through today, that investors may be wondering what actions they should take. For those who have not acquired the precious metal, the obvious question is, should I buy now or is silver in bubble territory? Those fortunate enough to have seen the crisis writing on the wall in 2008 and before, and have seen a 200% or more increase in the value on their holdings to date, may be considering selling and locking in profits.

No one can predict what happens next. The fact that silver has “gone to the moon” as metals bugs like to say, should raise awareness and caution in any diligent investor. After all, the last time we saw such meteoric price rises in the summer of 2008, when stocks, commodities and home prices were reaching all-time highs, and precious metals were pushing higher than they had in twenty years, it ended very badly for anyone invested in just about any asset other than the US dollar.

Is there cause for alarm today? Are silver and gold, along with equities and commodities, destined to see yet another massive correction or collapse, as they did when the markets bottomed out in late 2008 and early 2009? The trigger for the last asset crash was blamed, in part, on rising oil prices and food costs, and we are very clearly approaching similar territory today. If gas prices reach that $4.50 mark like they did before many experts, both mainstream and contrarian, have voiced their opinionsÂ  that the economy will revert back to no-growth or negative growth, completely disintegrating any semblance of recovery that has been perpetrated on the American people and global populace.

The end result, as in 2008, will likely be a collapse in asset prices.

But will precious metals once again collapse along with equities and commodities, or have we reached the long awaited ‘decoupling’ phase, where tangible assets and historical monetary instruments diverge from traditional paper investments like stocks, or debt based assets like real estate? A similar decoupling occurred in the 1930’s, when the Dow Jones and gold assets went their own way: 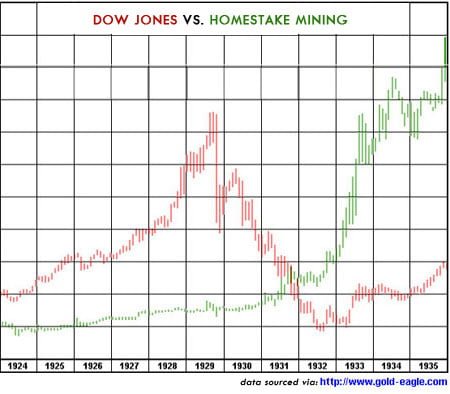 According to the chart below, silver versus the Dow Jones has outperformed significantly, with the Dow experiencing a collapse versus silver of 86% over the last ten years: 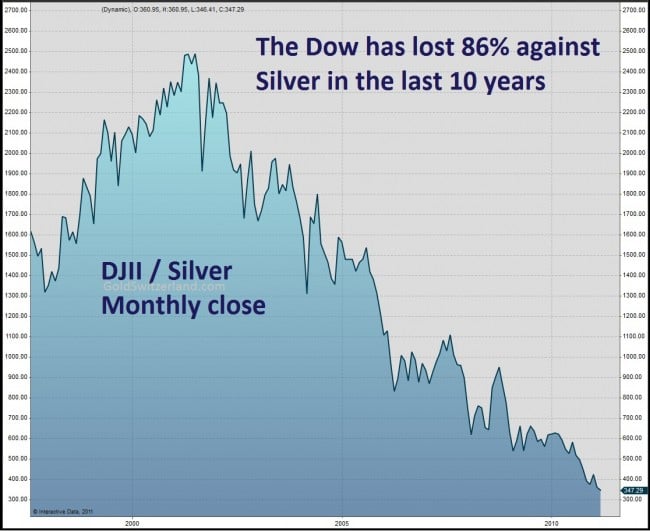 The above chart indicates that we are already seeing a decoupling in terms of value.

Whether you are a new investor deciding whether or not you are going to buy silver at today’s prices, or are currently holding silver related assets and considering whether or not to sell or buy more, we suggest watching the following interview with trusted analyst and financial manager Eric Sprott, whose Sprott Physical Silver Trust is one of the very few “paper” investments that is physically backed with vault-stored (never to be leased) precious metals.

In his latest interview with Canada’s Business News Network, Sprott provides some key reasons for why silver, although priced much higher today than ten years ago, will continue to rise and likely become one of the top performing investments of this decade. According to Sprott, there are various data points that “scream at you that the price of silver has to go higher.”

Before you sell, consider the following reasons for why silver may be the best investment of the decade:

2. Supply and Delivery Challenges for Physical Bullion. In a market that trades roughly 400 million (paper) ounces a day, when Sprott Asset Management was preparing to open their physical silver trust they had difficulty acquiring just 15 million ounces. Other evidence direct from the US Mint further solidifies this point. The Mint recently advised potential investors that it can longer coin the popular Silver American Eagle saying, “The United States Mint will resume production of American Eagle Silver Uncirculated Coins once sufficient inventories of silver bullion blanks can be acquired to meet market demand for all three American Eagle Silver Coin products.”

3. Technological demand for silver is increasing. In 2010 industrial production of silver was up 18% due to rising demand from the technology sector. Among other things, silver is increasingly being used in computers, cell phones, and solar panels. Health care, alternative and traditional, is another market segment that will see silver demand increase because of silver’s antibiotic properties. It’s already being used in bandages, clothing, and medical devices.

4. Silver is closing the margin on the gold-to-silver ratio. Historically, though not in recent decades, silver has traded at an average ratio of about 16-to-1. It is currently trading at about 40-to-1, and just recently was trading at nearly 70-to-1. If the historical ratio of gold to silver holds up, then if gold is priced at $1600 an ounce, silver would need to be trading at about $100. If gold were to trade at $3000 an ounce, a prediction made by several contrarian precious metals analysts, silver would trade at $300 if the gold-to-silver ratio returned to historical norms.

5. There is a silver shortage. We’ve already discussed the supply issues that many investors taking large deliveries may be experiencing. But, there is also a pricing disconnect occurring, that indicates supply problems, at least in the short-term, are prevalent. According to Sprott and other analysts, forward looking silver prices indicate that a silver shortage exists. The phenomenon of price “backwardation” is one way of being able to identify this. Though there are millions of ounces in the ground, backwardation can mean there is simply not enough of an asset available right now. Sprott, for example, says that when they purchased the aforementioned 15 million ounces of silver, some of it wasn’t even minted until two weeks after they made the purchase, suggesting that existing inventory is simply not available.

6. More (Paper) Money. As the US Federal Reserve and central banks around the world continue to deal with fiscal issues through monetary means, more and more paper currency hits the global marketplace. As a result, more money is chasing fewer goods, with silver being one of those goods. For the reasons above, as well as the fact that there is more money available, the price of silver will continue to “inflate,” just like other hard assets. Over the last 100 years, since the Federal Reserve was established, the US dollar has lose some 95% of its value. This is a long-term 100 year trend, and given the current policies of the Fed, which are no different than the policies of the last century, the US dollar will continue to depreciate.

7. Gold for Main Street. While an ounce of gold may cost $1500, silver is significantly cheaper, giving working individuals and families the ability to invest without having to spend this month’s mortgage on a coin. Silver is available in various weights and mintages, from one ounce government issue coins like silver eagles to one-hundred ounce poured bars from Johnson Matthey. In addition, for newer investors, though fake silver exists, the risk to the investor is much lower because of the price, and investors can choose US “junk silver” coins like pre-1965 half dollars, quarters and dimes for easily identifiable and tradeable instruments. With silver, anyone who has a desire to do so can become their own central bank.

8. Crisis. Inflation is often identified as the single biggest reason for why precious metals like gold and silver rise. However, this is not always the case. During the 1990’s, a period where inflation was anywhere from 1% to 6% annually, the price of gold and silver barely moved. There was simply no investor demand. One of the reasons for this may have been because during the 90’s, the US was experiencing a period of boom. It was the advent of the internet and the general mood was positive. Stocks were rising and were the primary investment vehicle of choice during the technology boom. Gold and silver took a back seat. After the technology crash and September 11th, however, sentiment changed. As boom times gave way to recession, precious metals rose. They continued to rise as governments, namely in the US, passed more restrictive laws on everything from personal liberty to capital investment. When countries start restricting freedoms, people tend to shift capital. Throughout the first decade of the 21st century, this may have been the primary reason for gold and silver’s powerful rise. After the collapse of 2008, more and more investors began to realize that crisis is upon us. The government, failing to mitigate the problem, and likely making it even worse, forced those in traditional investments into the safe haven historical assets of choice – gold and silver. Thus, while inflation may play a part in the rise of precious metals, it is the perception that government is unable to deal with crisis that has been the real driving force. As the economic crisis continues to deepen, civil unrest breaks out around the world, and citizens lose faith in their government’s ability to manage crisis, the prices of precious metals, the last vestige of monetary security, will continue to rise.