“Greece Just Blew Up the Death Star of Debt”: A Way Out of Euro Bondage 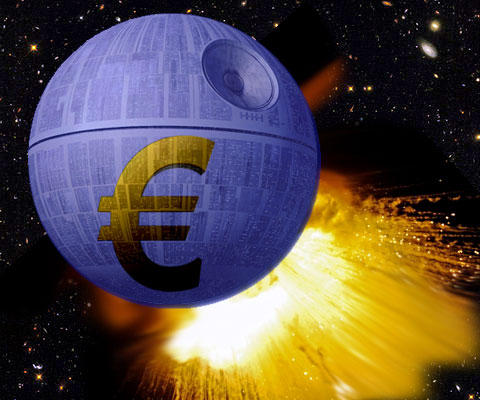 This article was originally published by Charles Hugh Smith at Of Two Minds.

Editor’s Note: Basically, we’ve been acclimated to the idea that have various European monetary powers of each of its nations is normal, and worth preserving at any cost. But there is nothing natural about this union. It benefits the bankers the most, and burdens both the pocket books of Europeans paying for the bailouts of Greece and the other nations, and punishes the Greeks with austerity they see as a form of slavery and bondage imposed by a European master.

Whether Greece implements sound economic reforms or not, and otherwise gets things under control, it would be stronger on its own two feet. The yoke of the European Central Bank and the euro is not going to accomplish reforms or make anything better… Charles Hugh Smith argues that an independent Greece would have the incentive to actually be responsible with its financial obligations.

Greece Just Blew Up the Empire’s Death Star of Debt

The Greek Elites and kleptocrats are terrified of the discipline that leaving the euro will impose, but the general public should welcome the transition to an economy and society that has been freed from the shackles of Imperial debt and the kleptocracy that has bled the nation dry.

Although the financial media is blathering about negotiations and gamesmanship, the truth is Greece just blew up the Empire’s Death Star of debt. There’s nothing left to negotiate except the official admission that the Imperial Death Star of debt, the most fearsome threat in the galaxy, has been blown to smithereens.

There are three fundamental points that need to be emphasized, mostly because they’ve been lost in handwringing, fearmongering and the ceaseless chatter of propaganda shills.

1. Impaired debt and defaults result from imprudent underwriting and lender incompetence/ greed. Since when did it become accepted policy to reward imprudent lending, incompetence and greed?

Classical Capitalism is very clear on what should happen to lenders who ignored risk management; they get destroyed. As imprudently issued loans default, the losses pile up and the lender become insolvent. At that point, Capitalism kicks in and the management is fired, the stock goes to zero, the lender’s assets are auctioned off and the creditors are issued whatever remains after wages, taxes, accounts payable, etc. are paid.

There’s nothing complicated about it: Capitalism requires the discipline of losses being taken by those responsible, the firing of incompetents and the destruction of imprudent lenders.

Yet somehow the dominant narrative has reversed this essential core of Capitalism into blaming the borrower for the losses.

Look, if someone offers to loan me a billion dollars with no collateral and no assessment of the risks that I might not be able to pay the interest or principal, then who’s the fool? The idiot who wants to give me $1 billion without any risk assessment, or the borrower who takes the “free money” being offered?

Yes, no one should borrow money that they can’t pay back, blah blah blah, but the primary fiduciary responsibility is on the lender to not offer loans to marginal borrowers and those at high risk of defaulting on their debts.

Let’s set aside the propaganda for a moment and get real: anyone with the slightest knowledge of Greek finances and the power structure of the Greek economy/society knew it was insanely risky to loan Greece billions of euros. No one can deny this, yet somehow the lenders deserve to be paid for their avarice, stupidity, incompetence and total disregard for the standards of prudent lending? No, they deserve to be destroyed–closed down and their assets auctioned off.

2. Greece will not be wiped out by leaving the euro currency–it will be freed to rebuilt itself with prudent fiscal management and policies that reward investment and penalize risky borrowing, speculation and corruption.

Here’s the thing about Greece issuing its own fiat currency–it will force fiscal discipline in a way that the euro did not and could not. This is why the Greek Status Quo is quivering with fear–the gravy train of irresponsibility enabled by the euro is ending, and they are terrified of living within their means and having to face the discipline that the market will impose on the Greek fiat currency.

If there’s one thing Greece needs more than anything, it’s the discipline and the rewards of the market. Any nation that issues its own fiat currency has a choice: it can exercise fiscal prudence and enforce policies that reward entrepreneurism, prudent lending, savings, wise investments, fair taxation, etc., or it can try to prop up its bloated, corrupt kleptocracy by printing rivers of fiat money.

If it chooses the Dark Side and prints money in excess, it will soon drive the value of that currency to near-zero. The kleptocracy that hoped to benefit from money-printing is impoverished or forced to move their capital elsewhere.

In other words, Greece returning to being responsible for its own currency is a good thing. The new currency will be valued cheaply relative to other currencies at first, and this is also a good thing, as imports will be unaffordable for all but the wealthy (kiss BMW sales in Greece good-bye) and everything produced in Greece becomes a bargain globally.

This will attract capital seeking places where it can make a profit and is treated fairly, and it will enable Greece to rebuild its export sector and boost its substantial tourist trade.

The promise that marginal borrowers would be transformed into sterling-credit borrowers by adopting the euro was always a fantasy–and a painfully visible fantasy at that. Anyone with their eyes even partially open could see that the vast differences in productivity, credit, risk and culture between the eurozone nations made the euro unworkable from the start.

It was equally visible that the eurozone’s inept policies and loose lending standards would obscure these fundamental differences until the damage would be too great to hide–which is exactly what transpired.

3. The hundreds of billions of euros in so-called bailouts did not help Greece–all they did was bail out imprudent lenders and Euroland Elites. Virtually none of these vast sums helped the Greek nation or its people; what little did stay in Greece flowed to the kleptocrats that continued to rule Greece.

The harsh reality of misrule and corruption was recently spelled out in Misrule of the Few: How the Oligarchs Ruined Greece:

“Greece has failed to address (rising wealth/income inequality) because the country’s elites have a vested interest in keeping things as they are. Since the early 1990s, a handful of wealthy families — an oligarchy in all but name — has dominated Greek politics. These elites have preserved their positions through control of the media and through old-fashioned favoritism, sharing the spoils of power with the country’s politicians. Greek legislators, in turn, have held on to power by rewarding a small number of professional associations and public-sector unions that support the status quo. Even as European lenders have put the country’s finances under a microscope, this arrangement has held.”

Greece just blew up the Death Star of debt, and now the threat has been lifted from other debtor nations suffering from the yoke of Imperial misrule. The Greek Elites and kleptocrats are terrified of the discipline that leaving the euro will impose, but the general public should welcome the transition to an economy and society that has been freed from the shackles of Imperial debt and the kleptocracy that has bled the nation dry.