WATCH: Man Almost Dies When He Shoots A Refrigerator Full Of Explosives 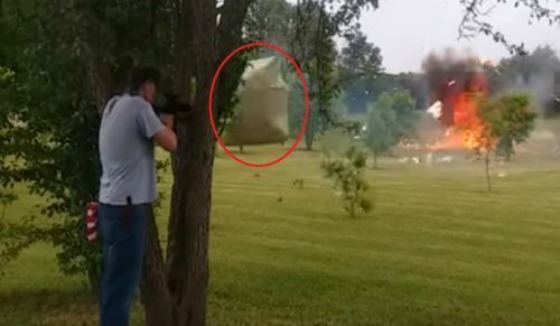 A viral video in which a man shoots a refrigerator door is causing an internet firestorm. The refrigerator is shown exploding after being shot with a rifle, and the door nearly ends the shooter’s life.

The man in the video obviously enjoys living life on the edge. The video posted on the Internet shows a man firing an what looks like an M-16 rifle at a refrigerator stocked with Tannerite. Tannerite is a widely sold and very popular exploding target specially geared toward gun owners. It consists of a mixture of ammonium nitrate and aluminum powder, is legal, and available at sporting-goods stores and websites. But it’s fair to say that it isn’t meant to be packed inside a refrigerator with intentions to shoot said fridge.

Complete with his American flag handkerchief stuffed in his back pocket, the man takes aim and hits the refrigerator with a bullet, only to be almost hit by the door. The refrigerator explodes sending its door flying right past him on his left.

*There is some strong language in this video, and it may not be suitable for those at work.

The video went viral, generating over 515,000 views on YouTube.  Luckily, he was standing behind a tree, which afforded him a little bit of protection against the flying refrigerator door. The end of the video shows the men involved in this stunt walking toward the flaming remains of the exploded refrigerator.

He’s also told by his friends, “That door was coming right for you, dude!” But oddly, the man doing the shooting didn’t seem like he was all that concerned that his life was on the line. He does, however, quickly remove himself from the path of the rogue door.

Perhaps because of his odd reaction, some seem to think this video is faked. One comment from an article written by the Daily Mail says:

“Looks impressive but its faked. The bush to the man’s left is too close to the tree for the door to pass without knocking it over. If you look carefully the trunk of the bush doesn’t move an inch while the animators made the leaves move. An object like that traveling at that rate of speed would have stripped the leaves and branches off both the bush and the tree. Impressive but fake.”

The video has propelled a debate online about the legality and availability of Tannerite, although it’s likely here to stay for the foreseeable future. Those afraid of guns will continue to be scared and those who own guns will find the humor and lesson in this video. What are your thoughts? Fake?