Why Most Of The Western Half Of The U.S. Is Completely Unsuitable For Strategic Relocation 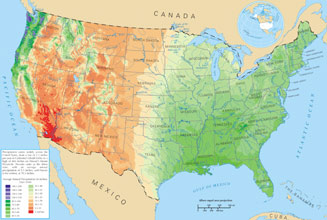 If there is one thing that you cannot live without, it is fresh water.  Just try it some time.  Seriously – try to live for 24 hours without using a single drop of fresh water.  You will quickly learn how indispensable it is.  Unfortunately, a lot of people that are “strategically relocating” to another part of the United States are not taking the availability of fresh water seriously when making the decision about where to move.  If you live in an area that receives very little precipitation and that is not close to a consistent source of fresh water, what would you do if something happened and the water got shut off?  Without water, you cannot grow food, you cannot cook, you cannot wash your clothes, you cannot take a bath and you cannot even use the toilet.  The most basic things that we do in life are totally dependent on the availability of fresh water.  So why are so many “preppers” considering moving to some of the driest areas of the entire country?

Thanks to the drought that never seems to end, there are some southwestern cities that are now rapidly running out of water.  Just check out what is happening right now in one city in Arizona…

In the northern Arizona city of Williams, restaurant patrons don’t automatically get a glass of water anymore. Residents caught watering lawns or washing cars with potable water can be fined. Businesses are hauling water from outside town to fill swimming pools, and building permits have been put on hold because there isn’t enough water to accommodate development.

And in some areas of southern Nevada, the authorities are actually paying people to remove their lawns because there is so little water.

So why would anyone that wants to become independent of the system actually move to those areas?

Over in California, the multi-year drought just continues to get even worse.  In fact, the Climate Prediction Center says that the drought in California is likely to intensify throughout this upcoming summer.  As a result, we could soon witness an unprecedented water emergency in the state.  In a recent article, I quoted a New York Times piece that discussed how some rural communities in Californiawill soon have no water to drink…

The punishing drought that has swept California is now threatening the state’s drinking water supply.

With no sign of rain, 17 rural communities providing water to 40,000 people are in danger of running out within 60 to 120 days. State officials said that the number was likely to rise in the months ahead after the State Water Project, the main municipal water distribution system, announced on Friday that it did not have enough water to supplement the dwindling supplies of local agencies that provide water to an additional 25 million people. It is first time the project has turned off its spigot in its 54-year history.

If you truly are interested in strategic relocation, you should want to avoid such areas like the plague. 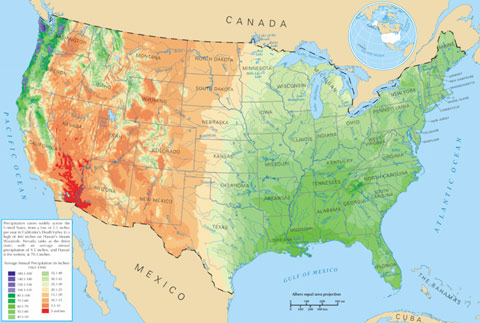 If you do want to move somewhere in the western half of the country, you need to choose carefully.

Personally, I would generally avoid the west coast completely.  As the Ring of Fire continues to heat up, it is going to become increasingly likely that we will see major earthquakes and/or significant volcanic activity along the west coast.  For many more reasons why the west coast is a concern, and why I would particularly avoid the state of California, please see my previous article entitled “16 Reasons To Move Away From California“.

Once you get past the west coast, there are very few areas that are not really dry until you reach the middle part of the country.

For example, it has been estimated that the state of New Mexico only has a 10 year supply of fresh water left.

So why would anyone want to “strategically relocate” there?

Or just take a look at what is happening to Lake Powell.  It is fed by the once mighty Colorado River, but at this point the flow of water into the lake has been reduced to a “trickle”…

After 14 years of drought, Lake Powell is less than half full.

Water flows into Lake Powell, nestled between Utah and Arizona, from high in the Rocky Mountains via the Colorado River. More than 30 million people in seven states depend on the mighty Colorado for water to grow crops, fuel power plants and keep cities such as Las Vegas alive. But this year, the worst drought in a century has slowed the flow to a trickle.

In August, the federal Bureau of Reclamation cut, by 9 percent, the amount of water people in the southwestern United States could draw from Lake Powell. As states and counties squabble over their allotment of water in the coming years, hydroelectric plants (including the one on the Hoover Dam) could idle, and farmers are bracing for reduced crop production.

It is hard to believe, but the Colorado River doesn’t even run all the way to the ocean any longer.  If something is not done fairly soon, even the Hoover Dam could be forced to shut down eventually.  For much more on all of this, please see this article.

Over in Texas, drought conditions have helped fuel an epidemic of wildfires in recent years.  In fact, a major wildfire in Texas made national news headlines on Monday…

A wildfire that raced through a North Texas community destroyed or damaged 100 homes and forced evacuation of thousands of people, authorities said Monday.

Wildfires burned an astounding 3.6 million acres in the state of Texas during 2011 alone.

That is something to consider when choosing a place to live.

I am not saying that preppers cannot make it in the areas that I just mentioned.  But you have got to do your research, because according to some scientists we could potentially be facing “a century-long megadrought“.

The truth is that last century was far wetter than usual in the western half of North America.  During that era, we built teeming cities in the desert and we farmed vast areas that are usually bone dry…

Scientists say their research shows the 20th century was one of the wettest centuries in the past 1,300 years. During that time, we built massive dams and rerouted rivers. We used abundant water to build major cities and create a $45 billion agriculture industry in a place that used to be a desert.

But now things are returning to “normal”, and that is creating a crisis of epic proportions.

And the goal of most preppers should be to avoid crisis areas.

Survival expert James Wesley Rawles recommends an area that he calls “the American Redoubt” that includes parts of Montana, Idaho, eastern Washington and eastern Oregon.  As you can see from the map, there is quite a bit of green in those areas.  So if you are seriously considering relocating, perhaps you should take another look at that part of the country.

For most of our lives, most of us have been able to take water completely for granted.  But that is going to change.  We are entering a time when the entire globe is going to be facing a massive water crisis.

Right now, an astounding 60 percent of all groundwater in China is already too polluted to drink, and one recent UN report projected that two-thirds of all the people in the world will be dealing with “water stress” and 1.8 billion people will be facing “absolute water scarcity” by the year 2025.

So if you are interested in “strategic relocation”, the availability of fresh water should be near the top of your list of considerations.

Without an independent supply of fresh water, it would be foolish to ever think that you are actually “prepared” for much of anything.